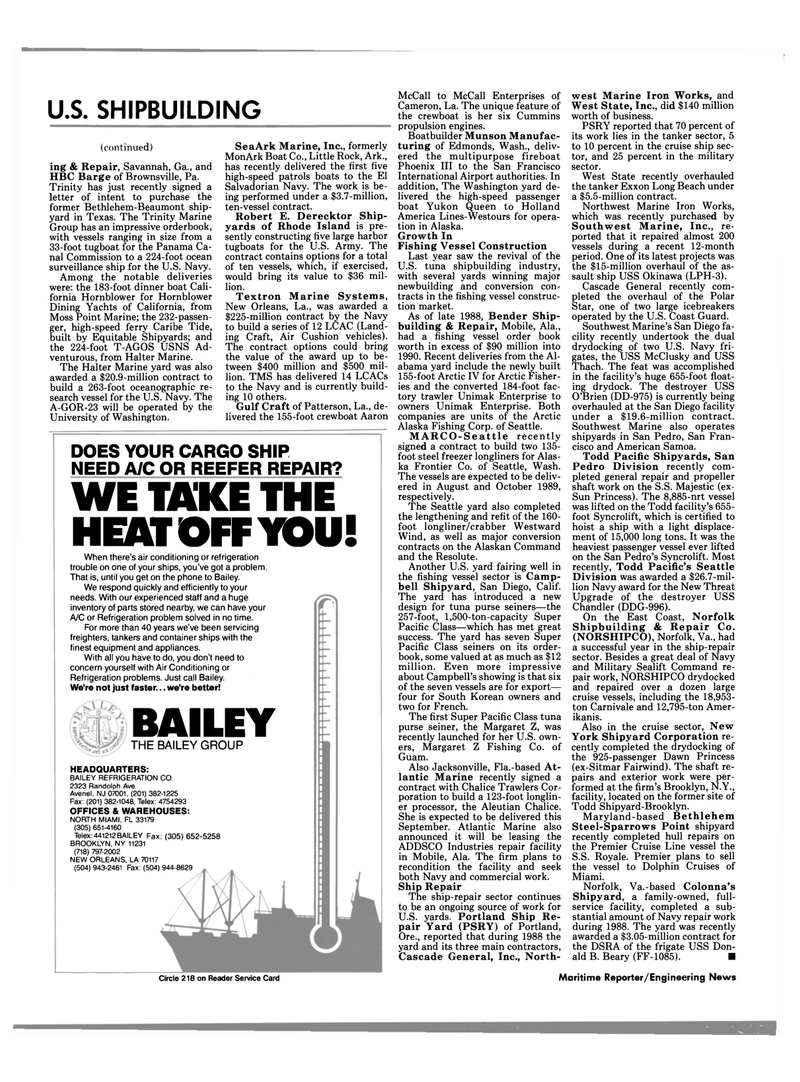 Trinity has just recently signed a letter of intent to purchase the former Bethlehem-Beaumont ship- yard in Texas. The Trinity Marine

Group has an impressive orderbook, with vessels ranging in size from a 33-foot tugboat for the Panama Ca- nal Commission to a 224-foot ocean surveillance ship for the U.S. Navy.

Among the notable deliveries were: the 183-foot dinner boat Cali- fornia Hornblower for Hornblower

Dining Yachts of California, from

The Halter Marine yard was also awarded a $20.9-million contract to build a 263-foot oceanographic re- search vessel for the U.S. Navy. The

A-GOR-23 will be operated by the

Salvadorian Navy. The work is be- ing performed under a $3.7-million, ten-vessel contract.

Robert E. Derecktor Ship- yards of Rhode Island is pre- sently constructing five large harbor tugboats for the U.S. Army. The contract contains options for a total of ten vessels, which, if exercised, would bring its value to $36 mil- lion.

New Orleans, La., was awarded a $225-million contract by the Navy to build a series of 12 LCAC (Land- ing Craft, Air Cushion vehicles).

The contract options could bring the value of the award up to be- tween $400 million and $500 mil- lion. TMS has delivered 14 LCACs to the Navy and is currently build- ing 10 others.

DOES YOUR CARGO SHIP

When there's air conditioning or refrigeration trouble on one of your ships, you've got a problem.

That is, until you get on the phone to Bailey.

We respond quickly and efficiently to your needs. With our experienced staff and a huge inventory of parts stored nearby, we can have your

A/C or Refrigeration problem solved in no time.

For more than 40 years we've been servicing freighters, tankers and container ships with the finest equipment and appliances.

With all you have to do, you don't need to concern yourself with Air Conditioning or

McCall to McCall Enterprises of

Cameron, La. The unique feature of the crewboat is her six Cummins propulsion engines.

Phoenix III to the San Francisco

Last year saw the revival of the

As of late 1988, Bender Ship- building & Repair, Mobile, Ala., had a fishing vessel order book worth in excess of $90 million into 1990. Recent deliveries from the Al- abama yard include the newly built 155-foot Arctic IV for Arctic Fisher- ies and the converted 184-foot fac- tory trawler Unimak Enterprise to owners Unimak Enterprise. Both companies are units of the Arctic

The vessels are expected to be deliv- ered in August and October 1989, respectively.

Wind, as well as major conversion contracts on the Alaskan Command and the Resolute.

Pacific Class seiners on its order- book, some valued at as much as $12 million. Even more impressive about Campbell's showing is that six of the seven vessels are for export— four for South Korean owners and two for French.

She is expected to be delivered this

September. Atlantic Marine also announced it will be leasing the

ADDSCO Industries repair facility in Mobile, Ala. The firm plans to recondition the facility and seek both Navy and commercial work.

Ore., reported that during 1988 the yard and its three main contractors,

Northwest Marine Iron Works, which was recently purchased by

Southwest Marine, Inc., re- ported that it repaired almost 200 vessels during a recent 12-month period. One of its latest projects was the $15-million overhaul of the as- sault ship USS Okinawa (LPH-3).

Cascade General recently com- pleted the overhaul of the Polar

Star, one of two large icebreakers operated by the U.S. Coast Guard.

Thach. The feat was accomplished in the facility's huge 655-foot float- ing drydock. The destroyer USS

O'Brien (DD-975) is currently being overhauled at the San Diego facility under a $19.6-million contract.

Sun Princess). The 8,885-nrt vessel was lifted on the Todd facility's 655- foot Syncrolift, which is certified to hoist a ship with a light displace- ment of 15,000 long tons. It was the heaviest passenger vessel ever lifted on the San Pedro's Syncrolift. Most recently, Todd Pacific's Seattle

Division was awarded a $26.7-mil- lion Navy award for the New Threat

Upgrade of the destroyer USS

On the East Coast, Norfolk

Shipbuilding & Repair Co. (NORSHIPCO), Norfolk, Va., had a successful year in the ship-repair sector. Besides a great deal of Navy and Military Sealift Command re- pair work, NORSHIPCO drydocked and repaired over a dozen large cruise vessels, including the 18,953- ton Carnivale and 12,795-ton Amer- ikanis.

Also in the cruise sector, New

York Shipyard Corporation re- cently completed the drydocking of the 925-passenger Dawn Princess (ex-Sitmar Fairwind). The shaft re- pairs and exterior work were per- formed at the firm's Brooklyn, N.Y., facility, located on the former site of

S.S. Royale. Premier plans to sell the vessel to Dolphin Cruises of

Shipyard, a family-owned, full- service facility, completed a sub- stantial amount of Navy repair work during 1988. The yard was recently awarded a $3.05-million contract for the DSRA of the frigate USS Don- ald B. Beary (FF-1085). •