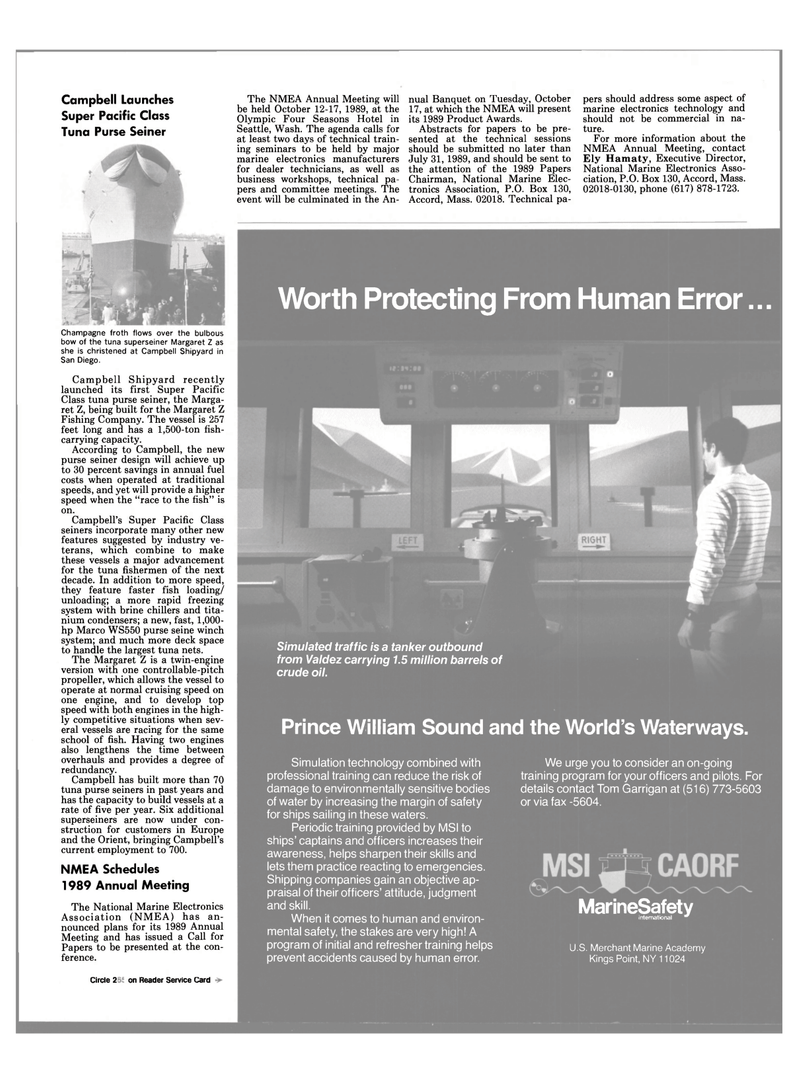 Seattle, Wash. The agenda calls for at least two days of technical train- ing seminars to be held by major marine electronics manufacturers for dealer technicians, as well as business workshops, technical pa- pers and committee meetings. The event will be culminated in the An- nual Banquet on Tuesday, October 17, at which the NMEA will present its 1989 Product Awards.

Accord, Mass. 02018. Technical pa- pers should address some aspect of marine electronics technology and should not be commercial in na- ture.

For more information about the

Fishing Company. The vessel is 257 feet long and has a 1,500-ton fish- carrying capacity.

According to Campbell, the new purse seiner design will achieve up to 30 percent savings in annual fuel costs when operated at traditional speeds, and yet will provide a higher speed when the "race to the fish" is on.

Campbell's Super Pacific Class seiners incorporate many other new features suggested by industry ve- terans, which combine to make these vessels a major advancement for the tuna fishermen of the next decade. In addition to more speed, they feature faster fish loading/ unloading; a more rapid freezing system with brine chillers and tita- nium condensers; a new, fast, 1,000- hp Marco WS550 purse seine winch system; and much more deck space to handle the largest tuna nets.

The Margaret Z is a twin-engine version with one controllable-pitch propeller, which allows the vessel to operate at normal cruising speed on one engine, and to develop top speed with both engines in the high- ly competitive situations when sev- eral vessels are racing for the same school of fish. Having two engines also lengthens the time between overhauls and provides a degree of redundancy.

Campbell has built more than 70 tuna purse seiners in past years and has the capacity to build vessels at a rate of five per year. Six additional superseiners are now under con- struction for customers in Europe and the Orient, bringing Campbell's current employment to 700.

Association (NMEA) has an- nounced plans for its 1989 Annual

Meeting and has issued a Call for

Papers to be presented at the con- ference.

Worth Protecting From Human Error...

Simulation technology combined with professional training can reduce the risk of damage to environmentally sensitive bodies of water by increasing the margin of safety for ships sailing in these waters.

Periodic training provided by MSI to ships' captains and officers increases their awareness, helps sharpen their skills and lets them practice reacting to emergencies.

When it comes to human and environ- mental safety, the stakes are very high! A program of initial and refresher training helps prevent accidents caused by human error.