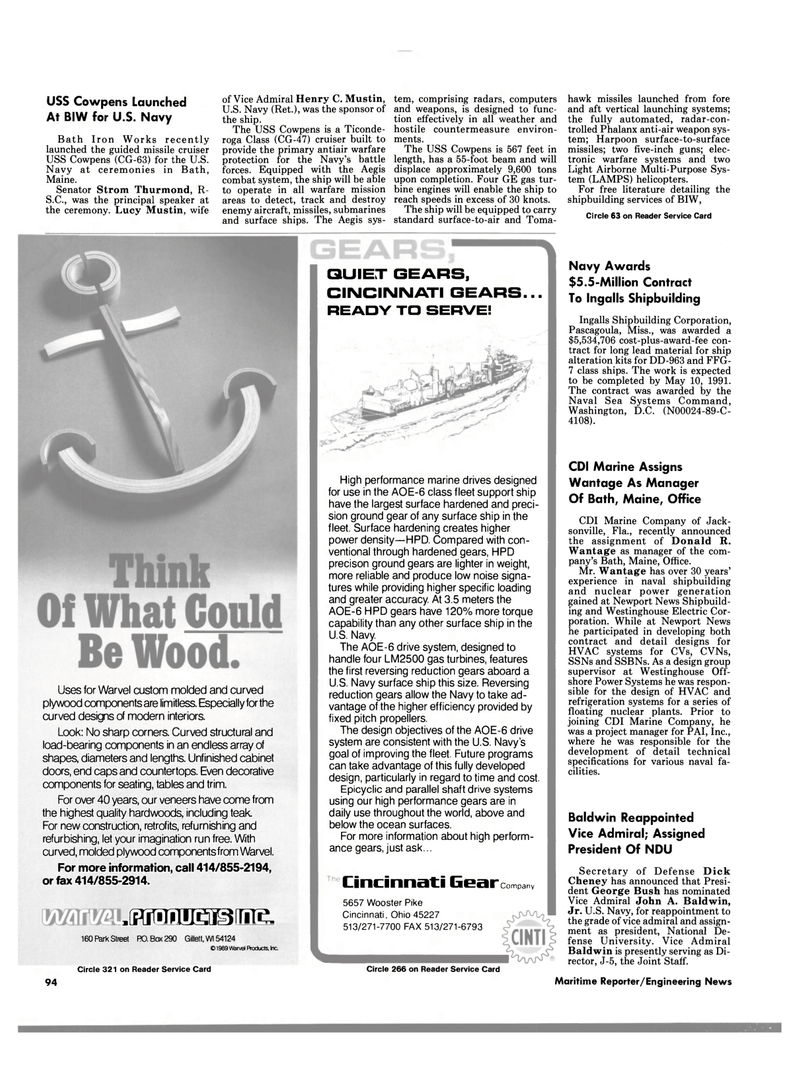 At BIW for U.S. Navy

Navy at ceremonies in Bath,

The USS Cowpens is a Ticonde- roga Class (CG-47) cruiser built to provide the primary antiair warfare protection for the Navy's battle forces. Equipped with the Aegis combat system, the ship will be able to operate in all warfare mission areas to detect, track and destroy enemy aircraft, missiles, submarines and surface ships. The Aegis sys- tem, comprising radars, computers and weapons, is designed to func- tion effectively in all weather and hostile countermeasure environ- ments.

The USS Cowpens is 567 feet in length, has a 55-foot beam and will displace approximately 9,600 tons upon completion. Four GE gas tur- bine engines will enable the ship to reach speeds in excess of 30 knots.

For free literature detailing the shipbuilding services of BIW,

Uses for Warvel custom molded and curved plywood components are limitless. Especially for the curved designs of modern interiors.

Look: No sharp corners. Curved structural and load-bearing components in an endless array of shapes, diameters and lengths. Unfinished cabinet doors, end caps and countertops. Even decorative components for seating, tables and trim.

For over 40 years, our veneers have come from the highest quality hardwoods, including teak.

The design objectives of the AOE-6 drive system are consistent with the U.S. Navy's goal of improving the fleet. Future programs can take advantage of this fully developed design, particularly in regard to time and cost.

Epicyclic and parallel shaft drive systems using our high performance gears are in daily use throughout the world, above and below the ocean surfaces.

Wantage as manager of the com- pany's Bath, Maine, Office.

Mr. Wantage has over 30 years' experience in naval shipbuilding and nuclear power generation gained at Newport News Shipbuild- ing and Westinghouse Electric Cor- poration. While at Newport News he participated in developing both contract and detail designs for

SSNs and SSBNs. As a design group supervisor at Westinghouse Off- shore Power Systems he was respon- sible for the design of HVAC and refrigeration systems for a series of floating nuclear plants. Prior to joining CDI Marine Company, he was a project manager for PAI, Inc., where he was responsible for the development of detail technical specifications for various naval fa- cilities.

Cheney has announced that Presi- dent George Bush has nominated

The contract was awarded by the