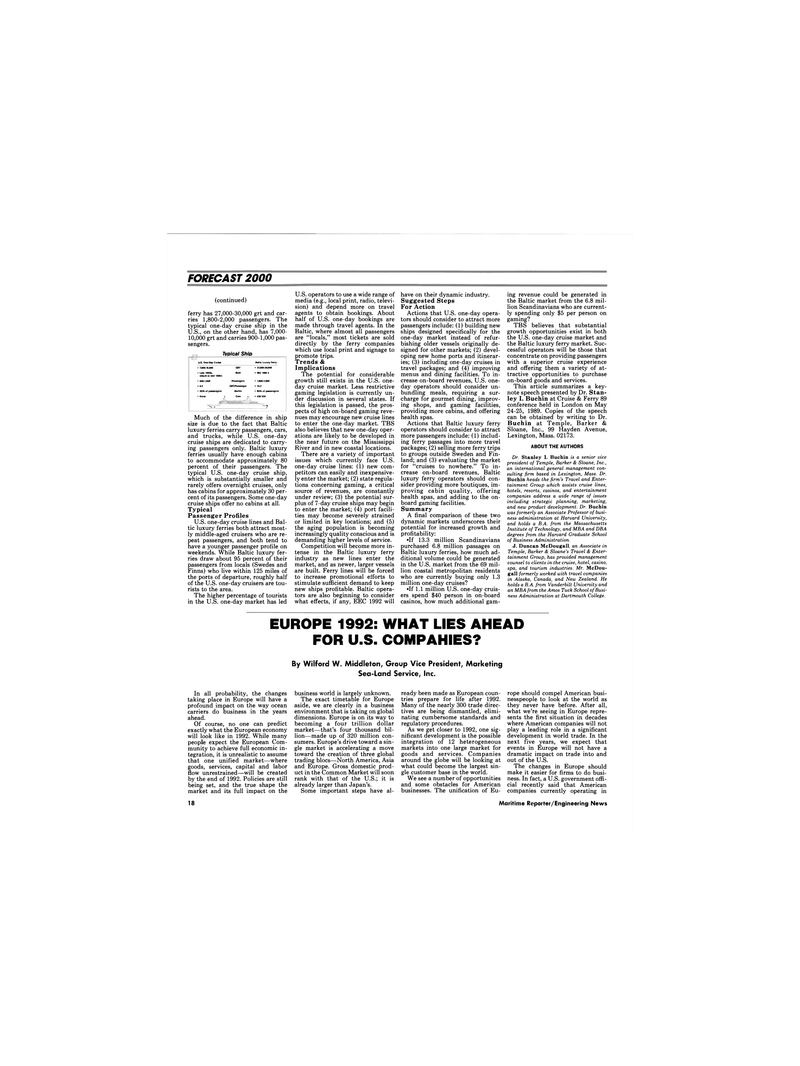 U.S. one-day cruise lines and Bal- tic luxury ferries both attract most- ly middle-aged cruisers who are re- peat passengers, and both tend to have a younger passenger profile on weekends. While Baltic luxury fer- ries draw about 95 percent of their passengers from locals (Swedes and

Finns) who live within 125 miles of the ports of departure, roughly half of the U.S. one-day cruisers are tou- rists to the area.

The higher percentage of tourists in the U.S. one-day market has led

U.S. operators to use a wide range of media (e.g., local print, radio, televi- sion) and depend more on travel agents to obtain bookings. About half of U.S. one-day bookings are made through travel agents. In the

Baltic, where almost all passengers are "locals," most tickets are sold directly by the ferry companies which use local print and signage to promote trips.

The potential for considerable growth still exists in the U.S. one- day cruise market. Less restrictive gaming legislation is currently un- der discussion in several states. If this legislation is passed, the pros- pects of high on-board gaming reve- nues may encourage new cruise lines to enter the one-day market. TBS also believes that new one-day oper- ations are likely to be developed in the near future on the Mississippi

River and in new coastal locations.

There are a variety of important issues which currently face U.S. one-day cruise lines: (1) new com- petitors can easily and inexpensive- ly enter the market; (2) state regula- tions concerning gaming, a critical source of revenues, are constantly under review; (3) the potential sur- plus of 7-day cruise ships may begin to enter the market; (4) port facili- ties may become severely strained or limited in key locations; and (5) the aging population is becoming increasingly quality conscious and is demanding higher levels of service.

Competition will become more in- tense in the Baltic luxury ferry industry as new lines enter the market, and as newer, larger vessels are built. Ferry lines will be forced to increase promotional efforts to stimulate sufficient demand to keep new ships profitable. Baltic opera- tors are also beginning to consider what effects, if any, EEC 1992 will have on their dynamic industry.

A final comparison of these two dynamic markets underscores their potential for increased growth and profitability: •If 13.3 million Scandinavians purchased 6.8 million passages on

Baltic luxury ferries, how much ad- ditional volume could be generated in the U.S. market from the 69 mil- lion coastal metropolitan residents who are currently buying only 1.3 million one-day cruises? •If 1.1 million U.S. one-day cruis- ers spend $40 person in on-board casinos, how much additional gam- ing revenue could be generated in the Baltic market from the 6.8 mil- lion Scandinavians who are current- ly spending only $5 per person on gaming?

TBS believes that substantial growth opportunities exist in both the U.S. one-day cruise market and the Baltic luxury ferry market. Suc- cessful operators will be those that concentrate on providing passengers with a superior cruise experience and offering them a variety of at- tractive opportunities to purchase on-board goods and services.

This article summarizes a key- note speech presented by Dr. Stan- ley I. Buchin at Cruise & Ferry 89 conference held in London on May 24-25, 1989. Copies of the speech can be obtained by writing to Dr.

Institute of Technology, and MBA and DBA degrees from the Harvard Graduate School of Business Administration.

J. Duncan McDougall, an Associate in

In all probability, the changes taking place in Europe will have a profound impact on the way ocean carriers do business in the years ahead.

Of course, no one can predict exactly what the European economy will look like in 1992. While many people expect the European Com- munity to achieve full economic in- tegration, it is unrealistic to assume that one unified market—where goods, services, capital and labor flow unrestrained—will be created by the end of 1992. Policies are still being set, and the true shape the market and its full impact on the business world is largely unknown.

The exact timetable for Europe aside, we are clearly in a business environment that is taking on global dimensions. Europe is on its way to becoming a four trillion dollar market—that's four thousand bil- lion—made up of 320 million con- sumers. Europe's drive toward a sin- gle market is accelerating a move toward the creation of three global trading blocs—North America, Asia and Europe. Gross domestic prod- uct in the Common Market will soon rank with that of the U.S.; it is already larger than Japan's.

Some important steps have al- ready been made as European coun- tries prepare for life after 1992.

Many of the nearly 300 trade direc- tives are being dismantled, elimi- nating cumbersome standards and regulatory procedures.

As we get closer to 1992, one sig- nificant development is the possible integration of 12 heterogeneous markets into one large market for goods and services. Companies around the globe will be looking at what could become the largest sin- gle customer base in the world.

We see a number of opportunities and some obstacles for American businesses. The unification of Eu- rope should compel American busi- nesspeople to look at the world as they never have before. After all, what we're seeing in Europe repre- sents the first situation in decades where American companies will not play a leading role in a significant development in world trade. In the next five years, we expect that events in Europe will not have a dramatic impact on trade into and out of the U.S.

The changes in Europe should make it easier for firms to do busi- ness. In fact, a U.S. government offi- cial recently said that American companies currently operating in 18 Maritime Reporter/Engineering News