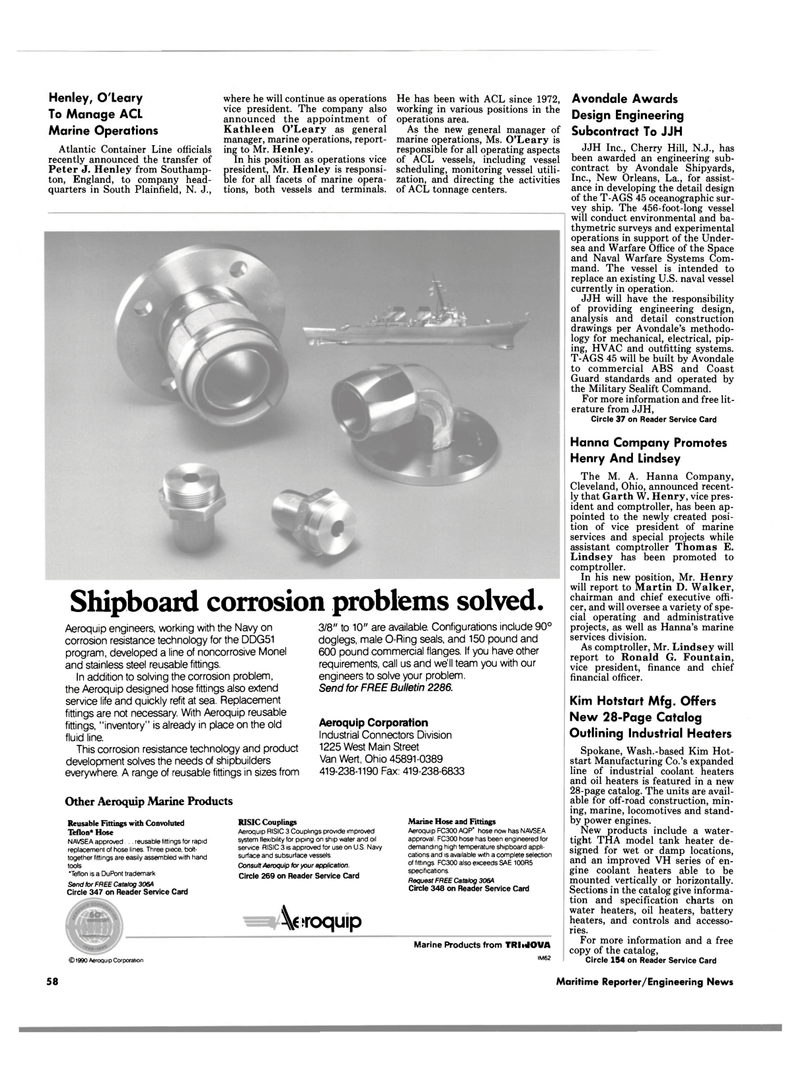 Peter J. Henley from Southamp- ton, England, to company head- quarters in South Plainfield, N. J., where he will continue as operations vice president. The company also announced the appointment of

In his position as operations vice president, Mr. Henley is responsi- ble for all facets of marine opera- tions, both vessels and terminals.

He has been with ACL since 1972, working in various positions in the operations area.

As the new general manager of marine operations, Ms. O'Leary is responsible for all operating aspects of ACL vessels, including vessel scheduling, monitoring vessel utili- zation, and directing the activities of ACL tonnage centers.

Aeroquip engineers, working with the Navy on corrosion resistance technology for the DDG51 program, developed a line of noncorrosive Monel and stainless steel reusable fittings.

In addition to solving the corrosion problem, the Aeroquip designed hose fittings also extend service life and quickly refit at sea. Replacement fittings are not necessary. With Aeroquip reusable fittings, "inventory" is already in place on the old fluid line.

This corrosion resistance technology and product development solves the needs of shipbuilders everywhere. A range of reusable fittings in sizes from 3/8" to 10" are available. Configurations include 90° doglegs, male O-Ring seals, and 150 pound and 600 pound commercial flanges. If you have other requirements, call us and we'll team you with our engineers to solve your problem.

Send for FREE Catalog 306A

Consult Aeroquip for your application.

Inc., New Orleans, La., for assist- ance in developing the detail design of the T-AGS 45 oceanographic sur- vey ship. The 456-foot-long vessel will conduct environmental and ba- thymetric surveys and experimental operations in support of the Under- sea and Warfare Office of the Space and Naval Warfare Systems Com- mand. The vessel is intended to replace an existing U.S. naval vessel currently in operation.

Guard standards and operated by the Military Sealift Command.

For more information and free lit- erature from JJH,

The M. A. Hanna Company,

Lindsey has been promoted to comptroller.

In his new position, Mr. Henry will report to Martin D. Walker, chairman and chief executive offi- cer, and will oversee a variety of spe- cial operating and administrative projects, as well as Hanna's marine services division.

Sections in the catalog give informa- tion and specification charts on water heaters, oil heaters, battery heaters, and controls and accesso- ries.

For more information and a free copy of the catalog,