Read this page in Pdf, Flash or Html5 edition of May 1991 Maritime Reporter Magazine 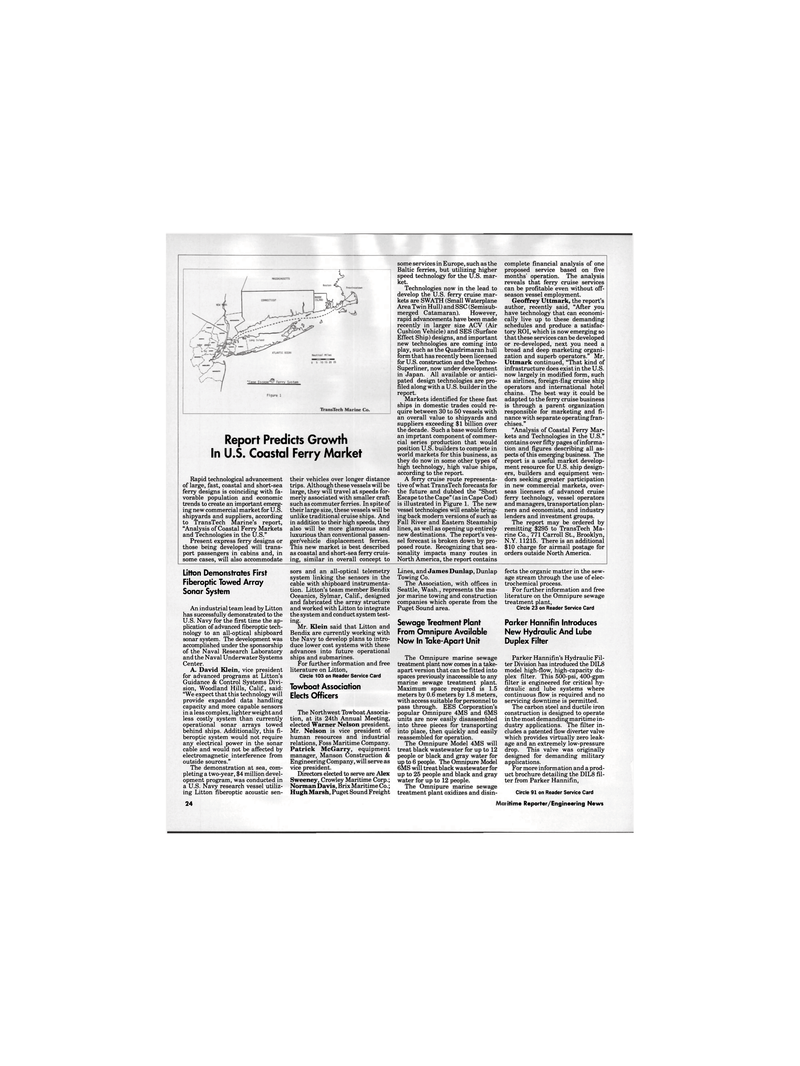 Rapid technological advancement of large, fast, coastal and short-sea ferry designs is coinciding with fa- vorable population and economic trends to create an important emerg- ing new commercial market for U.S. shipyards and suppliers, according to TransTech Marine's report, "Analysis of Coastal Ferry Markets and Technologies in the U.S."

Present express ferry designs or those being developed will trans- port passengers in cabins and, in some cases, will also accommodate their vehicles over longer distance trips. Although these vessels will be large, they will travel at speeds for- merly associated with smaller craft such as commuter ferries. In spite of their large size, these vessels will be unlike traditional cruise ships. And in addition to their high speeds, they also will be more glamorous and luxurious than conventional passen- ger/vehicle displacement ferries.

This new market is best described as coastal and short-sea ferry cruis- ing, similar in overall concept to some services in Europe, such as the

Area Twin Hull) and SSC (Semisub- merged Catamaran). However, rapid advancements have been made recently in larger size ACV (Air

Effect Ship) designs, and important new technologies are coming into play, such as the Quadrimaran hull form that has recently been licensed for U.S. construction and the Techno-

Superliner, now under development in Japan. All available or antici- pated design technologies are pro- filed along with a U. S. builder in the report.

Markets identified for these fast ships in domestic trades could re- quire between 30 to 50 vessels with an overall value to shipyards and suppliers exceeding $1 billion over the decade. Such a base would form an imprtant component of commer- cial series production that would position U.S. builders to compete in world markets for this business, as they do now in some other types of high technology, high value ships, according to the report.

Escape to the Cape" (as in Cape Cod) is illustrated in Figure 1. The new vessel technologies will enable bring- ing back modern versions of such as

Fall River and Eastern Steamship lines, as well as opening up entirely new destinations. The report's ves- sel forecast is broken down by pro- posed route. Recognizing that sea- sonality impacts many routes in

North America, the report contains complete financial analysis of one proposed service based on five months' operation. The analysis reveals that ferry cruise services can be profitable even without off- season vessel employment.

Geoffrey Uttmark, the report's author, recently said, "After you have technology that can economi- cally live up to these demanding schedules and produce a satisfac- tory ROI, which is now emerging so that these services can be developed or re-developed, next you need a broad and deep marketing organi- zation and superb operators." Mr.

Uttmark continued, "That kind of infrastructure does exist in the U.S. now largely in modified form, such as airlines, foreign-flag cruise ship operators and international hotel chains. The best way it could be adapted to the ferry cruise business is through a parent organization responsible for marketing and fi- nance with separate operating fran- chises." "Analysis of Coastal Ferry Mar- kets and Technologies in the U.S." contains over fifty pages of informa- tion and figures describing all as- pects of this emerging business. The report is a useful market develop- ment resource for U.S. ship design- ers, builders and equipment ven- dors seeking greater participation in new commercial markets, over- seas licensers of advanced cruise ferry technology, vessel operators and managers, transportation plan- ners and economists, and industry lenders and investment groups.

The report may be ordered by remitting $295 to TransTech Ma- rine Co., 771 Carroll St., Brooklyn,

N.Y. 11215. There is an additional $10 charge for airmail postage for orders outside North America.

An industrial team lead by Litton has successfully demonstrated to the

U.S. Navy for the first time the ap- plication of advanced fiberoptic tech- nology to an all-optical shipboard sonar system. The development was accomplished under the sponsorship of the Naval Research Laboratory and the Naval Underwater Systems

A. David Klein, vice president for advanced programs at Litton's

Guidance & Control Systems Divi- sion, Woodland Hills, Calif., said: "We expect that this technology will provide expanded data handling capacity and more capable sensors in a less complex, lighter weight and less costly system than currently operational sonar arrays towed behind ships. Additionally, this fi- beroptic system would not require any electrical power in the sonar cable and would not be affected by electromagnetic interference from outside sources."

Oceanics, Sylmar, Calif., designed and fabricated the array structure and worked with Litton to integrate the system and conduct system test- ing.

Mr. Klein said that Litton and

Bendix are currently working with the Navy to develop plans to intro- duce lower cost systems with these advances into future operational ships and submarines.

For further information and free literature on Litton,

Directors elected to serve are Alex

The Association, with offices in

Seattle, Wash., represents the ma- jor marine towing and construction companies which operate from the

Maximum space required is 1.5 meters by 0.6 meters by 1.8 meters, with access suitable for personnel to pass through. EES Corporation's popular Omnipure 4MS and 6MS units are now easily disassembled into three pieces for transporting into place, then quickly and easily reassembled for operation.

The Omnipure marine sewage treatment plant oxidizes and disin- fects the organic matter in the sew- age stream through the use of elec- trochemical process.

For further information and free literature on the Omnipure sewage treatment plant,

The carbon steel and ductile iron construction is designed to operate in the most demanding maritime in- dustry applications. The filter in- cludes a patented flow diverter valve which provides virtually zero leak- age and an extremely low-pressure drop. This valve was originally designed for demanding military applications.

For more information and a prod- uct brochure detailing the DIL8 fil- ter from Parker Hannifin,