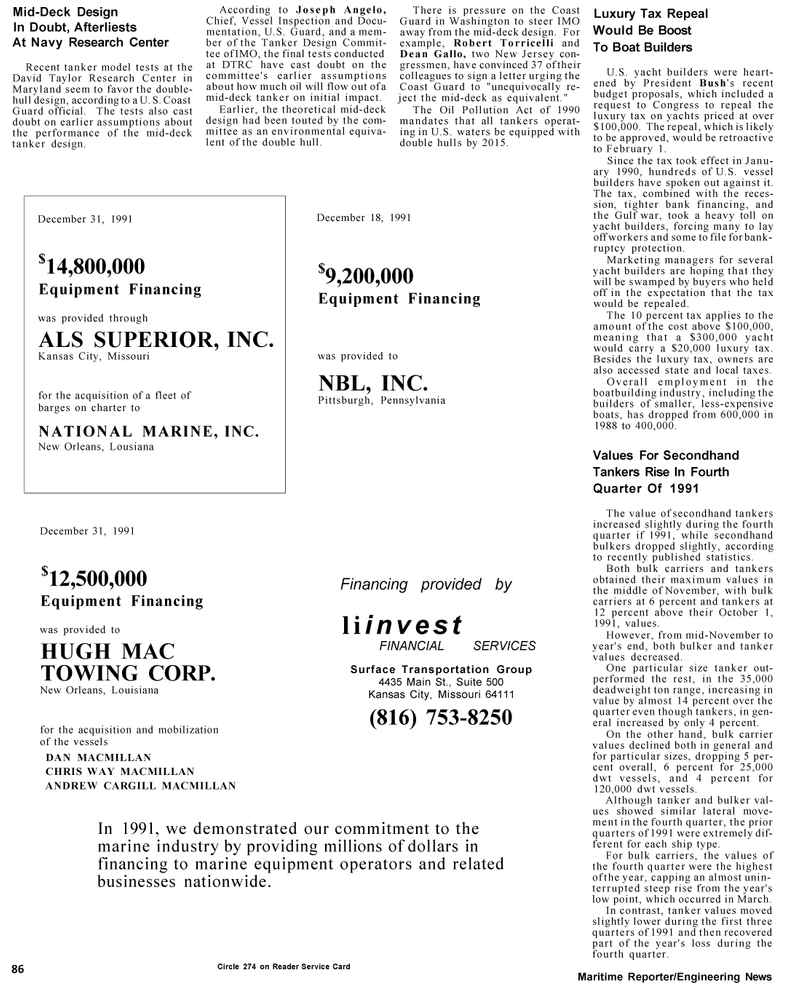 Recent tanker model tests at the

Maryland seem to favor the double- hull design, according to a U. S. Coast

Guard official. The tests also cast doubt on earlier assumptions about the performance of the mid-deck tanker design.

According to Joseph Angelo,

Chief, Vessel Inspection and Docu- mentation, U.S. Guard, and a mem- ber of the Tanker Design Commit- tee of IMO, the final tests conducted at DTRC have cast doubt on the committee's earlier assumptions about how much oil will flow out of a mid-deck tanker on initial impact.

Earlier, the theoretical mid-deck design had been touted by the com- mittee as an environmental equiva- lent of the double hull.

There is pressure on the Coast

Guard in Washington to steer IMO away from the mid-deck design. For example, Robert Torricelli and

Dean Gallo, two New Jersey con- gressmen, have convinced 37 of their colleagues to sign a letter urging the

Coast Guard to "unequivocally re- ject the mid-deck as equivalent."

The Oil Pollution Act of 1990 mandates that all tankers operat- ing in U.S. waters be equipped with double hulls by 2015.

Equipment Financing was provided through

Kansas City, Missouri for the acquisition of a fleet of barges on charter to

Equipment Financing was provided to

Equipment Financing was provided to

New Orleans, Louisiana for the acquisition and mobilization of the vessels

In 1991, we demonstrated our commitment to the marine industry by providing millions of dollars in financing to marine equipment operators and related businesses nationwide.

U.S. yacht builders were heart- ened by President Bush's recent budget proposals, which included a request to Congress to repeal the luxury tax on yachts priced at over $100,000. The repeal, which is likely to be approved, would be retroactive to February 1.

Since the tax took effect in Janu- ary 1990, hundreds of U.S. vessel builders have spoken out against it.

The tax, combined with the reces- sion, tighter bank financing, and the Gulf war, took a heavy toll on yacht builders, forcing many to lay off workers and some to file for bank- ruptcy protection.

Marketing managers for several yacht builders are hoping that they will be swamped by buyers who held off in the expectation that the tax would be repealed.

Besides the luxury tax, owners are also accessed state and local taxes.

Overall employment in the boatbuilding industry, including the builders of smaller, less-expensive boats, has dropped from 600,000 in 1988 to 400,000.

The value of secondhand tankers increased slightly during the fourth quarter if 1991, while secondhand bulkers dropped slightly, according to recently published statistics.

However, from mid-November to year's end, both bulker and tanker values decreased.

One particular size tanker out- performed the rest, in the 35,000 deadweight ton range, increasing in value by almost 14 percent over the quarter even though tankers, in gen- eral increased by only 4 percent.

Although tanker and bulker val- ues showed similar lateral move- ment in the fourth quarter, the prior quarters of 1991 were extremely dif- ferent for each ship type.

For bulk carriers, the values of the fourth quarter were the highest of the year, capping an almost unin- terrupted steep rise from the year's low point, which occurred in March.

In contrast, tanker values moved slightly lower during the first three quarters of 1991 and then recovered part of the year's loss during the fourth quarter.