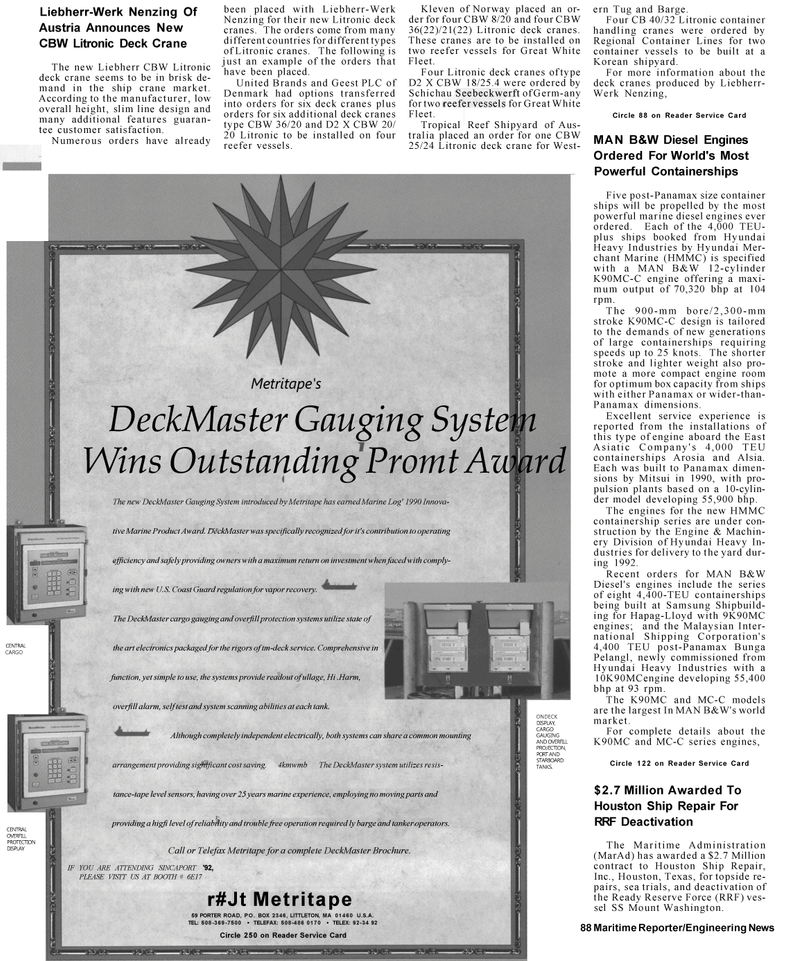 Call or Telefax Metritape for a complete DeckMaster Brochure.

IF YOU ARE ATTENDING SINCAPORT '92,

The DeckMaster cargo gauging and overfill protection systems utilize state of the art electronics packaged for the rigors of tm-deck service. Comprehensive in function, yet simple to use, the systems provide readout of ullage, Hi .Harm, overfill alarm, self test and system scanning abilities at each tank.

For more information about the deck cranes produced by Liebherr-

Ordered For World's Most

Five post-Panamax size container ships will be propelled by the most powerful marine diesel engines ever ordered. Each of the 4,000 TEU- plus ships booked from Hyundai

The 900-mm bore/2,300-mm stroke K90MC-C design is tailored to the demands of new generations of large containerships requiring speeds up to 25 knots. The shorter stroke and lighter weight also pro- mote a more compact engine room for optimum box capacity from ships with either Panamax or wider-than-

The engines for the new HMMC containership series are under con- struction by the Engine & Machin- ery Division of Hyundai Heavy In- dustries for delivery to the yard dur- ing 1992.

Diesel's engines include the series of eight 4,400-TEU containerships being built at Samsung Shipbuild- ing for Hapag-Lloyd with 9K90MC engines; and the Malaysian Inter- national Shipping Corporation's 4,400 TEU post-Panamax Bunga

The K90MC and MC-C models are the largest In MAN B&W's world market.

For complete details about the

The Maritime Administration (MarAd) has awarded a $2.7 Million contract to Houston Ship Repair,

The new Liebherr CBW Litronic deck crane seems to be in brisk de- mand in the ship crane market.

Numerous orders have already been placed with Liebherr-Werk

Nenzing for their new Litronic deck cranes. The orders come from many different countries for different types of Litronic cranes. The following is just an example of the orders that have been placed.

United Brands and Geest PLC of