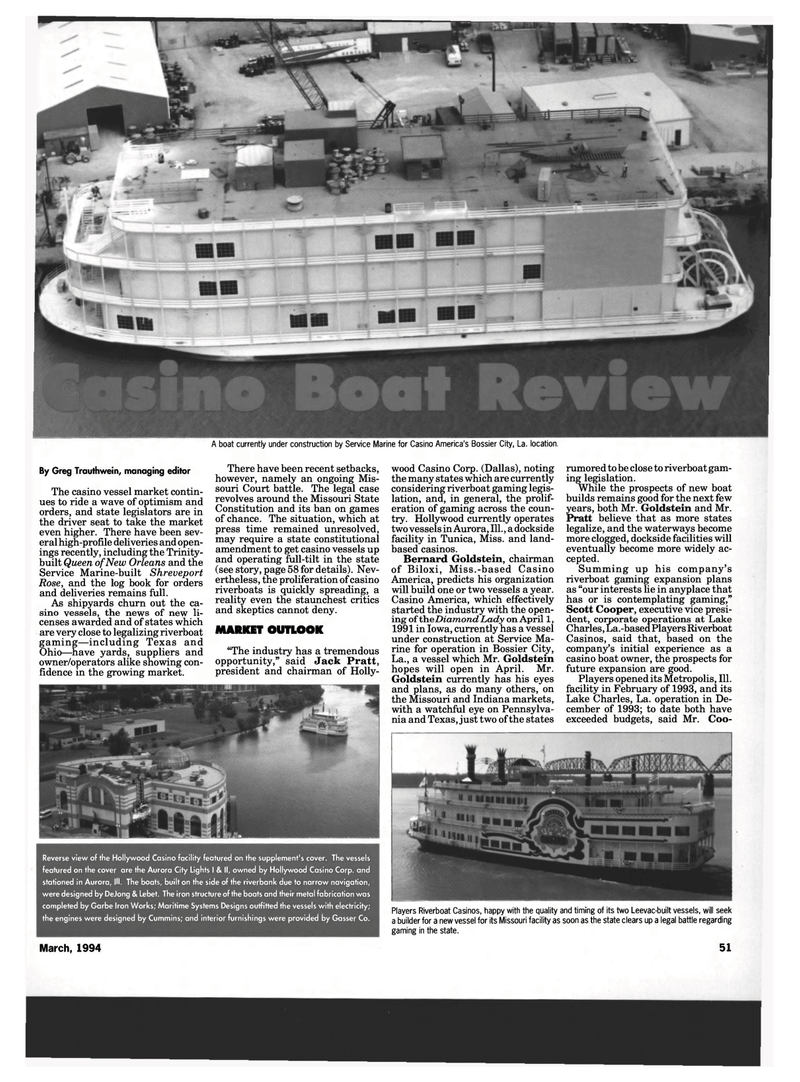 The casino vessel market contin- ues to ride a wave of optimism and orders, and state legislators are in the driver seat to take the market even higher. There have been sev- eral high-profile deliveries and open- ings recently, including the Trinity- built Queen of New Orleans and the

Rose, and the log book for orders and deliveries remains full.

As shipyards churn out the ca- sino vessels, the news of new li- censes awarded and of states which are very close to legalizing riverboat gaming—including Texas and

There have been recent setbacks, however, namely an ongoing Mis- souri Court battle. The legal case revolves around the Missouri State

Constitution and its ban on games of chance. The situation, which at press time remained unresolved, may require a state constitutional amendment to get casino vessels up and operating full-tilt in the state (see story, page 58 for details). Nev- ertheless, the proliferation of casino riverboats is quickly spreading, a reality even the staunchest critics and skeptics cannot deny.

MARKET OUTLOOK "The industry has a tremendous opportunity," said Jack Pratt, president and chairman of Holly- wood Casino Corp. (Dallas), noting the many states which are currently considering riverboat gaming legis- lation, and, in general, the prolif- eration of gaming across the coun- try. Hollywood currently operates two vessels in Aurora, 111., adockside facility in Tunica, Miss, and land- based casinos.

America, predicts his organization will build one or two vessels a year.

Casino America, which effectively started the industry with the open- ing of theDiamond Lady on April 1, 1991 in Iowa, currently has a vessel under construction at Service Ma- rine for operation in Bossier City,

La., a vessel which Mr. Goldstein hopes will open in April. Mr.

Goldstein currently has his eyes and plans, as do many others, on the Missouri and Indiana markets, with a watchful eye on Pennsylva- nia and Texas, just two of the states rumored to be close to riverboat gam- ing legislation.

While the prospects of new boat builds remains good for the next few years, both Mr. Goldstein and Mr.

Summing up his company's riverboat gaming expansion plans as "our interests lie in anyplace that has or is contemplating gaming,"

Casinos, said that, based on the company's initial experience as a casino boat owner, the prospects for future expansion are good.

Players opened its Metropolis, 111. facility in February of 1993, and its

Players Riverboat Casinos, happy with the quality and timing of its two Leevac-built vessels, will seek a builder for a new vessel for its Missouri facility as soon as the state clears up a legal battle regarding gaming in the state.

Reverse view of the Hollywood Casino facility featured on the supplement's cover. The vessels featured on the cover are the Aurora City Lights I & II, owned by Hollywood Casino Corp. and stationed in Aurora, III. The boats, built on the side of the riverbank due to narrow navigation, were designed by DeJong & Lebet. The iron structure of the boats and their metal fabrication was completed by Garbe Iron Works; Maritime Systems Designs outfitted the vessels with electricity; the engines were designed by Cummins; and interior furnishings were provided by Gasser Co.