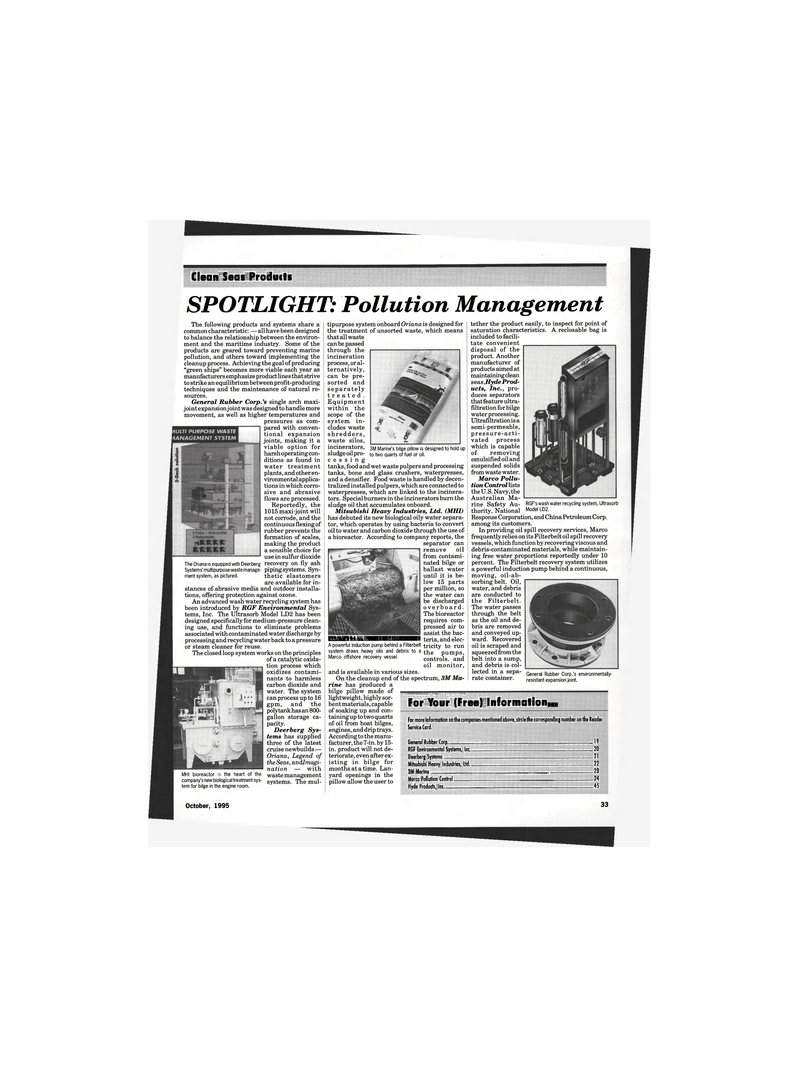 SPOTLIGHT: Pollution Management 3M Marine's bilge pillow is designed to hold up to two quarts of fuel or oil. tipurpose system onboard Oriana is designed for the treatment of unsorted waste, which means that all waste can be passed through the incineration process, or al- ternatively, can be pre- sorted and separately treated.

Equipment within the scope of the system in- cludes waste shredders, waste silos, incinerators, sludge oil pro- cess i n g tanks, food and wet waste pulpers and processing tanks, bone and glass crushers, waterpresses, and a densifier. Food waste is handled by decen- tralized installed pulpers, which are connected to waterpresses, which are linked to the incinera- tors. Special burners in the incinerators burn the sludge oil that accumulates onboard.

Mitsubishi Heavy Industries, Ltd. (MHI) has debuted its new biological oily water separa- tor, which operates by using bacteria to convert oil to water and carbon dioxide through the use of a bioreactor. According to company reports, the separator can remove oil from contami- nated bilge or ballast water until it is be- low 15 parts per million, so the water can be discharged overboard.

A powerful induction pump behind a Filterbelt tricity to run system draws heavy oils and debris to a ^e pumps,

On the cleanup end of the spectrum, 3M Ma- rine has produced a bilge pillow made of fti^^^jjiiMgfaM. lightweight, highly sor- bent materials, capable of soaking up and con- taining up to two quarts of oil from boat bilges, engines, and drip trays.

According to the manu- facturer, the 7-in. by 15- in. product will not de- teriorate, even after ex- isting in bilge for months at a time. Lan- yard openings in the pillow allow the user to tether the product easily, to inspect for point of saturation characteristics. A reclosable bag is included to facili- tate convenient disposal of the product. Another manufacturer of products aimed at maintaining clean seas,Hyde Prod- ucts, Inc., pro- duces separators that feature ultra- filtration for bilge water processing.

Ultrafiltrationis a semi-permeable, pressure-acti- vated process which is capable of removing emulsified oil and suspended solids from waste water.

Response Corporation, and China Petroleum Corp. among its customers.

The water passes through the belt as the oil and de- bris are removed and conveyed up- ward. Recovered oil is scraped and squeezed from the belt into a sump, and debris is col- lected in a sepa- rate container. General Rubber Corp.'s environmentally-resistant expansion joint.

For Your (Free) Information •••

For more information on the companies mentioned above, circle the corresponding number on the Reader

The following products and systems share a common characteristic: — all have been designed to balance the relationship between the environ- ment and the maritime industry. Some of the products are geared toward preventing marine pollution, and others toward implementing the cleanup process. Achieving the goal of producing "green ships" becomes more viable each year as manufacturers emphasize product lines that strive to strike an equilibrium between profit-producing techniques and the maintenance of natural re- sources.

Reportedly, the 1015 maxi-joint will not corrode, and the continuous flexing of rubber prevents the formation of scales, making the product a sensible choice for use in sulfur dioxide recovery on fly ash pipingsystems. Syn- thetic elastomers are available for in- stances of abrasive media and outdoor installa- tions, offering protection against ozone.

An advanced wash water recycling system has been introduced by RGF Environmental Sys- tems, Inc. The Ultrasorb Model LD2 has been designed specifically for medium-pressure clean- ing use, and functions to eliminate problems associated with contaminated water discharge by processing and recycling water back to a pressure or steam cleaner for reuse.

The closed loop system works on the principles of a catalytic oxida- tion process which oxidizes contami- nants to harmless carbon dioxide and water. The system can process up to 16 gpm, and the polytankhas an 800- gallon storage ca- pacity.

Oriana, Legend of the Seas, an imagi- nation — with of the waste management company's new biological treatment sys- systems. The mul- tem for bilge in the engine room.

The Oriana is equipped with Deerberg