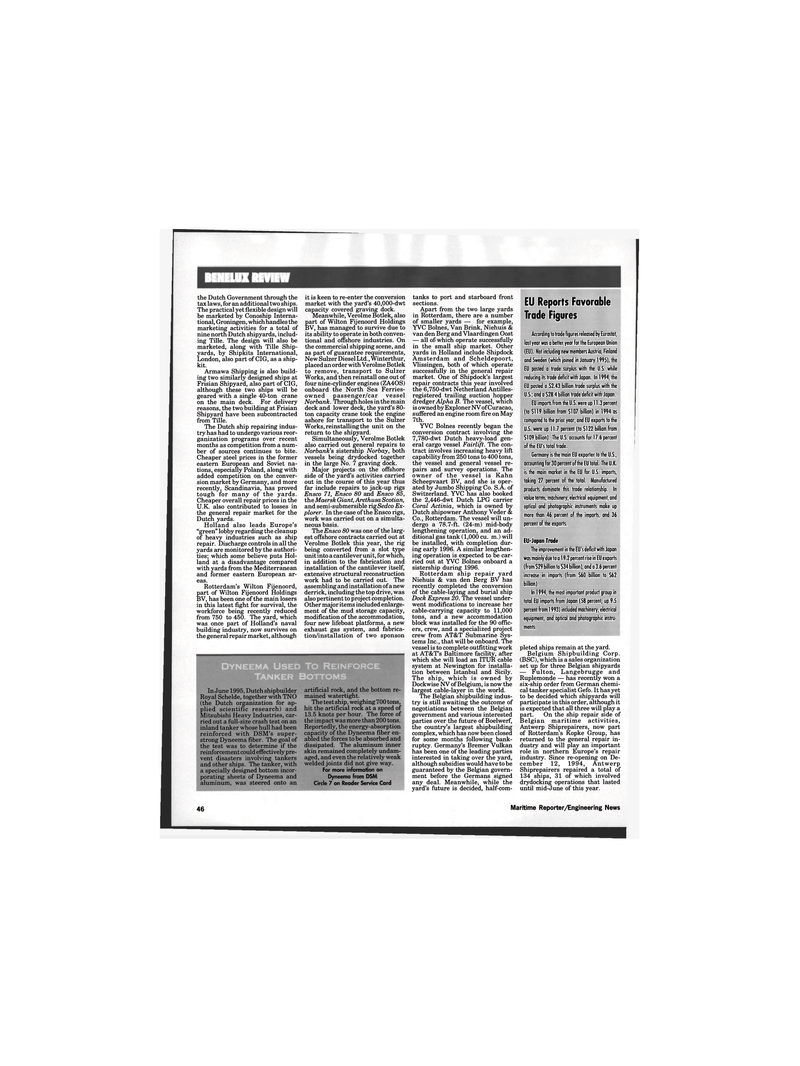 BENELUX REVIEW the Dutch Government through the tax laws, for an additional two ships.

The practical yet flexible design will be marketed by Conoship Interna- tional, Groningen, which handles the marketing activities for a total of nine north Dutch shipyards, includ- ing Tille. The design will also be marketed, along with Tille Ship- yards, by Shipkits International,

London, also part of CIG, as a ship- kit.

Frisian Shipyard, also part of CIG, although these two ships will be geared with a single 40-ton crane on the main deck. For delivery reasons, the two building at Frisian

Shipyard have been subcontracted from Tille.

The Dutch ship repairing indus- try has had to undergo various reor- ganization programs over recent months as competition from a num- ber of sources continues to bite.

Cheaper steel prices in the former eastern European and Soviet na- tions, especially Poland, along with added competition on the conver- sion market by Germany, and more recently, Scandinavia, has proved tough for many of the yards.

Cheaper overall repair prices in the

U.K. also contributed to losses in the general repair market for the

Holland also leads Europe's "green" lobby regarding the cleanup of heavy industries such as ship repair. Discharge controls in all the yards are monitored by the authori- ties; which some believe puts Hol- land at a disadvantage compared with yards from the Mediterranean and former eastern European ar- eas.

BV, has been one of the main losers in this latest fight for survival, the workforce being recently reduced from 750 to 450. The yard, which was once part of Holland's naval building industry, now survives on the general repair market, although it is keen to re-enter the conversion market with the yard's 40,000-dwt capacity covered graving dock.

BV, has managed to survive due to its ability to operate in both conven- tional and offshore industries. On the commercial shipping scene, and as part of guarantee requirements,

Works, and then reinstall one out of four nine-cylinder engines (ZA40S) onboard the North Sea Ferries- owned passenger/car vessel

Norbank. Through holes in the main deck and lower deck, the yard's 80- ton capacity crane took the engine ashore for transport to the Sulzer

Works, reinstalling the unit on the return to the shipyard.

Norbank's sistership Norbay, both vessels being drydocked together in the large No. 7 graving dock.

Ensco 71, Ensco 80 and Ensco 85, the Maersk Giant, Arethusa Scotian, and semi-submersible rig Sedco Ex- plorer. In the case of the Ensco rigs, work was carried out on a simulta- neous basis.

Verolme Botlek this year, the rig being converted from a slot type unit into a cantilever unit, for which, in addition to the fabrication and installation of the cantilever itself, extensive structural reconstruction work had to be carried out. The assembling and installation of a new derrick, including the top drive, was also pertinent to project completion.

Apart from the two large yards in Rotterdam, there are a number of smaller yards — for example,

YVC Bolnes, Van Brink, Niehuis & van den Berg and Vlaardingen Oost — all of which operate successfully in the small ship market. Other yards in Holland include Shipdock

Vlissingen, both of which operate successfully in the general repair market. One of Shipdock's largest repair contracts this year involved the 6,750-dwt Netherland Antilles- registered trailing suction hopper dredger Alpha B. The vessel, which is owned by Exploner NV of Curacao, suffered an engine room fire on May 7th.

Scheepvaart BV, and she is oper- ated by Jumbo Shipping Co. S.A. of

Coral Actinia, which is owned by

Co., Rotterdam. The vessel will un- dergo a 78.7-ft. (24-m) mid-body lengthening operation, and an ad- ditional gas tank (1,000 cu. m.)will be installed, with completion dur- ing early 1996. A similar lengthen- ing operation is expected to be car- ried out at YVC Bolnes onboard a sistership during 1996.

Dock Express 20. The vessel under- went modifications to increase her cable-carrying capacity to 11,000 tons, and a new accommodation block was installed for the 90 offic- ers, crew, and a specialized project crew from AT&T Submarine Sys- tems Inc., that will be onboard. The vessel is to complete outfitting work at AT&T's Baltimore facility, after which she will load an ITUR cable system at Newington for installa- tion between Istanbul and Sicily.

The ship, which is owned by

Dockwise NV of Belgium, is now the largest cable-layer in the world.

The Belgian shipbuilding indus- try is still awaiting the outcome of negotiations between the Belgian government and various interested parties over the future of Boelwerf, the country's largest shipbuilding complex, which has now been closed for some months following bank- ruptcy. Germany's Bremer Vulkan has been one of the leading parties interested in taking over the yard, although subsidies would have to be guaranteed by the Belgian govern- ment before the Germans signed any deal. Meanwhile, while the yard's future is decided, half-com-

According to trade figures released by Eurostat, last year was a better year for the European Union (EU). Not including new members Austria, Finland and Sweden (which joined in January 1995), the

EU posted a trade surplus with the U.S. while reducing its trade deficit with Japan. In 1994, the

EU posted a S2.43 billion trade surplus with the

In 1994, the most important product group in total EU imports from Japan (58 percent, up 9.5 percent from 1993) included machinery, electrical equipment, and optical and photographic instru- ments. pleted ships remain at the yard.

Belgium Shipbuilding Corp. (BSC), which is a sales organization set up for three Belgian shipyards — Fulton, Langebrugge and

Ruplemonde — has recently won a six-ship order from German chemi- cal tanker specialist Gefo. It has yet to be decided which shipyards will participate in this order, although it is expected that all three will play a part. On the ship repair side of

Antwerp Shiprepairers, now part of Rotterdam's Kopke Group, has returned to the general repair in- dustry and will play an important role in northern Europe's repair industry. Since re-opening on De- cember 12, 1994, Antwerp

Shiprepairers repaired a total of 134 ships, 31 of which involved drydocking operations that lasted until mid-June of this year.

Royal Schelde, together with TNO (the Dutch organization for ap- plied scientific research) and

Mitsubishi Heavy Industries, car- ried out a full-size crash test on an inland tanker whose hull had been reinforced with DSM's super- strong Dyneema fiber. The goal of the test was to determine if the reinforcement could effectively pre- vent disasters involving tankers and other ships. The tanker, with a specially designed bottom incor- porating sheets of Dyneema and aluminum, was steered onto an artificial rock, and the bottom re- mained watertight.

The test ship, weighing 700 tons, hit the artificial rock at a speed of 13.5 knots per hour. The force of the impact was more than 200 tons.

Reportedly, the energy-absorption capacity of the Dyneema fiber en- abled the forces to be absorbed and dissipated. The aluminum inner skin remained completely undam- aged, and even the relatively weak welded joints did not give way.

For more information on