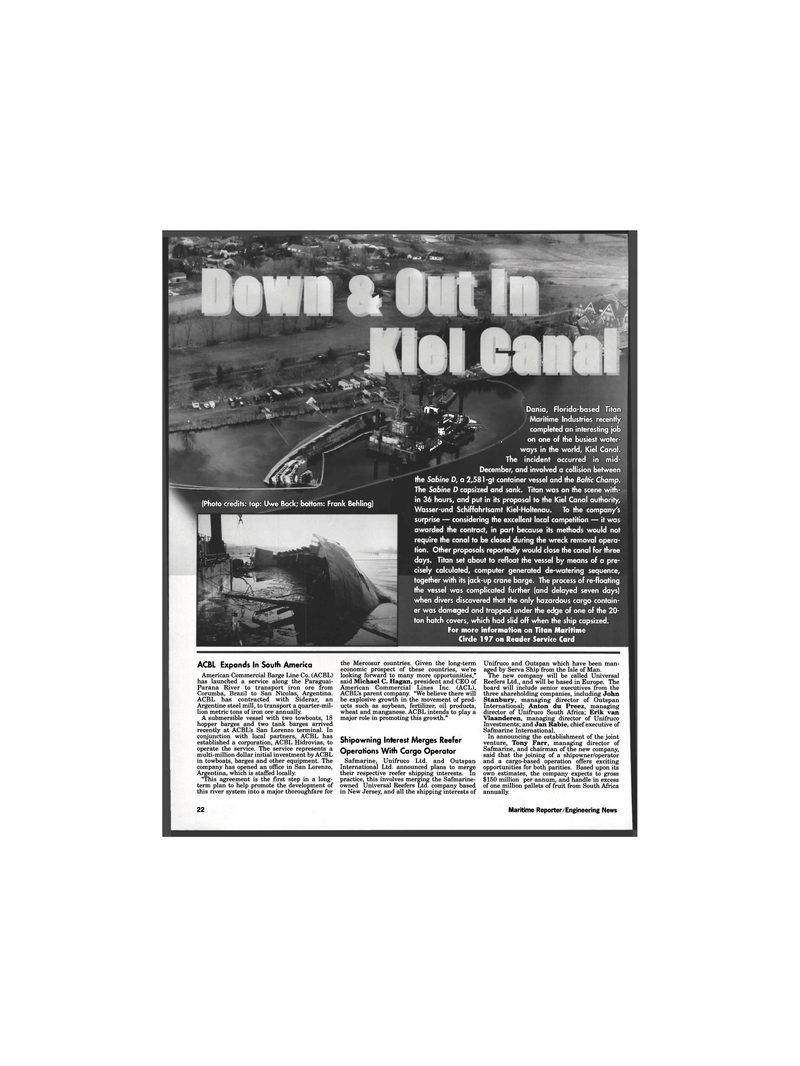 The incident occurred in mid-

December, and involved a collision between the Sabine D, a 2,581-gt container vessel and the Baltic Champ.

The Sabine D capsized and sank. Titan was on the scene with- in 36 hours, and put in its proposal to the Kiel Canal authority,

Wasser-und Schiffahrtsamt Kiel-Holtenau. To the company's surprise — considering the excellent local competition — it was awarded the contract, in part because its methods would not require the canal to be closed during the wreck removal opera- tion. Other proposals reportedly would close the canal for three days. Titan set about to refloat the vessel by means of a pre- cisely calculated, computer generated de-watering sequence, together with its jack-up crane barge. The process of re-floating the vessel was complicated further (and delayed seven days) when divers discovered that the only hazardous cargo contain- er was damaged and trapped under the edge of one of the 20- ton hatch covers, which had slid off when the ship capsized.

For more information on Titan Maritime

American Commercial Barge Line Co. (ACBL) has launched a service along the Paraguai-

ACBL has contracted with Siderar, an

A submersible vessel with two towboats, 18 hopper barges and two tank barges arrived recently at ACBL's San Lorenzo terminal. In conjunction with local partners, ACBL has established a corporation, ACBL Hidrovias, to operate the service. The service represents a multi-million dollar initial investment by ACBL in towboats, barges and other equipment. The company has opened an office in San Lorenzo,

Argentina, which is staffed locally. "This agreement is the first step in a long- term plan to help promote the development of this river system into a major thoroughfare for the Mercosur countries. Given the long-term economic prospect of these countries, we're looking forward to many more opportunities," said Michael C. Hagan, president and CEO of

ACBL's parent company. "We believe there will be explosive growth in the movement of prod- ucts such as soybean, fertilizer, oil products, wheat and manganese. ACBL intends to play a major role in promoting this growth."

International Ltd. announced plans to merge their respective reefer shipping interests. In practice, this involves merging the Safmarine- owned Universal Reefers Ltd. company based in New Jersey, and all the shipping interests of

Unifruco and Outspan which have been man- aged by Serva Ship from the Isle of Man.

The new company will be called Universal

Reefers Ltd., and will be based in Europe. The board will include senior executives from the three shareholding companies, including John

In announcing the establishment of the joint venture, Tony Farr, managing director of

Safmarine, and chairman of the new company, said that the joining of a shipowner/operator and a cargo-based operation offers exciting opportunities for both parities. Based upon its own estimates, the company expects to gross $150 million per annum, and handle in excess of one million pallets of fruit from South Africa annually. 22 Maritime Reporter & Engineering News