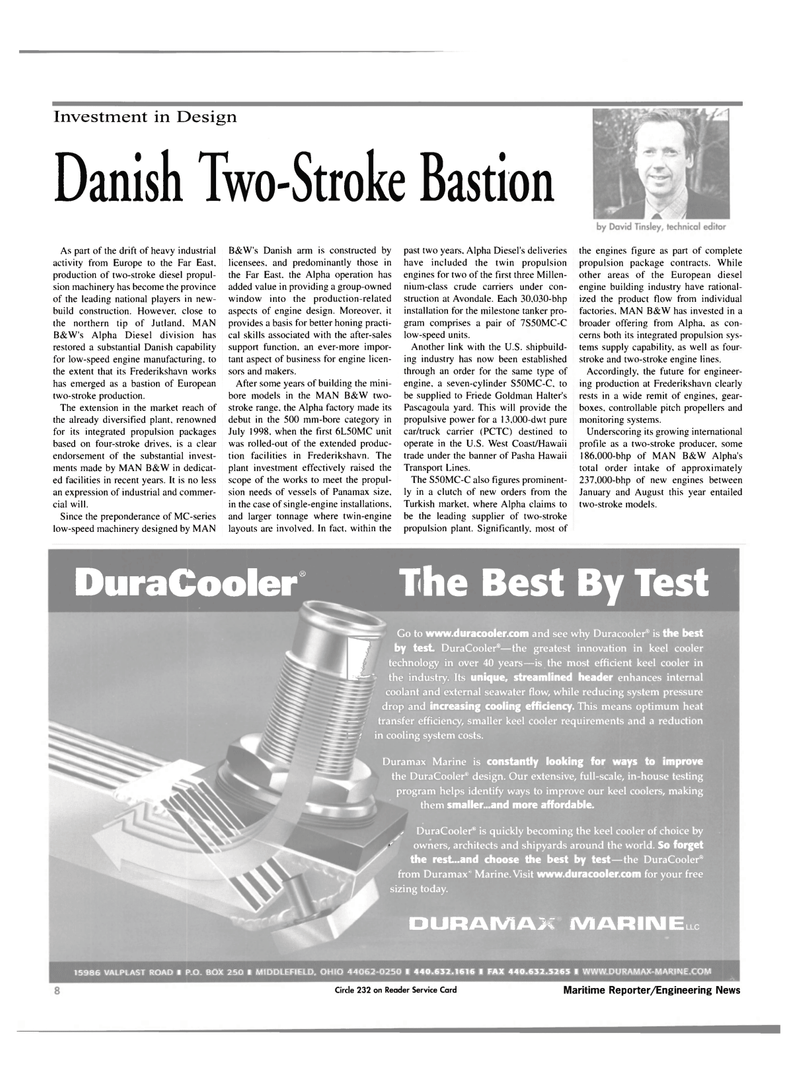 As part of the drift of heavy industrial activity from Europe to the Far East, production of two-stroke diesel propul- sion machinery has become the province of the leading national players in new- build construction. However, close to the northern tip of Jutland, MAN

B&W's Alpha Diesel division has restored a substantial Danish capability for low-speed engine manufacturing, to the extent that its Frederikshavn works has emerged as a bastion of European two-stroke production.

The extension in the market reach of the already diversified plant, renowned for its integrated propulsion packages based on four-stroke drives, is a clear endorsement of the substantial invest- ments made by MAN B&W in dedicat- ed facilities in recent years. It is no less an expression of industrial and commer- cial will.

B&W's Danish arm is constructed by licensees, and predominantly those in the Far East, the Alpha operation has added value in providing a group-owned window into the production-related aspects of engine design. Moreover, it provides a basis for better honing practi- cal skills associated with the after-sales support function, an ever-more impor- tant aspect of business for engine licen- sors and makers.

After some years of building the mini- bore models in the MAN B&W two- stroke range, the Alpha factory made its debut in the 500 mm-bore category in

July 1998. when the first 6L50MC unit was rolled-out of the extended produc- tion facilities in Frederikshavn. The plant investment effectively raised the scope of the works to meet the propul- sion needs of vessels of Panamax size, in the case of single-engine installations, and larger tonnage where twin-engine layouts are involved. In fact, within the past two years. Alpha Diesel's deliveries have included the twin propulsion engines for two of the first three Millen- nium-class crude carriers under con- struction at Avondale. Each 30.030-bhp installation for the milestone tanker pro- gram comprises a pair of 7S50MC-C low-speed units.

Another link with the U.S. shipbuild- ing industry has now been established through an order for the same type of engine, a seven-cylinder S50MC-C, to be supplied to Friede Goldman Halter's

Pascagoula yard. This will provide the propulsive power for a 13,000-dwt pure car/truck carrier (PCTC) destined to operate in the U.S. West Coast/Hawaii trade under the banner of Pasha Hawaii

Turkish market, where Alpha claims to be the leading supplier of two-stroke propulsion plant. Significantly, most of the engines figure as part of complete propulsion package contracts. While other areas of the European diesel engine building industry have rational- ized the product flow from individual factories, MAN B&W has invested in a broader offering from Alpha, as con- cerns both its integrated propulsion sys- tems supply capability, as well as four- stroke and two-stroke engine lines.

Underscoring its growing international profile as a two-stroke producer, some 186,000-bhp of MAN B&W Alpha's total order intake of approximately 237.000-bhp of new engines between

DuraCooler The Best By Test

Go to www.duracooler.com and see why Duracooler® is the best E by test. DuraCooler®—the greatest innovation in keel cooler technology in over 40 years—is the most efficient keel cooler in the industry. Its unique, streamlined header enhances internal coolant and external seawater flow, while reducing system pressure drop and increasing cooling efficiency. This means optimum heat — transfer efficiency, smaller keel cooler requirements and a reduction rr in cooling system costs.

Duramax Marine is constantly looking for ways to improve the DuraCooler® design. Our extensive, full-scale, in-house testing program helps identify ways to improve our keel coolers, making them smaller...and more affordable. x DuraCooler® is quickly becoming the keel cooler of choice by ' owners, architects and shipyards around the world. So forget the rest..and choose the best by test—the DuraCooler® from Duramax" Marine. Visit www.duracooler.com for your free sizing today.