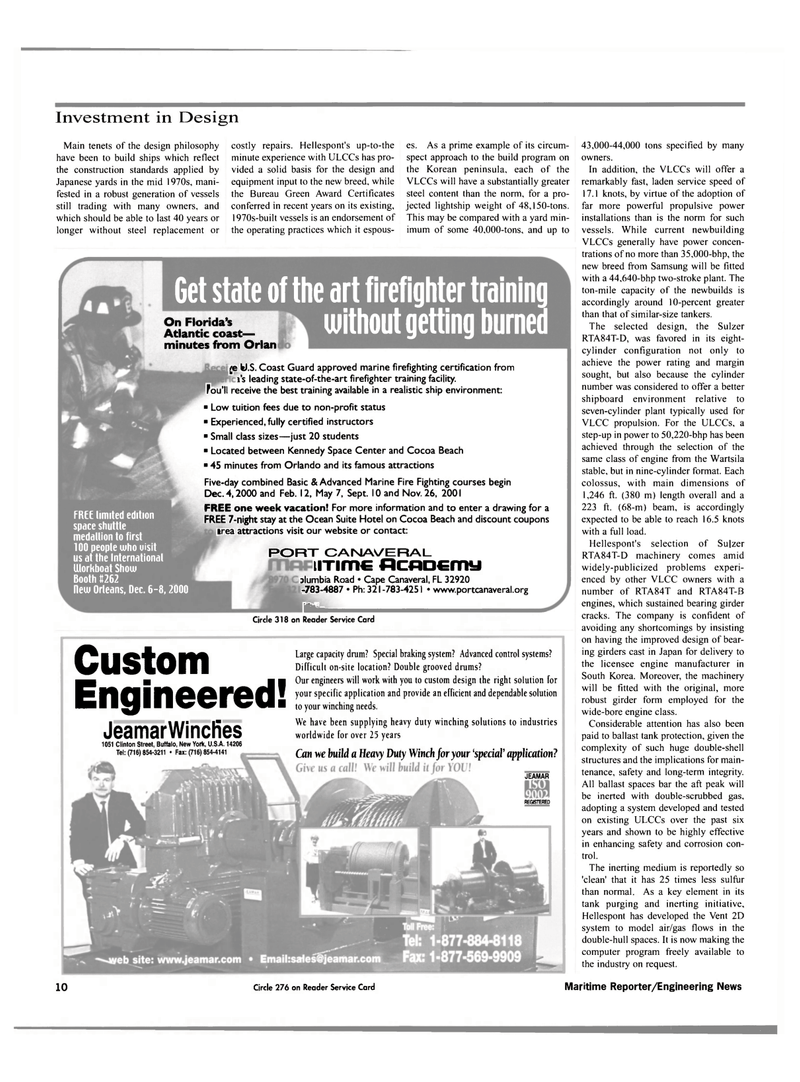 Japanese yards in the mid 1970s, mani- fested in a robust generation of vessels still trading with many owners, and which should be able to last 40 years or longer without steel replacement or costly repairs. Hellespont's up-to-the minute experience with ULCCs has pro- vided a solid basis for the design and equipment input to the new breed, while the Bureau Green Award Certificates conferred in recent years on its existing, 1970s-built vessels is an endorsement of the operating practices which it espous- es. As a prime example of its circum- spect approach to the build program on the Korean peninsula, each of the

VLCCs will have a substantially greater steel content than the norm, for a pro- jected lightship weight of 48,150-tons.

In addition, the VLCCs will offer a remarkably fast, laden service speed of 17.1 knots, by virtue of the adoption of far more powerful propulsive power installations than is the norm for such vessels. While current newbuilding

VLCCs generally have power concen- trations of no more than 35,000-bhp, the new breed from Samsung will be fitted with a 44,640-bhp two-stroke plant. The ton-mile capacity of the newbuilds is accordingly around 10-percent greater than that of similar-size tankers.

The selected design, the Sulzer

RTA84T-D, was favored in its eight- cylinder configuration not only to achieve the power rating and margin sought, but also because the cylinder number was considered to offer a better shipboard environment relative to seven-cylinder plant typically used for

VLCC propulsion. For the ULCCs, a step-up in power to 50,220-bhp has been achieved through the selection of the same class of engine from the Wartsila stable, but in nine-cylinder format. Each colossus, with main dimensions of 1,246 ft. (380 m) length overall and a 223 ft. (68-m) beam, is accordingly expected to be able to reach 16.5 knots with a full load.

RTA84T-D machinery comes amid widely-publicized problems experi- enced by other VLCC owners with a number of RTA84T and RTA84T-B engines, which sustained bearing girder cracks. The company is confident of avoiding any shortcomings by insisting on having the improved design of bear- ing girders cast in Japan for delivery to the licensee engine manufacturer in

South Korea. Moreover, the machinery will be fitted with the original, more robust girder form employed for the wide-bore engine class.

Considerable attention has also been paid to ballast tank protection, given the complexity of such huge double-shell structures and the implications for main- tenance, safety and long-term integrity.

All ballast spaces bar the aft peak will be inerted with double-scrubbed gas, adopting a system developed and tested on existing ULCCs over the past six years and shown to be highly effective in enhancing safety and corrosion con- trol.

The inerting medium is reportedly so 'clean' that it has 25 times less sulfur than normal. As a key element in its tank purging and inerting initiative,

Hellespont has developed the Vent 2D system to model air/gas flows in the double-hull spaces. It is now making the computer program freely available to the industry on request.

FREE one week vacation! For more information and to enter a drawing for a

Our engineers will work with you to custom design the right solution for your specific application and provide an efficient and dependable solution to your winching needs.

Can we build a Heavy Duty Winch for your 'special' application? 10 Circle 276 on Reader Service Card Maritime Reporter/Engineering News