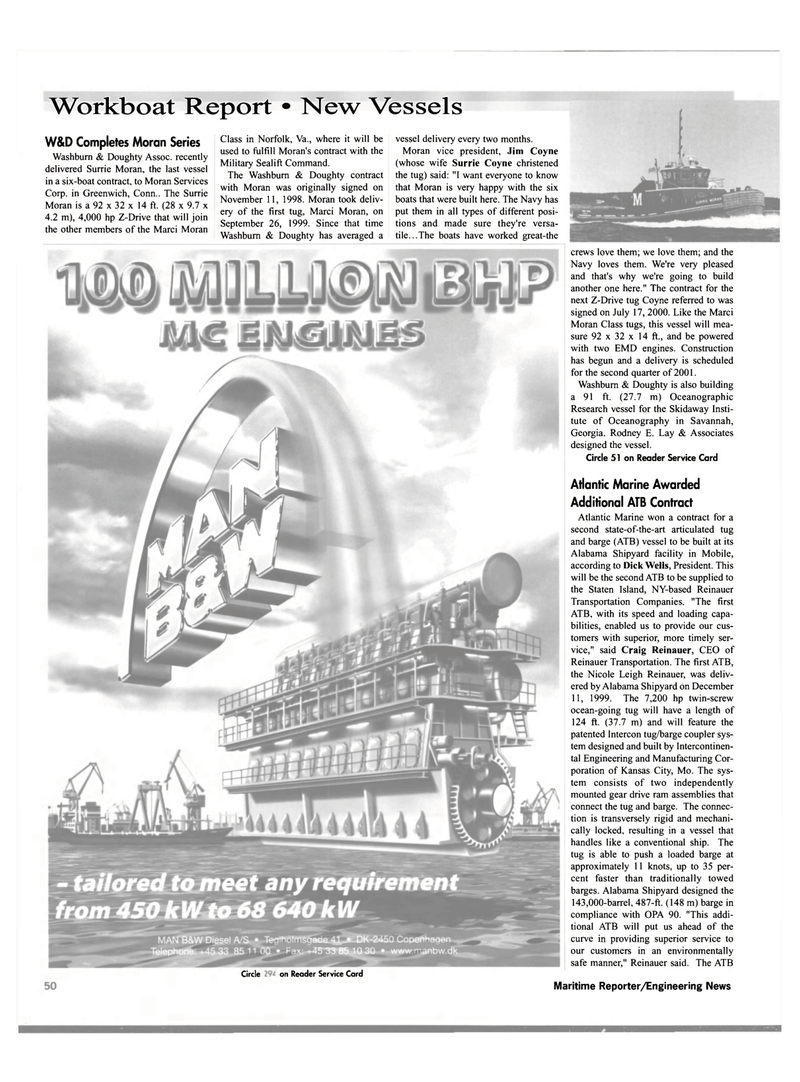 Corp. in Greenwich, Conn.. The Surrie

Class in Norfolk, Va., where it will be used to fulfill Moran's contract with the

The Washburn & Doughty contract with Moran was originally signed on

Washburn & Doughty has averaged a vessel delivery every two months.

Moran vice president, Jim Coyne (whose wife Surrie Coyne christened the tug) said: "I want everyone to know that Moran is very happy with the six boats that were built here. The Navy has put them in all types of different posi- tions and made sure they're versa- tile... The boats have worked great-the

Circle 337 on Reader Service Card 54 crews love them; we love them; and the

Navy loves them. We're very pleased and that's why we're going to build another one here." The contract for the next Z-Drive tug Coyne referred to was signed on July 17, 2000. Like the Marci

Moran Class tugs, this vessel will mea- sure 92 x 32 x 14 ft., and be powered with two EMD engines. Construction has begun and a delivery is scheduled for the second quarter of 2001.

Research vessel for the Skidaway Insti- tute of Oceanography in Savannah,

Alabama Shipyard facility in Mobile, according to Dick Wells, President. This will be the second ATB to be supplied to the Staten Island, NY-based Reinauer

ATB, with its speed and loading capa- bilities, enabled us to provide our cus- tomers with superior, more timely ser- vice," said Craig Reinauer, CEO of

Reinauer Transportation. The first ATB, the Nicole Leigh Reinauer, was deliv- ered by Alabama Shipyard on December 11, 1999. The 7,200 hp twin-screw ocean-going tug will have a length of 124 ft. (37.7 m) and will feature the patented Intercon tug/barge coupler sys- tem designed and built by Intercontinen- tal Engineering and Manufacturing Cor- poration of Kansas City, Mo. The sys- tem consists of two independently mounted gear drive ram assemblies that connect the tug and barge. The connec- tion is transversely rigid and mechani- cally locked, resulting in a vessel that handles like a conventional ship. The tug is able to push a loaded barge at approximately 11 knots, up to 35 per- cent faster than traditionally towed barges. Alabama Shipyard designed the 143,000-barrel, 487-ft. (148 m) barge in compliance with OPA 90. "This addi- tional ATB will put us ahead of the curve in providing superior service to our customers in an environmentally safe manner," Reinauer said. The ATB