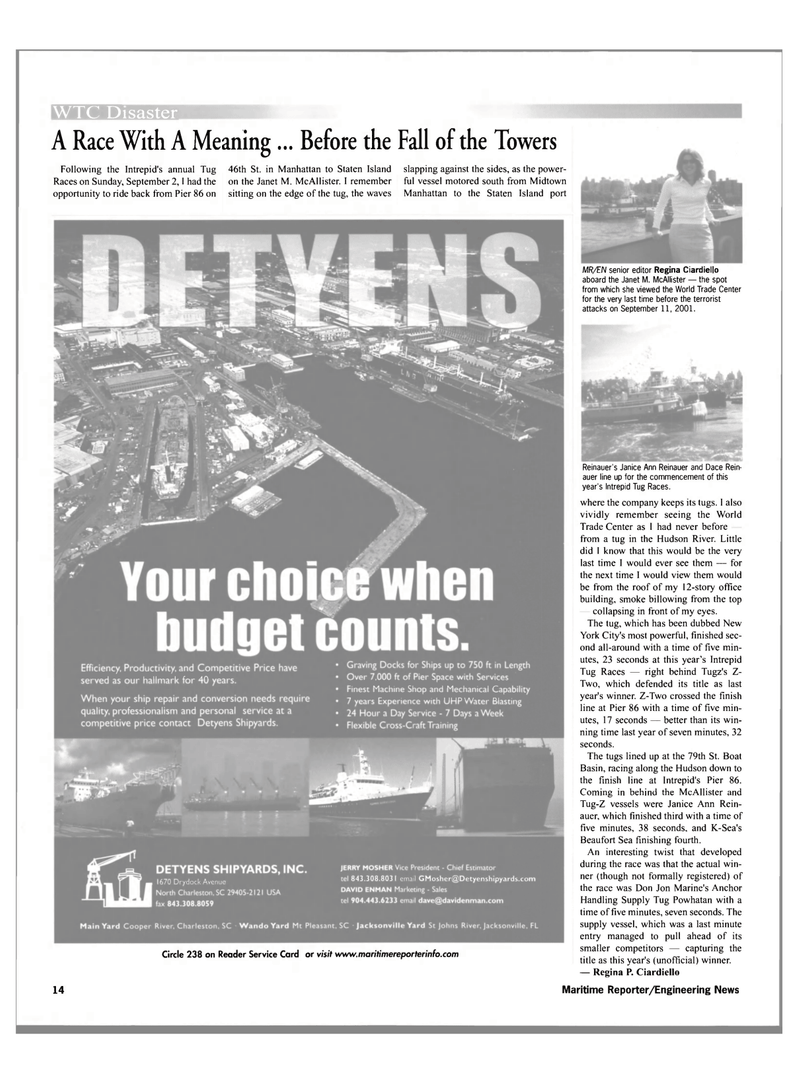 A Race With A Meaning ... Before the Fall of the Towers

Races on Sunday, September 2,1 had the opportunity to ride back from Pier 86 on 46th St. in Manhattan to Staten Island on the Janet M. McAllister. I remember sitting on the edge of the tug, the waves slapping against the sides, as the power- ful vessel motored south from Midtown

Manhattan to the Staten Island port

MR/EN senior editor Regina Ciardiello aboard the Janet M. McAllister — the spot from which she viewed the World Trade Center for the very last time before the terrorist attacks on September 11, 2001.

Reinauer's Janice Ann Reinauer and Dace Rein- auer line up for the commencement of this year's Intrepid Tug Races. where the company keeps its tugs. I also vividly remember seeing the World

Trade Center as I had never before from a tug in the Hudson River. Little did 1 know that this would be the very last time I would ever see them - - for the next time I would view them would be from the roof of my 12-story office building, smoke billowing from the top collapsing in front of my eyes.

The tug, which has been dubbed New

York City's most powerful, finished sec- ond all-around with a time of five min- utes, 23 seconds at this year's Intrepid

Two, which defended its title as last year's winner. Z-Two crossed the finish line at Pier 86 with a time of five min- utes, 17 seconds — better than its win- ning time last year of seven minutes, 32 seconds.

The tugs lined up at the 79th St. Boat

Basin, racing along the Hudson down to the finish line at Intrepid's Pier 86.

Coming in behind the McAllister and

Tug-Z vessels were Janice Ann Rein- auer, which finished third with a time of five minutes, 38 seconds, and K-Sea's

Handling Supply Tug Powhatan with a time of five minutes, seven seconds. The supply vessel, which was a last minute entry managed to pull ahead of its smaller competitors — capturing the title as this year's (unofficial) winner. — Regina P. Ciardiello 14 Maritime Reporter/Engineering News