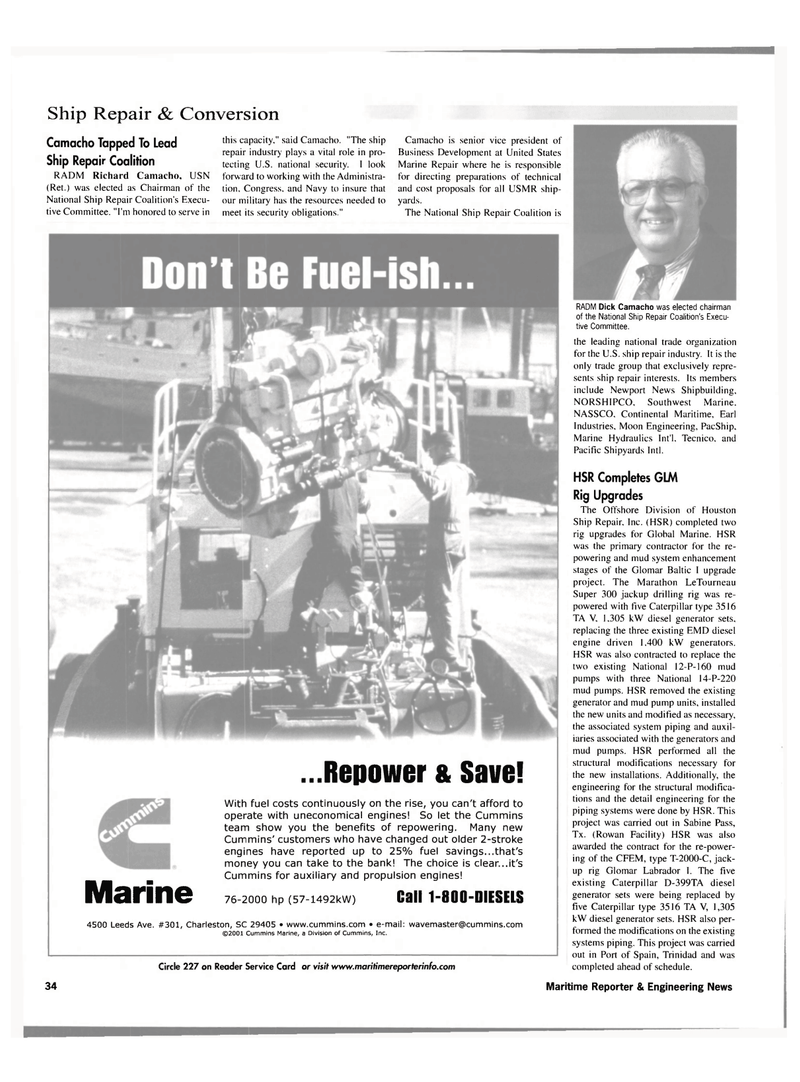 RADM Richard Camacho, USN (Ret.) was elected as Chairman of the

National Ship Repair Coalition's Execu- tive Committee. "I'm honored to serve in this capacity," said Camacho. "The ship repair industry plays a vital role in pro- tecting U.S. national security. I look forward to working with the Administra- tion. Congress, and Navy to insure that our military has the resources needed to meet its security obligations."

Camacho is senior vice president of

Marine Repair where he is responsible for directing preparations of technical and cost proposals for all USMR ship- yards.

The National Ship Repair Coalition is

The Offshore Division of Houston

Ship Repair. Inc. (HSR) completed two rig upgrades for Global Marine. HSR was the primary contractor for the re- powering and mud system enhancement stages of the Glomar Baltic I upgrade project. The Marathon LeTourneau

HSR was also contracted to replace the two existing National 12-P-160 mud pumps with three National 14-P-220 mud pumps. HSR removed the existing generator and mud pump units, installed the new units and modified as necessary, the associated system piping and auxil- iaries associated with the generators and mud pumps. HSR performed all the structural modifications necessary for the new installations. Additionally, the engineering for the structural modifica- tions and the detail engineering for the piping systems were done by HSR. This project was carried out in Sabine Pass,

Tx. (Rowan Facility) HSR was also awarded the contract for the re-power- ing of the CFEM, type T-2000-C, jack- up rig Glomar Labrador I. The five existing Caterpillar D-399TA diesel generator sets were being replaced by five Caterpillar type 3516 TA V, 1,305 kW diesel generator sets. HSR also per- formed the modifications on the existing systems piping. This project was carried out in Port of Spain, Trinidad and was completed ahead of schedule.

With fuel costs continuously on the rise, you can't afford to operate with uneconomical engines! So let the Cummins team show you the benefits of repowering. Many new

Cummins' customers who have changed out older 2-stroke engines have reported up to 25% fuel savings...that's money you can take to the bank! The choice is clear...it's