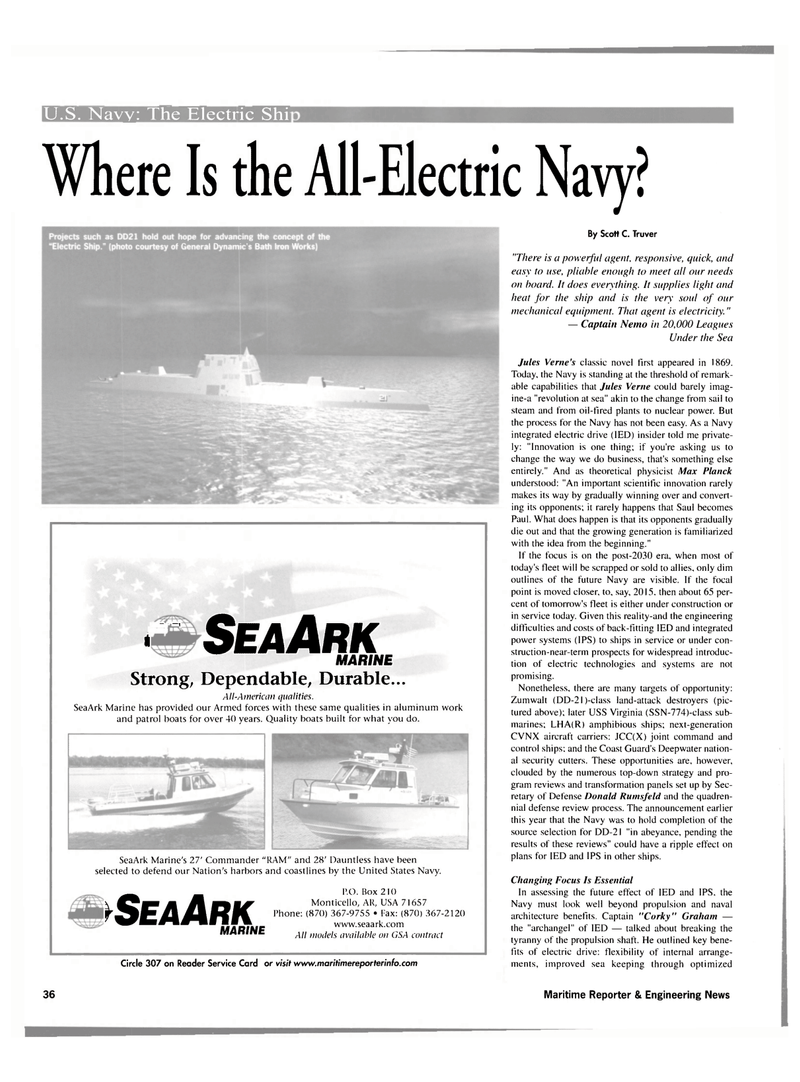 Where Is the All-Electric Navy? mm i « Ml i SEAARK

SeaArk Marine has provided our Armed forces with these same qualities in aluminum work and patrol boats for over 40 years. Quality boats built for what you do.

SeaArk Marine's 27' Commander "RAM" and 28' Dauntless have been selected to defend our Nation's harbors and coastlines by the United States Navy. •SEAARK MARINE

All models available on GS.4 contract

By Scott C. Truver "There is a powerful agent, responsive, quick, and easy to use, pliable enough to meet all our needs on board. It does everything. It supplies light and heat for the ship and is the very soul of our mechanical equipment. That agent is electricity." — Captain Nemo in 20,000 Leagues

Today, the Navy is standing at the threshold of remark- able capabilities that Jules Verne could barely imag- ine-a "revolution at sea" akin to the change from sail to steam and from oil-fired plants to nuclear power. But the process for the Navy has not been easy. As a Navy integrated electric drive (IED) insider told me private- ly: "Innovation is one thing; if you're asking us to change the way we do business, that's something else entirely." And as theoretical physicist Max Planck understood: "An important scientific innovation rarely makes its way by gradually winning over and convert- ing its opponents; it rarely happens that Saul becomes

Paul. What does happen is that its opponents gradually die out and that the growing generation is familiarized with the idea from the beginning."

If the focus is on the post-2030 era, when most of today's fleet will be scrapped or sold to allies, only dim outlines of the future Navy are visible. If the focal point is moved closer, to, say, 2015. then about 65 per- cent of tomorrow's fleet is either under construction or in service today. Given this reality-and the engineering difficulties and costs of back-fitting IED and integrated power systems (IPS) to ships in service or under con- struction-near-term prospects for widespread introduc- tion of electric technologies and systems are not promising.

Nonetheless, there are many targets of opportunity:

CVNX aircraft carriers: JCC(X) joint command and control ships: and the Coast Guard's Deepwater nation- al security cutters. These opportunities are, however, clouded by the numerous top-down strategy and pro- gram reviews and transformation panels set up by Sec- retary of Defense Donald Rumsfeld and the quadren- nial defense review process. The announcement earlier this year that the Navy was to hold completion of the source selection for DD-21 "in abeyance, pending the results of these reviews" could have a ripple effect on plans for IED and IPS in other ships.

In assessing the future effect of IED and IPS. the