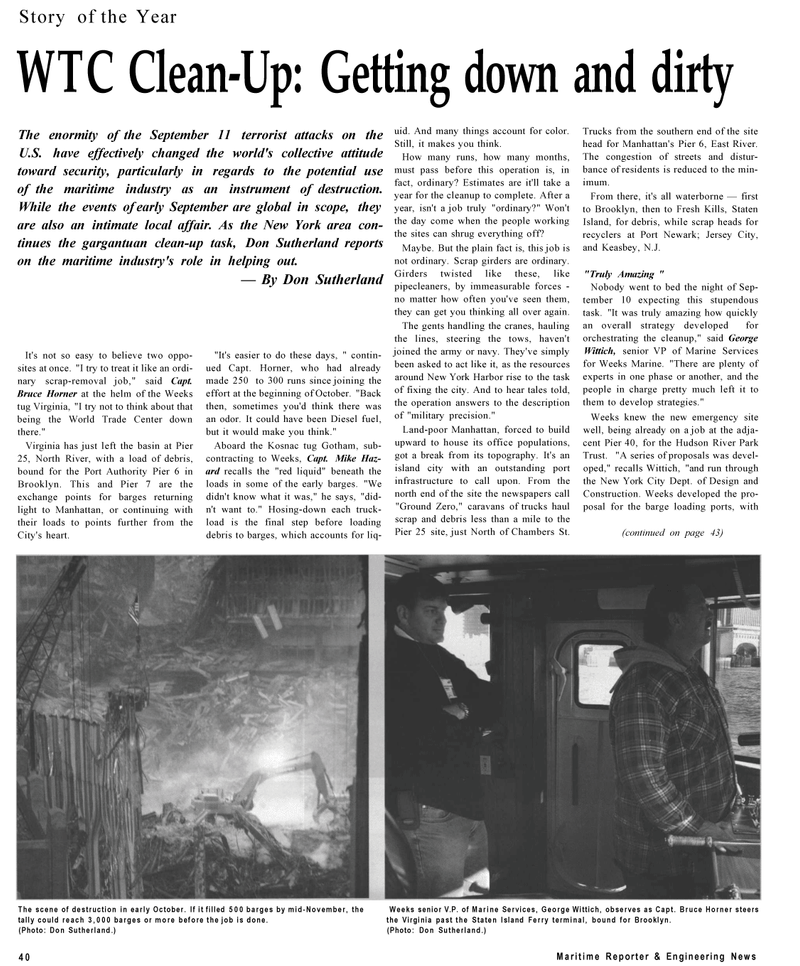 Story of the Year

WTC Clean-Up: Getting down and dirty

The enormity of the September 11 terrorist attacks on the

U.S. have effectively changed the world's collective attitude toward security, particularly in regards to the potential use of the maritime industry as an instrument of destruction.

While the events of early September are global in scope, they are also an intimate local affair. As the New York area con- tinues the gargantuan clean-up task, Don Sutherland reports on the maritime industry's role in helping out. — By Don Sutherland

It's not so easy to believe two oppo- sites at once. "I try to treat it like an ordi- nary scrap-removal job," said Capt.

Bruce Horner at the helm of the Weeks tug Virginia, "I try not to think about that being the World Trade Center down there."

Virginia has just left the basin at Pier 25, North River, with a load of debris, bound for the Port Authority Pier 6 in

Brooklyn. This and Pier 7 are the exchange points for barges returning light to Manhattan, or continuing with their loads to points further from the

City's heart. "It's easier to do these days, " contin- ued Capt. Horner, who had already made 250 to 300 runs since joining the effort at the beginning of October. "Back then, sometimes you'd think there was an odor. It could have been Diesel fuel, but it would make you think."

Aboard the Kosnac tug Gotham, sub- contracting to Weeks, Capt. Mike Haz- ard recalls the "red liquid" beneath the loads in some of the early barges. "We didn't know what it was," he says, "did- n't want to." Hosing-down each truck- load is the final step before loading debris to barges, which accounts for liq- uid. And many things account for color.

Still, it makes you think.

How many runs, how many months, must pass before this operation is, in fact, ordinary? Estimates are it'll take a year for the cleanup to complete. After a year, isn't a job truly "ordinary?" Won't the day come when the people working the sites can shrug everything off?

Maybe. But the plain fact is, this job is not ordinary. Scrap girders are ordinary.

Girders twisted like these, like pipecleaners, by immeasurable forces - no matter how often you've seen them, they can get you thinking all over again.

The gents handling the cranes, hauling the lines, steering the tows, haven't joined the army or navy. They've simply been asked to act like it, as the resources around New York Harbor rise to the task of fixing the city. And to hear tales told, the operation answers to the description of "military precision."

Land-poor Manhattan, forced to build upward to house its office populations, got a break from its topography. It's an island city with an outstanding port infrastructure to call upon. From the north end of the site the newspapers call "Ground Zero," caravans of trucks haul scrap and debris less than a mile to the

Trucks from the southern end of the site head for Manhattan's Pier 6, East River.

The congestion of streets and distur- bance of residents is reduced to the min- imum.

From there, it's all waterborne — first to Brooklyn, then to Fresh Kills, Staten

Nobody went to bed the night of Sep- tember 10 expecting this stupendous task. "It was truly amazing how quickly an overall strategy developed for orchestrating the cleanup," said George

Wittich, senior VP of Marine Services for Weeks Marine. "There are plenty of experts in one phase or another, and the people in charge pretty much left it to them to develop strategies."

Weeks knew the new emergency site well, being already on a job at the adja- cent Pier 40, for the Hudson River Park

Trust. "A series of proposals was devel- oped," recalls Wittich, "and run through the New York City Dept. of Design and

Construction. Weeks developed the pro- posal for the barge loading ports, with (continued on page 43)

The scene of destruction in early October. If it filled 500 barges by mid-November, the Weeks senior V.P. of Marine Services, George Wittich, observes as Capt. Bruce Horner steers tally could reach 3,000 barges or more before the job is done. the Virginia past the Staten Island Ferry terminal, bound for Brooklyn. (Photo: Don Sutherland.) (Photo: Don Sutherland.) 40 Maritime Reporter & Engineering News