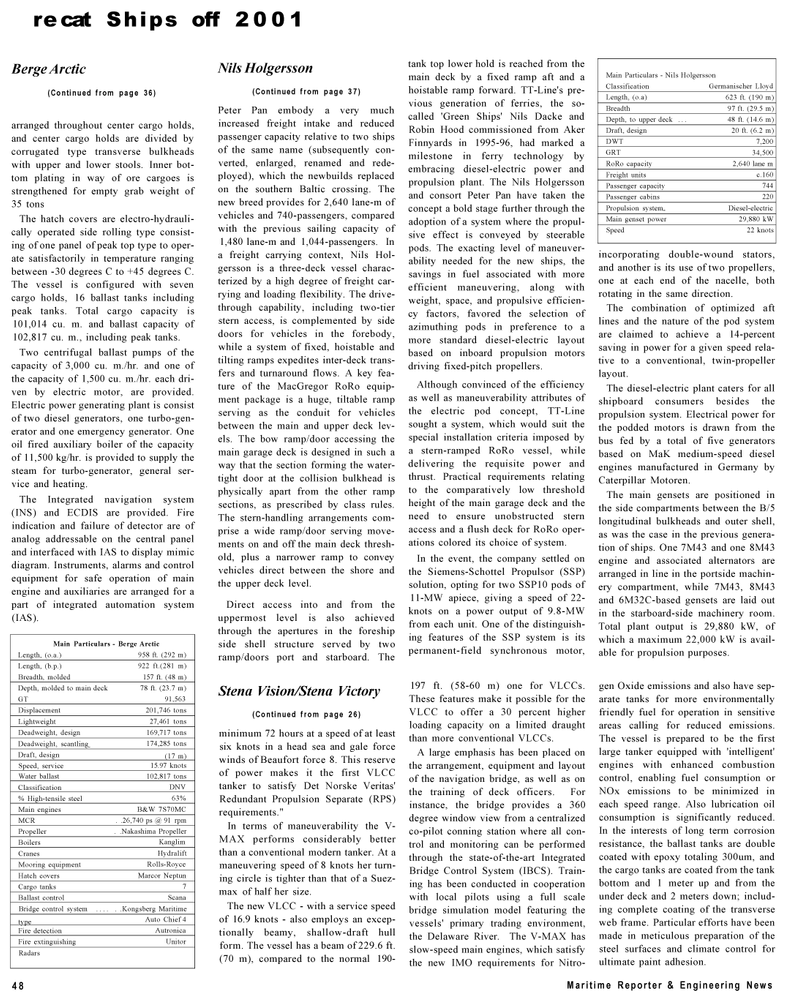 The hatch covers are electro-hydrauli- cally operated side rolling type consist- ing of one panel of peak top type to oper- ate satisfactorily in temperature ranging between -30 degrees C to +45 degrees C.

Electric power generating plant is consist of two diesel generators, one turbo-gen- erator and one emergency generator. One oil fired auxiliary boiler of the capacity of 11,500 kg/hr. is provided to supply the steam for turbo-generator, general ser- vice and heating.

The Integrated navigation system (INS) and ECDIS are provided. Fire indication and failure of detector are of analog addressable on the central panel and interfaced with IAS to display mimic diagram. Instruments, alarms and control equipment for safe operation of main engine and auxiliaries are arranged for a part of integrated automation system (IAS).

Peter Pan embody a very much increased freight intake and reduced passenger capacity relative to two ships of the same name (subsequently con- verted, enlarged, renamed and rede- ployed), which the newbuilds replaced on the southern Baltic crossing. The new breed provides for 2,640 lane-m of vehicles and 740-passengers, compared with the previous sailing capacity of 1,480 lane-m and 1,044-passengers. In a freight carrying context, Nils Hol- gersson is a three-deck vessel charac- terized by a high degree of freight car- rying and loading flexibility. The drive- through capability, including two-tier stern access, is complemented by side doors for vehicles in the forebody, while a system of fixed, hoistable and tilting ramps expedites inter-deck trans- fers and turnaround flows. A key fea- ture of the MacGregor RoRo equip- ment package is a huge, tiltable ramp serving as the conduit for vehicles between the main and upper deck lev- els. The bow ramp/door accessing the main garage deck is designed in such a way that the section forming the water- tight door at the collision bulkhead is physically apart from the other ramp sections, as prescribed by class rules.

The stern-handling arrangements com- prise a wide ramp/door serving move- ments on and off the main deck thresh- old, plus a narrower ramp to convey vehicles direct between the shore and the upper deck level.

Direct access into and from the uppermost level is also achieved through the apertures in the foreship side shell structure served by two ramp/doors port and starboard. The tank top lower hold is reached from the main deck by a fixed ramp aft and a hoistable ramp forward. TT-Line's pre- vious generation of ferries, the so- called 'Green Ships' Nils Dacke and

Finnyards in 1995-96, had marked a milestone in ferry technology by embracing diesel-electric power and propulsion plant. The Nils Holgersson and consort Peter Pan have taken the concept a bold stage further through the adoption of a system where the propul- sive effect is conveyed by steerable pods. The exacting level of maneuver- ability needed for the new ships, the savings in fuel associated with more efficient maneuvering, along with weight, space, and propulsive efficien- cy factors, favored the selection of azimuthing pods in preference to a more standard diesel-electric layout based on inboard propulsion motors driving fixed-pitch propellers.

Although convinced of the efficiency as well as maneuverability attributes of the electric pod concept, TT-Line sought a system, which would suit the special installation criteria imposed by a stern-ramped RoRo vessel, while delivering the requisite power and thrust. Practical requirements relating to the comparatively low threshold height of the main garage deck and the need to ensure unobstructed stern access and a flush deck for RoRo oper- ations colored its choice of system.

In the event, the company settled on the Siemens-Schottel Propulsor (SSP) solution, opting for two SSP10 pods of 11-MW apiece, giving a speed of 22- knots on a power output of 9.8-MW from each unit. One of the distinguish- ing features of the SSP system is its permanent-field synchronous motor,

Speed 22 knots incorporating double-wound stators, and another is its use of two propellers, one at each end of the nacelle, both rotating in the same direction.

The combination of optimized aft lines and the nature of the pod system are claimed to achieve a 14-percent saving in power for a given speed rela- tive to a conventional, twin-propeller layout.

The diesel-electric plant caters for all shipboard consumers besides the propulsion system. Electrical power for the podded motors is drawn from the bus fed by a total of five generators based on MaK medium-speed diesel engines manufactured in Germany by

The main gensets are positioned in the side compartments between the B/5 longitudinal bulkheads and outer shell, as was the case in the previous genera- tion of ships. One 7M43 and one 8M43 engine and associated alternators are arranged in line in the portside machin- ery compartment, while 7M43, 8M43 and 6M32C-based gensets are laid out in the starboard-side machinery room.

Stena Vision/Stena Victory (Continued from page 26) minimum 72 hours at a speed of at least six knots in a head sea and gale force winds of Beaufort force 8. This reserve of power makes it the first VLCC tanker to satisfy Det Norske Veritas'

MAX performs considerably better than a conventional modern tanker. At a maneuvering speed of 8 knots her turn- ing circle is tighter than that of a Suez- max of half her size.

These features make it possible for the

VLCC to offer a 30 percent higher loading capacity on a limited draught than more conventional VLCCs.

A large emphasis has been placed on the arrangement, equipment and layout of the navigation bridge, as well as on the training of deck officers. For instance, the bridge provides a 360 degree window view from a centralized co-pilot conning station where all con- trol and monitoring can be performed through the state-of-the-art Integrated

The vessel is prepared to be the first large tanker equipped with 'intelligent' engines with enhanced combustion control, enabling fuel consumption or

NOx emissions to be minimized in each speed range. Also lubrication oil consumption is significantly reduced.

In the interests of long term corrosion resistance, the ballast tanks are double coated with epoxy totaling 300um, and the cargo tanks are coated from the tank bottom and 1 meter up and from the under deck and 2 meters down; includ- ing complete coating of the transverse web frame. Particular efforts have been made in meticulous preparation of the steel surfaces and climate control for ultimate paint adhesion. 48 Maritime Reporter & Engineering News