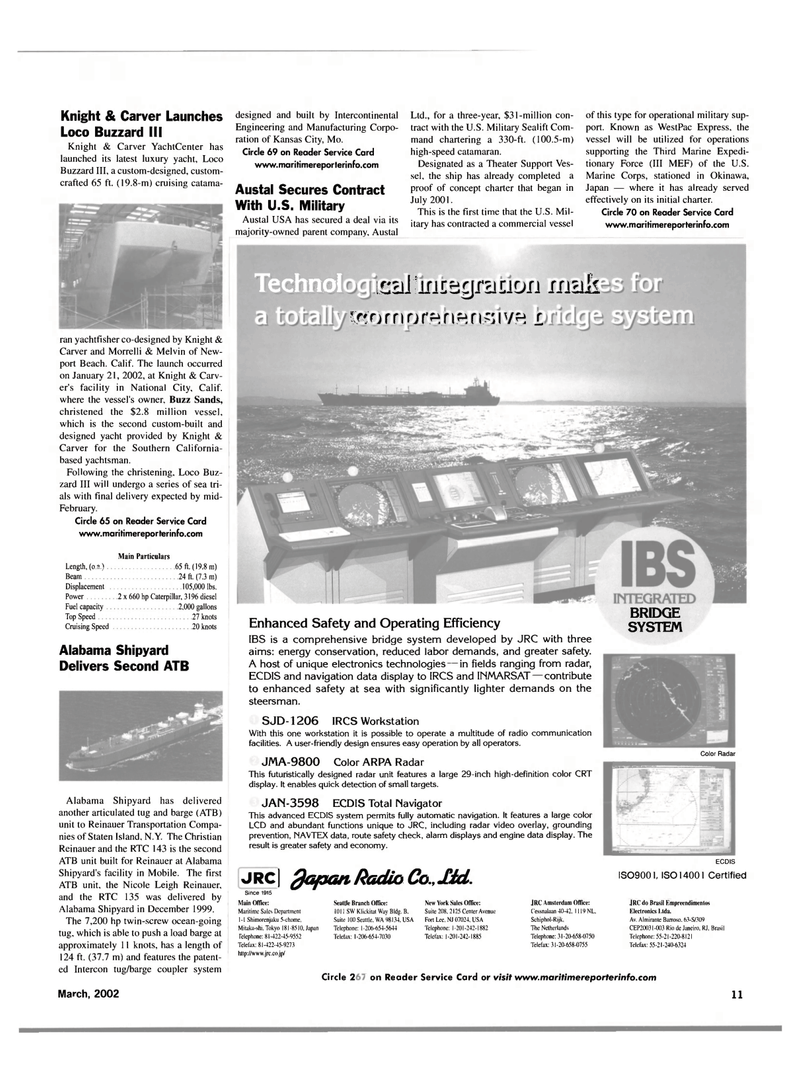 Carver and Morrelli & Melvin of New- port Beach. Calif. The launch occurred on January 21, 2002, at Knight & Carv- er's facility in National City, Calif, where the vessel's owner, Buzz Sands, christened the $2.8 million vessel, which is the second custom-built and designed yacht provided by Knight &

Carver for the Southern California- based yachtsman.

Reinauer and the RTC 143 is the second

Shipyard's facility in Mobile. The first

ATB unit, the Nicole Leigh Reinauer, and the RTC 135 was delivered by

The 7,200 hp twin-screw ocean-going tug, which is able to push a load barge at approximately 11 knots, has a length of 124 ft. (37.7 m) and features the patent- ed Intercon tug/barge coupler system designed and built by Intercontinental

Austal USA has secured a deal via its majority-owned parent company, Austal

Designated as a Theater Support Ves- sel, the ship has already completed a proof of concept charter that began in

This is the first time that the U.S. Mil- itary has contracted a commercial vessel of this type for operational military sup- port. Known as WestPac Express, the vessel will be utilized for operations supporting the Third Marine Expedi- tionary Force (III MEF) of the U.S.

Japan — where it has already served effectively on its initial charter.

A host of unique electronics technologies in fields ranging from radar,

ECDIS and navigation data display to IRCS and INMARSAT contribute to enhanced safety at sea with significantly lighter demands on the steersman.

With this one workstation it is possible to operate a multitude of radio communication facilities. A user-friendly design ensures easy operation by all operators.