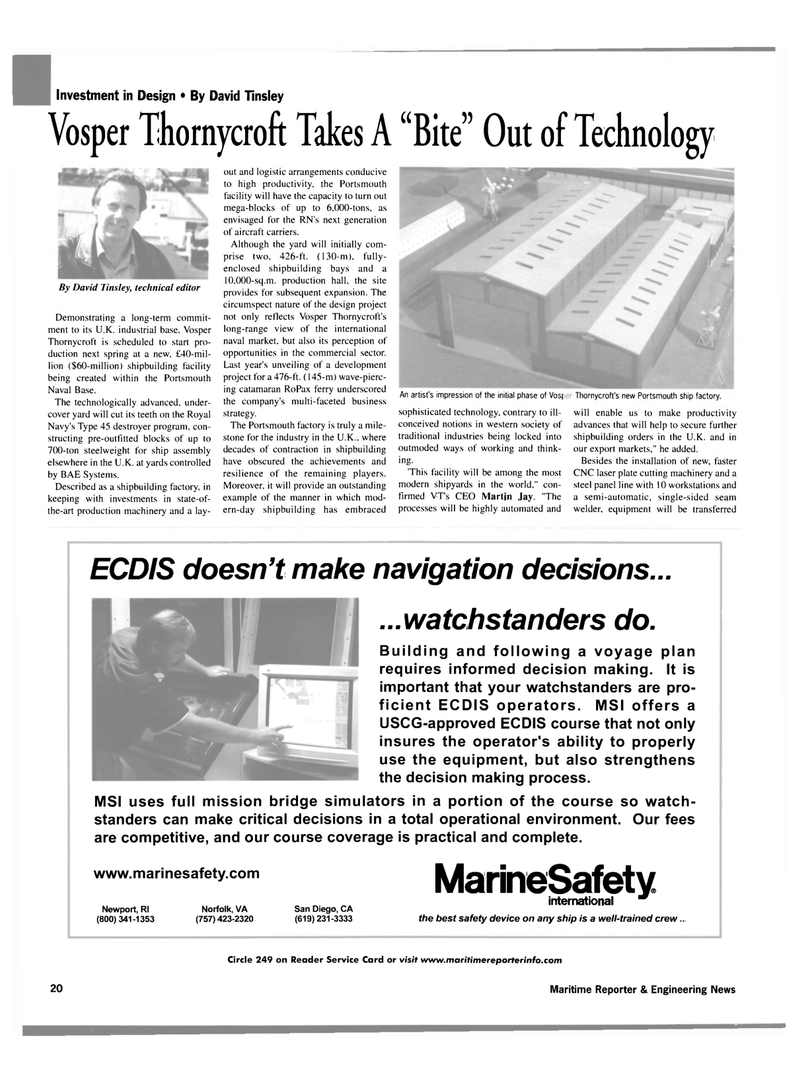 Investment in Design • By David Tinsley

Vosper Thornycroft Takes A "Bite" Out of Technology

Demonstrating a long-term commit- ment to its U.K. industrial base. Vosper

Thornycroft is scheduled to start pro- duction next spring at a new, £40-mil- lion ($60-million) shipbuilding facility being created within the Portsmouth

The technologically advanced, under- cover yard will cut its teeth on the Royal

Navy's Type 45 destroyer program, con- structing pre-outfitted blocks of up to 700-ton steelweight for ship assembly elsewhere in the U.K. at yards controlled by BAE Systems.

Described as a shipbuilding factory, in keeping with investments in state-of- the-art production machinery and a lay- out and logistic arrangements conducive to high productivity, the Portsmouth facility will have the capacity to turn out mega-blocks of up to 6,000-tons, as envisaged for the RN's next generation of aircraft carriers.

Although the yard will initially com- prise two, 426-ft. (130-m), fully- enclosed shipbuilding bays and a 10.000-sq.m. production hall, the site provides for subsequent expansion. The circumspect nature of the design project not only reflects Vosper Thornycroft's long-range view of the international naval market, but also its perception of opportunities in the commercial sector.

The Portsmouth factory is truly a mile- stone for the industry in the U.K.. where decades of contraction in shipbuilding have obscured the achievements and resilience of the remaining players.

Moreover, it will provide an outstanding example of the manner in which mod- ern-day shipbuilding has embraced

An artist's impression of the initial phase of Vos( sophisticated technology, contrary to ill- conceived notions in western society of traditional industries being locked into outmoded ways of working and think- ing. "This facility will be among the most modern shipyards in the world," con- firmed VT's CEO Martin Jay. "The processes will be highly automated and

Thornycroft's new Portsmouth ship factory. will enable us to make productivity advances that will help to secure further shipbuilding orders in the U.K. and in our export markets," he added.

Besides the installation of new, faster

CNC laser plate cutting machinery and a steel panel line with 10 workstations and a semi-automatic, single-sided seam welder, equipment will be transferred

Building and following a voyage plan requires informed decision making. It is important that your watchstanders are pro- ficient ECDIS operators. MSI offers a

USCG-approved ECDIS course that not only insures the operator's ability to properly use the equipment, but also strengthens the decision making process.

MSI uses full mission bridge simulators in a portion of the course so watch- standers can make critical decisions in a total operational environment. Our fees are competitive, and our course coverage is practical and complete. www.marinesafety.com

MarineSafety. international the best safety device on any ship is a well-trained crew...