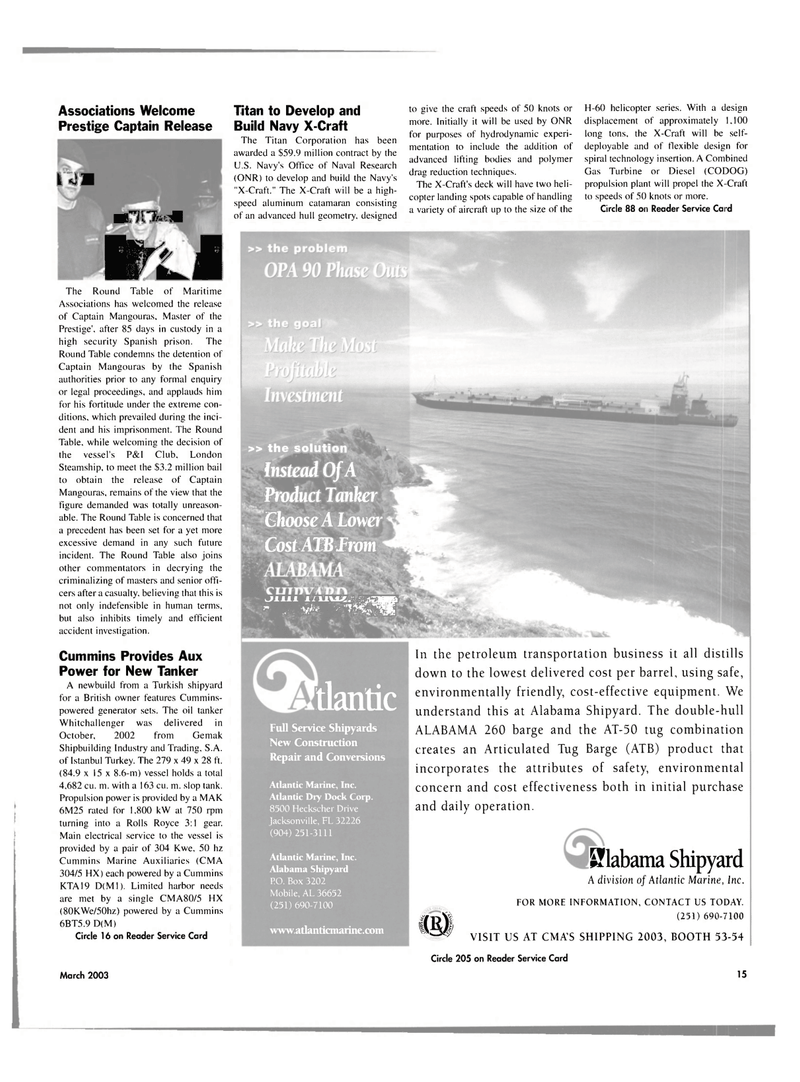 The Round Table of Maritime

Associations has welcomed the release of Captain Mangouras, Master of the

Prestige', after 85 days in custody in a high security Spanish prison. The

Round Table condemns the detention of

Captain Mangouras by the Spanish authorities prior to any formal enquiry or legal proceedings, and applauds him for his fortitude under the extreme con- ditions, which prevailed during the inci- dent and his imprisonment. The Round

Table, while welcoming the decision of the vessel's P&I Club, London

Steamship, to meet the $3.2 million bail to obtain the release of Captain

Mangouras, remains of the view that the figure demanded was totally unreason- able. The Round Table is concerned that a precedent has been set for a yet more excessive demand in any such future incident. The Round Table also joins other commentators in decrying the criminalizing of masters and senior offi- cers after a casualty, believing that this is not only indefensible in human terms, but also inhibits timely and efficient accident investigation.

A newbuild from a Turkish shipyard for a British owner features Cummins- powered generator sets. The oil tanker

Main electrical service to the vessel is provided by a pair of 304 Kwe, 50 hz

Titan to Develop and

The Titan Corporation has been awarded a $59.9 million contract by the

U.S. Navy's Office of Naval Research (ONR) to develop and build the Navy's "X-Craft." The X-Craft will be a high- speed aluminum catamaran consisting of an advanced hull geometry, designed to give the craft speeds of 50 knots or more. Initially it will be used by ONR for purposes of hydrodynamic experi- mentation to include the addition of advanced lifting bodies and polymer drag reduction techniques.

H-60 helicopter series. With a design displacement of approximately 1,100 long tons, the X-Craft will be self- deployable and of flexible design for spiral technology insertion. A Combined

Gas Turbine or Diesel (CODOG) propulsion plant will propel the X-Craft to speeds of 50 knots or more.

In the petroleum transportation business it all distills down to the lowest delivered cost per barrel, using safe, environmentally friendly, cost-effective equipment. We understand this at Alabama Shipyard. The double-hull

ALABAMA 260 barge and the AT-50 tug combination creates an Articulated Tug Barge (ATB) product that incorporates the attributes of safety, environmental concern and cost effectiveness both in initial purchase and daily operation.

A division of Atlantic Marine, Inc.