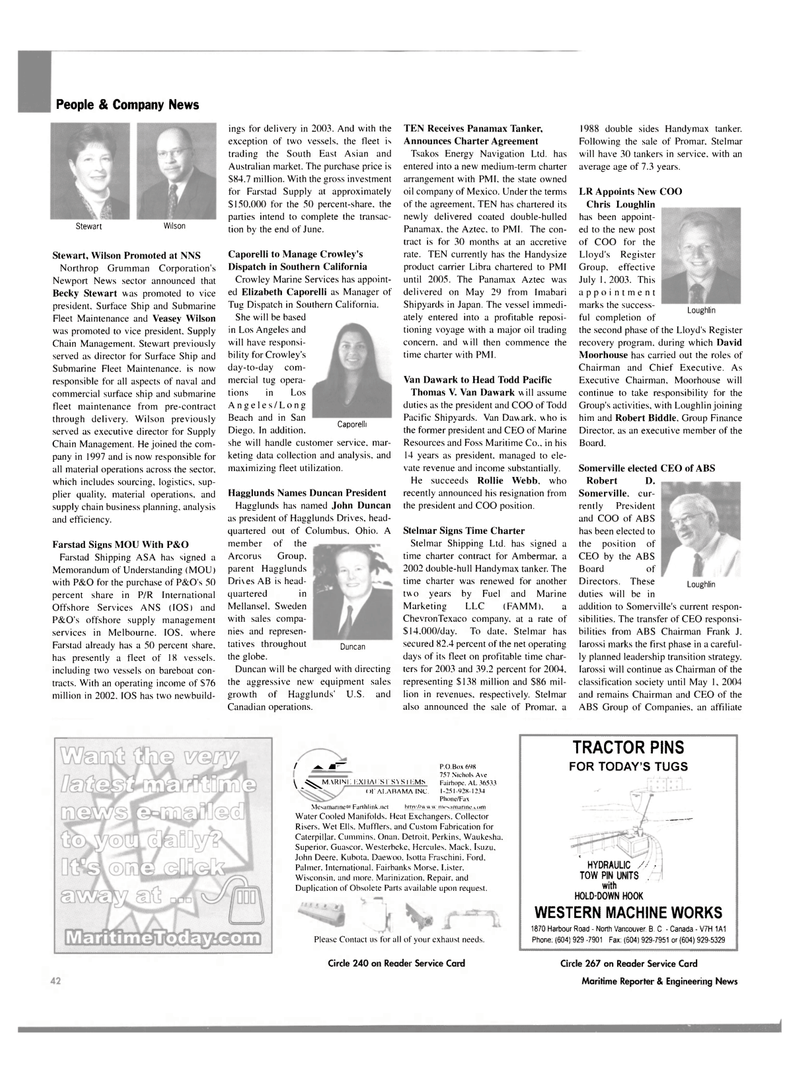 Submarine Fleet Maintenance, is now responsible for all aspects of naval and commercial surface ship and submarine fleet maintenance from pre-contract through delivery. Wilson previously served as executive director for Supply

Chain Management. He joined the com- pany in 1997 and is now responsible for all material operations across the sector, which includes sourcing, logistics, sup- plier quality, material operations, and supply chain business planning, analysis and efficiency.

Farstad Shipping ASA has signed a

Farstad already has a 50 percent share, has presently a fleet of 18 vessels, including two vessels on bareboat con- tracts. With an operating income of S76 million in 2002, IOS has two newbuild- ings for delivery in 2003. And with the exception of two vessels, the fleet is trading the South East Asian and

Australian market. The purchase price is

S84.7 million. With the gross investment for Farstad Supply at approximately $150,000 for the 50 percent-share, the parties intend to complete the transac- tion by the end of June.

Beach and in San

Hagglunds has named John Duncan as president of Hagglunds Drives, head- quartered out of Columbus. Ohio. A member of the

Drives AB is head- quartered in

Mellansel. Sweden with sales compa- nies and represen- tatives throughout the globe.

Duncan will be charged with directing the aggressive new equipment sales growth of Hagglunds' U.S. and

Tsakos Energy Navigation Ltd. has entered into a new medium-term charter arrangement w ith PMI, the state owned oil company of Mexico. Under the terms of the agreement, TEN has chartered its newly delivered coated double-hulled

Panamax. the Aztec, to PMI. The con- tract is for 30 months at an accretive rate. TEN currently has the Handysize product carrier Libra chartered to PMI until 2005. The Panamax Aztec was delivered on May 29 from Imabari

Shipyards in Japan. The vessel immedi- ately entered into a profitable reposi- tioning voyage with a major oil trading concern, and will then commence the time charter w ith PMI.

Thomas V. Van Dawark will assume duties as the president and COO of Todd

Pacific Shipyards. Van Dawark. who is the former president and CEO of Marine

Resources and Foss Maritime Co.. in his 14 years as president, managed to ele- vate revenue and income substantially.

He succeeds Rollie Webb, who recently announced his resignation from the president and COO position.

Stelmar Shipping Ltd. has signed a time charter contract for Ambermar. a 2002 double-hull Handymax tanker. The time charter was renewed for another two years by Fuel and Marine

ChevronTexaco company, at a rate of

S14.000/day. To date. Stelmar has secured 82.4 percent of the net operating days of its fleet on profitable time char- ters for 2003 and 39.2 percent for 2004, representing SI38 million and $86 mil- lion in revenues, respectively. Stelmar also announced the sale of Promar, a

Following the sale of Promar. Stelmar w ill have 30 tankers in service, with an average age of 7.3 years.

July 1. 2003. This appointm e nt marks the success- ful completion of the second phase of the Lloyd's Register recovery program, during which David

Moorhouse has carried out the roles of

Chairman and Chief Executive. As

Executive Chairman, Moorhouse will continue to take responsibility for the

Director, as an executive member of the

Somerville. cur- rently President and COO of ABS has been elected to the position of

CEO by the ABS

Directors. These duties will be in addition to Somerville's current respon- sibilities. The transfer of CEO responsi- bilities from ABS Chairman Frank J.

Iarossi will continue as Chairman of the classification society until May 1, 2004 and remains Chairman and CEO of the

ABS Group of Companies, an affiliate

Wisconsin, and more. Marinization, Repair, and

Please Contact us for all of your exhaust needs.