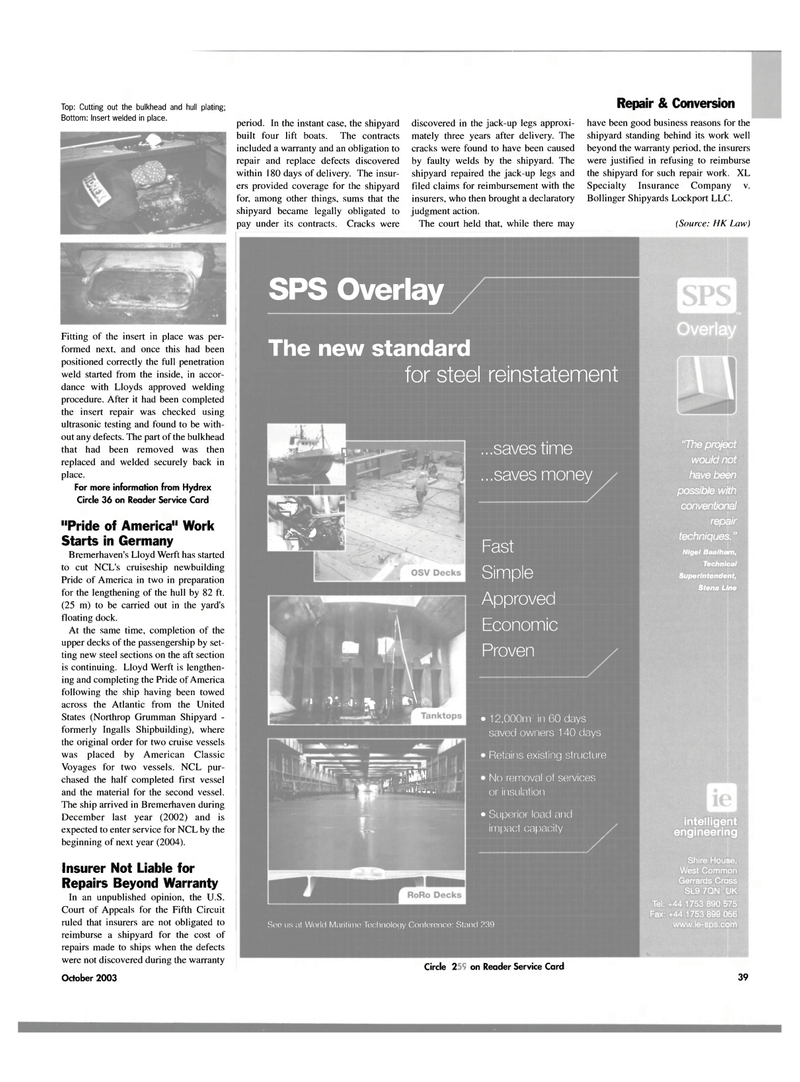 Top: Cutting out the bulkhead and hull plating;

Fitting of the insert in place was per- formed next, and once this had been positioned correctly the full penetration weld started from the inside, in accor- dance with Lloyds approved welding procedure. After it had been completed the insert repair was checked using ultrasonic testing and found to be with- out any defects. The part of the bulkhead that had been removed was then replaced and welded securely back in place.

For more information from Hydrex

Pride of America in two in preparation for the lengthening of the hull by 82 ft. (25 m) to be carried out in the yard's floating dock.

At the same time, completion of the upper decks of the passengership by set- ting new steel sections on the aft section is continuing. Lloyd Werft is lengthen- ing and completing the Pride of America following the ship having been towed across the Atlantic from the United

Voyages for two vessels. NCL pur- chased the half completed first vessel and the material for the second vessel.

The ship arrived in Bremerhaven during

December last year (2002) and is expected to enter service for NCL by the beginning of next year (2004).

Insurer Not Liable for

In an unpublished opinion, the U.S.

October 2003 period. In the instant case, the shipyard built four lift boats. The contracts included a warranty and an obligation to repair and replace defects discovered within 180 days of delivery. The insur- ers provided coverage for the shipyard for, among other things, sums that the shipyard became legally obligated to pay under its contracts. Cracks were discovered in the jack-up legs approxi- mately three years after delivery. The cracks were found to have been caused by faulty welds by the shipyard. The shipyard repaired the jack-up legs and filed claims for reimbursement with the insurers, who then brought a declaratory judgment action.

The court held that, while there may

Repair & Conversion have been good business reasons for the shipyard standing behind its work well beyond the warranty period, the insurers were justified in refusing to reimburse the shipyard for such repair work. XL

The new standard for steel reinstatement

Proven "The project would riot have been possible with conventional repair techniques."