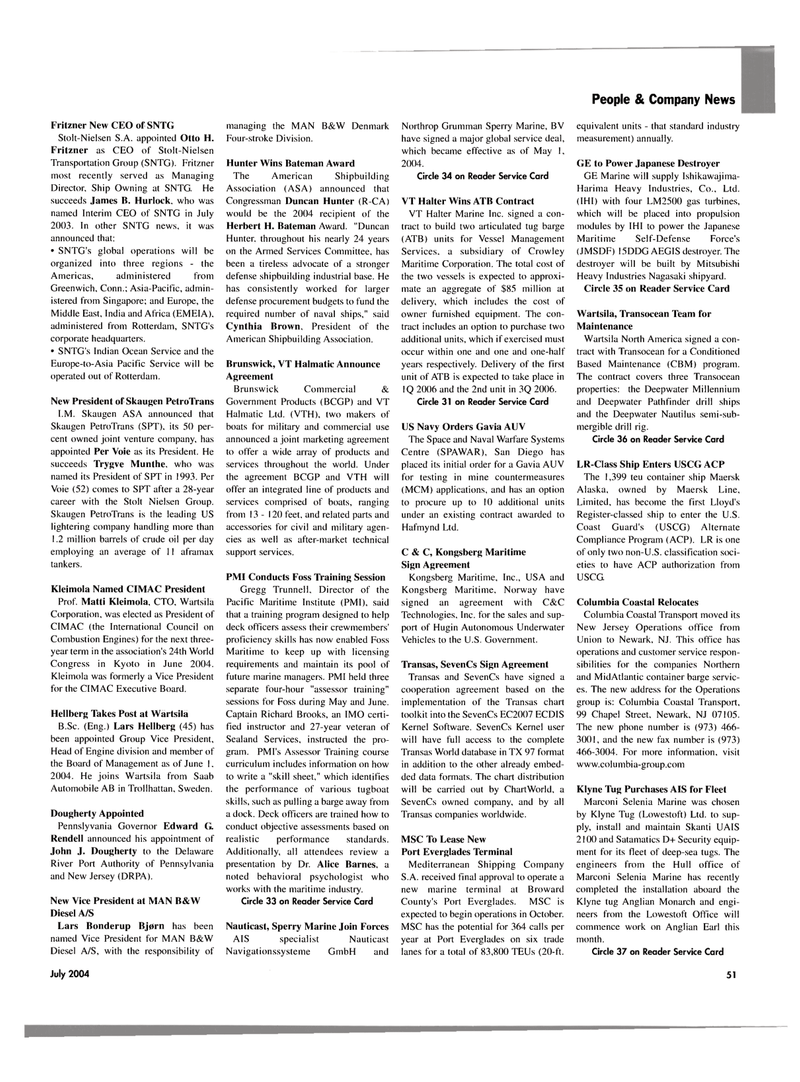 Director, Ship Owning at SNTG. He succeeds James B. Hurlock, who was named Interim CEO of SNTG in July 2003. In other SNTG news, it was announced that: • SNTG's global operations will be organized into three regions - the

Greenwich, Conn.; Asia-Pacific, admin- istered from Singapore; and Europe, the

Europe-to-Asia Pacific Service will be operated out of Rotterdam.

Skaugen PetroTrans (SPT), its 50 per- cent owned joint venture company, has appointed Per Voie as its President. He succeeds Trygve Munthe. who was named its President of SPT in 1993. Per

Voie (52) comes to SPT after a 28-year career with the Stoll Nielsen Group.

Skaugen PetroTrans is the leading US lightering company handling more than 1.2 million barrels of crude oil per day employing an average of 11 aframax tankers.

Corporation, was elected as President of

CIMAC (the International Council on

Kleimola was formerly a Vice President for the CIMAC Executive Board.

Head of Engine division and member of the Board of Management as of June 1. 2004. He joins Wartsila from Saab

Rendell announced his appointment of

John J. Dougherty to the Delaware

Diesel A/S, with the responsibility of managing the MAN B&W Denmark

Hunter, throughout his nearly 24 years on the Armed Services Committee, has been a tireless advocate of a stronger defense shipbuilding industrial base. He has consistently worked for larger defense procurement budgets to fund the required number of naval ships," said

Cynthia Brown, President of the

Halmatic Ltd. (VTH), two makers of boats for military and commercial use announced a joint marketing agreement to offer a wide array of products and services throughout the world. Under the agreement BCGP and VTH will offer an integrated line of products and services comprised of boats, ranging from 13 - 120 feet, and related parts and accessories for civil and military agen- cies as well as after-market technical support services.

Gregg Trunnell, Director of the

Maritime to keep up with licensing requirements and maintain its pool of future marine managers. PMI held three separate four-hour "assessor training" sessions for Foss during May and June.

Sealand Services, instructed the pro- gram. PMI's Assessor Training course curriculum includes information on how to write a "skill sheet," which identifies the performance of various tugboat skills, such as pulling a barge away from a dock. Deck officers are trained how to conduct objective assessments based on realistic performance standards.

Additionally, all attendees review a presentation by Dr. Alice Barnes, a noted behavioral psychologist who works with the maritime industry.

Northrop Grumman Sperry Marine, BV have signed a major global service deal, which became effective as of May 1, 2004.

Services, a subsidiary of Crowley

Maritime Corporation. The total cost of the two vessels is expected to approxi- mate an aggregate of $85 million at delivery, which includes the cost of owner furnished equipment. The con- tract includes an option to purchase two additional units, which if exercised must occur within one and one and one-half years respectively. Delivery of the first unit of ATB is expected to take place in 1Q 2006 and the 2nd unit in 3Q 2006.

The Space and Naval Warfare Systems

Centre (SPAWAR), San Diego has placed its initial order for a Gavia AUV for testing in mine countermeasures (MCM) applications, and has an option to procure up to 10 additional units under an existing contract awarded to

Kongsberg Maritime, Norway have signed an agreement with C&C

Technologies. Inc. for the sales and sup- port of Hugin Autonomous Underwater

Vehicles to the U.S. Government.

Kernel Software. SevenCs Kernel user will have full access to the complete

Transas World database in TX 97 format in addition to the other already embed- ded data formats. The chart distribution will be carried out by ChartWorld, a

SevenCs owned company, and by all

MSC has the potential for 364 calls per year at Port Everglades on six trade lanes for a total of 83,800 TEUs (20-ft. equivalent units - that standard industry measurement) annually.

Harima Heavy Industries, Co., Ltd. (IHI) with four LM2500 gas turbines, which will be placed into propulsion modules by IHI to power the Japanese

Limited, has become the first Lloyd's

Register-classed ship to enter the U.S.

Compliance Program (ACP). LR is one of only two non-U.S. classification soci- eties to have ACP authorization from

Marconi Selenia Marine was chosen by Klyne Tug (Lowestoft) Ltd. to sup- ply, install and maintain Skanti UAIS 2100 and Satamatics D+ Security equip- ment for its fleet of deep-sea tugs. The engineers from the Hull office of

Marconi Selenia Marine has recently completed the installation aboard the

Klyne tug Anglian Monarch and engi- neers from the Lowestoft Office will commence work on Anglian Earl this month.