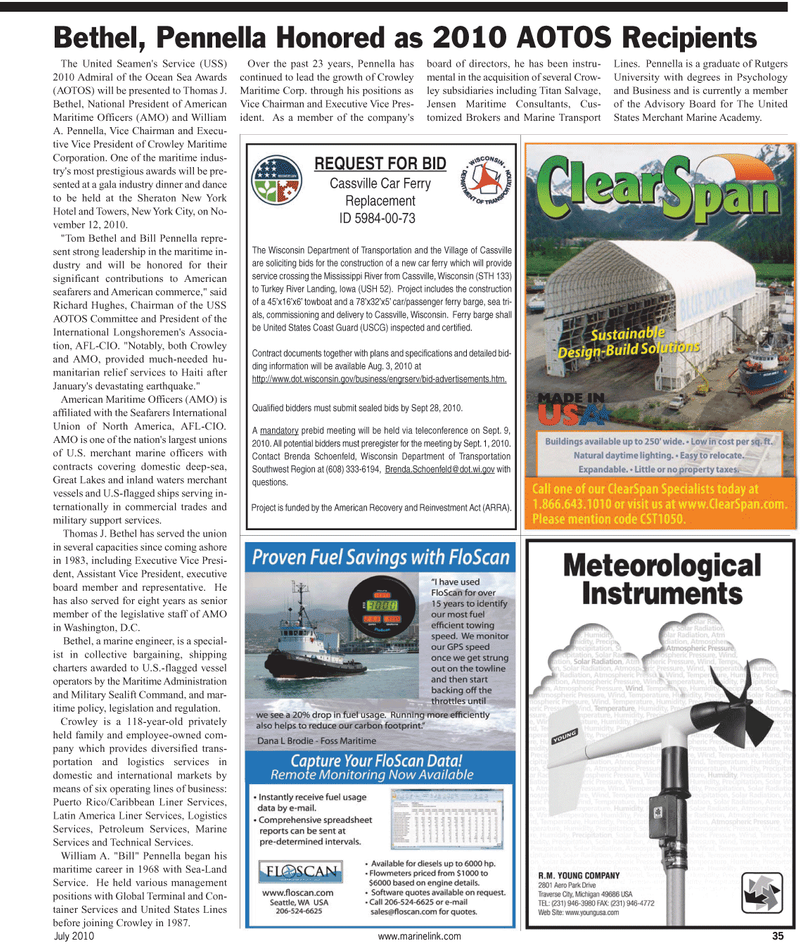 The United Seamen's Service (USS) 2010 Admiral of the Ocean Sea Awards (AOTOS) will be presented to Thomas J.

Corporation. One of the maritime indus- try's most prestigious awards will be pre- sented at a gala industry dinner and dance to be held at the Sheraton New York

Hotel and Towers, New York City, on No- vember 12, 2010. "Tom Bethel and Bill Pennella repre- sent strong leadership in the maritime in- dustry and will be honored for their significant contributions to American seafarers and American commerce," said

Richard Hughes, Chairman of the USS

AOTOS Committee and President of the

American Maritime Officers (AMO) is affiliated with the Seafarers International

AMO is one of the nation's largest unions of U.S. merchant marine officers with contracts covering domestic deep-sea,

Thomas J. Bethel has served the union in several capacities since coming ashore in 1983, including Executive Vice Presi- dent, Assistant Vice President, executive board member and representative. He has also served for eight years as senior member of the legislative staff of AMO in Washington, D.C.

Bethel, a marine engineer, is a special- ist in collective bargaining, shipping charters awarded to U.S.-flagged vessel operators by the Maritime Administration and Military Sealift Command, and mar- itime policy, legislation and regulation.

Crowley is a 118-year-old privately held family and employee-owned com- pany which provides diversified trans- portation and logistics services in domestic and international markets by means of six operating lines of business:

William A. "Bill" Pennella began his maritime career in 1968 with Sea-Land

Over the past 23 years, Pennella has continued to lead the growth of Crowley

Maritime Corp. through his positions as

Vice Chairman and Executive Vice Pres- ident. As a member of the company's board of directors, he has been instru- mental in the acquisition of several Crow- ley subsidiaries including Titan Salvage,

Lines. Pennella is a graduate of Rutgers

Project is funded by the American Recovery and Reinvestment Act (ARRA).

The Wisconsin Department of Transportation and the Village of Cassville are soliciting bids for the construction of a new car ferry which will provide service crossing the Mississippi River from Cassville, Wisconsin (STH 133) to Turkey River Landing, Iowa (USH 52). Project includes the construction of a 45’x16’x6’ towboat and a 78’x32’x5’ car/passenger ferry barge, sea tri- als, commissioning and delivery to Cassville, Wisconsin. Ferry barge shall be United States Coast Guard (USCG) inspected and certified.

Contract documents together with plans and specifications and detailed bid- ding information will be available Aug. 3, 2010 at http://www.dot.wisconsin.gov/business/engrserv/bid-advertisements.htm.

A mandatory prebid meeting will be held via teleconference on Sept. 9, 2010. All potential bidders must preregister for the meeting by Sept. 1, 2010.