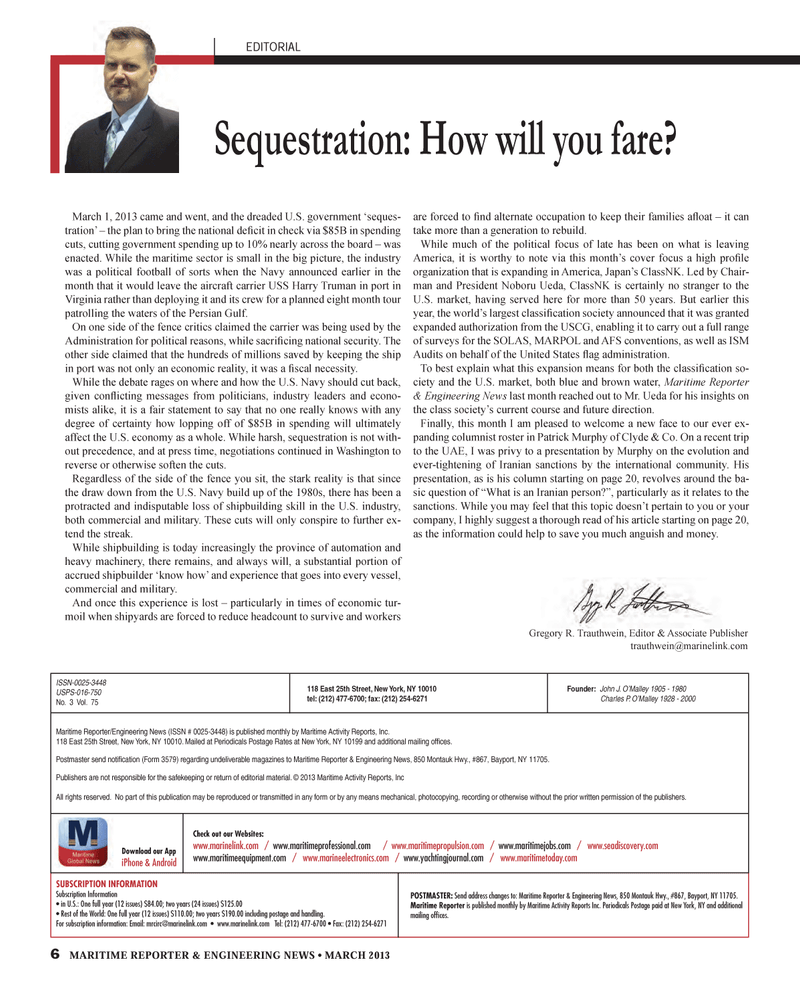 6 MARITIME REPORTER & ENGINEERING NEWS ? MARCH 2013 March 1, 2013 came and went, and the dreaded U.S. government ?seques-tration? ? the plan to bring the national de Þ cit in check via $85B in spending cuts, cutting government spending up to 10% nearly across the board ? was enacted. While the maritime sector is small in the big picture, the industry was a political football of sorts when the Navy announced earlier in the month that it would leave the aircraft carrier USS Harry Truman in port in Virginia rather than deploying it and its crew for a planned eight month tour patrolling the waters of the Persian Gulf.On one side of the fence critics claimed the carrier was being used by the Administration for political reasons, while sacriÞ cing national security. The other side claimed that the hundreds of millions saved by keeping the ship in port was not only an economic reality, it was a Þ scal necessity. While the debate rages on where and how the U.S. Navy should cut back, given conß icting messages from politicians, industry leaders and econo- mists alike, it is a fair statement to say that no one really knows with any degree of certainty how lopping off of $85B in spending will ultimately affect the U.S. economy as a whole. While harsh, sequestration is not with- out precedence, and at press time, negotiations continued in Washington to reverse or otherwise soften the cuts.Regardless of the side of the fence you sit, the stark reality is that since the draw down from the U.S. Navy build up of the 1980s, there has been a protracted and indisputable loss of shipbuilding skill in the U.S. industry, both commercial and military. These cuts will only conspire to further ex- tend the streak.While shipbuilding is today increasingly the province of automation and heavy machinery, there remains, and always will, a substantial portion of accrued shipbuilder ?know how? and experience that goes into every vessel, commercial and military. And once this experience is lost ? particularly in times of economic tur- moil when shipyards are forced to reduce headcount to survive and workers are forced to Þ nd alternate occupation to keep their families aß oat ? it can take more than a generation to rebuild.While much of the political focus of late has been on what is leaving America, it is worthy to note via this month?s cover focus a high pro Þ le organization that is expanding in America, Japan?s ClassNK. Led by Chair- man and President Noboru Ueda, ClassNK is certainly no stranger to the U.S. market, having served here for more than 50 years. But earlier this year, the world?s largest classi Þ cation society announced that it was granted expanded authorization from the USCG, enabling it to carry out a full range of surveys for the SOLAS, MARPOL and AFS conventions, as well as ISM Audits on behalf of the United States ß ag administration. To best explain what this expansion means for both the classi Þ cation so-ciety and the U.S. market, both blue and brown water, Maritime Reporter & Engineering News last month reached out to Mr. Ueda for his insights on the class society?s current course and future direction. Finally, this month I am pleased to welcome a new face to our ever ex- panding columnist roster in Patrick Murphy of Clyde & Co. On a recent trip to the UAE, I was privy to a presentation by Murphy on the evolution and ever-tightening of Iranian sanctions by the international community. His presentation, as is his column starting on page 20, revolves around the ba-sic question of ?What is an Iranian person??, particularly as it relates to the sanctions. While you may feel that this topic doesn?t pertain to you or your company, I highly suggest a thorough read of his article starting on page 20, as the information could help to save you much anguish and money. SUBSCRIPTION INFORMATION Subscription Information  in U.S.: One full year (12 issues) $84.00; two years (24 issues) $125.00  Rest of the World: One full year (12 issues) $110.00; two years $190.00 including postage and handling. For subscription information: Email: [email protected]  www.marinelink.com Tel: (212) 477-6700  Fax: (212) 254-6271 POSTMASTER: Send address changes to: Maritime Reporter & Engineering News, 850 Montauk Hwy., #867, Bayport, NY 11705. Maritime Reporter is published monthly by Maritime Activity Reports Inc. Periodicals Postage paid at New York, NY and additional mailing of ces. ISSN-0025-3448USPS-016-750No. 3 Vol. 75 Maritime Reporter/Engineering News (ISSN # 0025-3448) is published monthly by Maritime Activity Reports, Inc. 118 East 25th Street, New York, NY 10010. Mailed at Periodicals Postage Rates at New York, NY 10199 and additional mailing ofÞ ces. Postmaster send notiÞ cation (Form 3579) regarding undeliverable magazines to Maritime Reporter & Engineering News, 850 Montauk Hwy., #867, Bayport, NY 11705. Publishers are not responsible for the safekeeping or return of editorial material. © 2013 Maritime Activity Reports, Inc All rights reserved. No part of this publication may be reproduced or transmitted in any form or by any means mechanical, photocopying, recording or otherwise without the prior written permission of the publishers. Check out our Websites: www.marinelink.com / www.maritimeprofessional.com / www.maritimepropulsion.com / www.maritimejobs.com / www.seadiscovery.com www.maritimeequipment.com / www.marineelectronics.com / www.yachtingjournal.com / www.maritimetoday.com 118 East 25th Street, New York, NY 10010 tel: (212) 477-6700; fax: (212) 254-6271 Founder: John J. O?Malley 1905 - 1980 Charles P. O?Malley 1928 - 2000 Download our AppiPhone & AndroidEDITORIAL Sequestration: How will you fare? Gregory R. Trauthwein, Editor & Associate Publisher [email protected] #3 (1-9).indd 6MR #3 (1-9).indd 63/4/2013 12:43:38 PM3/4/2013 12:43:38 PM