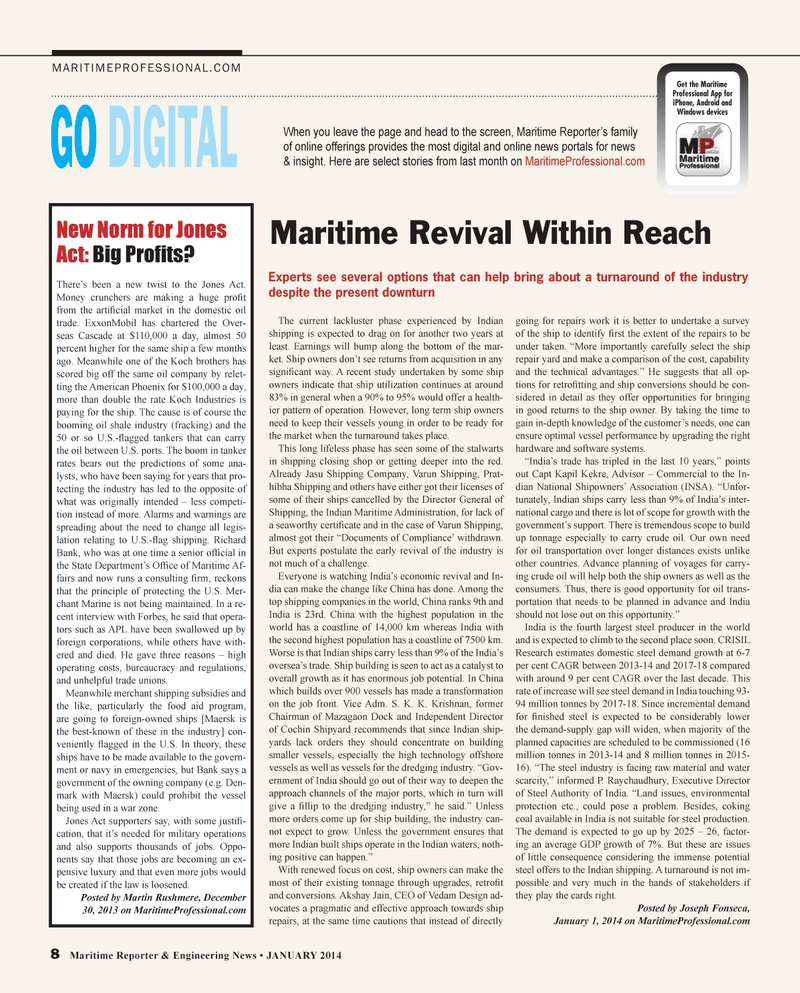 The current lackluster phase experienced by Indian shipping is expected to drag on for another two years at least. Earnings will bump along the bottom of the mar- ket. Ship owners don’t see returns from acquisition in any signifi cant way. A recent study undertaken by some ship owners indicate that ship utilization continues at around 83% in general when a 90% to 95% would offer a health- ier pattern of operation. However, long term ship owners need to keep their vessels young in order to be ready for the market when the turnaround takes place.

This long lifeless phase has seen some of the stalwarts in shipping closing shop or getting deeper into the red.

Already Jasu Shipping Company, Varun Shipping, Prat- hibha Shipping and others have either got their licenses of some of their ships cancelled by the Director General of

Shipping, the Indian Maritime Administration, for lack of a seaworthy certifi cate and in the case of Varun Shipping, almost got their “Documents of Compliance’ withdrawn.

But experts postulate the early revival of the industry is not much of a challenge.

Everyone is watching India’s economic revival and In- dia can make the change like China has done. Among the top shipping companies in the world, China ranks 9th and

Worse is that Indian ships carry less than 9% of the India’s oversea’s trade. Ship building is seen to act as a catalyst to overall growth as it has enormous job potential. In China which builds over 900 vessels has made a transformation on the job front. Vice Adm. S. K. K. Krishnan, former

Chairman of Mazagaon Dock and Independent Director of Cochin Shipyard recommends that since Indian ship- yards lack orders they should concentrate on building smaller vessels, especially the high technology offshore vessels as well as vessels for the dredging industry. “Gov- ernment of India should go out of their way to deepen the approach channels of the major ports, which in turn will give a fi llip to the dredging industry,” he said.” Unless more orders come up for ship building, the industry can- not expect to grow. Unless the government ensures that more Indian built ships operate in the Indian waters, noth- ing positive can happen.”

With renewed focus on cost, ship owners can make the most of their existing tonnage through upgrades, retrofi t and conversions. Akshay Jain, CEO of Vedam Design ad- vocates a pragmatic and effective approach towards ship repairs, at the same time cautions that instead of directly going for repairs work it is better to undertake a survey of the ship to identify fi rst the extent of the repairs to be under taken. “More importantly carefully select the ship repair yard and make a comparison of the cost, capability and the technical advantages.” He suggests that all op- tions for retrofi tting and ship conversions should be con- sidered in detail as they offer opportunities for bringing in good returns to the ship owner. By taking the time to gain in-depth knowledge of the customer’s needs, one can ensure optimal vessel performance by upgrading the right hardware and software systems. “India’s trade has tripled in the last 10 years,” points out Capt Kapil Kekre, Advisor – Commercial to the In- dian National Shipowners’ Association (INSA). “Unfor- tunately, Indian ships carry less than 9% of India’s inter- national cargo and there is lot of scope for growth with the government’s support. There is tremendous scope to build up tonnage especially to carry crude oil. Our own need for oil transportation over longer distances exists unlike other countries. Advance planning of voyages for carry- ing crude oil will help both the ship owners as well as the consumers. Thus, there is good opportunity for oil trans- portation that needs to be planned in advance and India should not lose out on this opportunity.”

India is the fourth largest steel producer in the world and is expected to climb to the second place soon. CRISIL

Research estimates domestic steel demand growth at 6-7 per cent CAGR between 2013-14 and 2017-18 compared with around 9 per cent CAGR over the last decade. This rate of increase will see steel demand in India touching 93- 94 million tonnes by 2017-18. Since incremental demand for fi nished steel is expected to be considerably lower the demand-supply gap will widen, when majority of the planned capacities are scheduled to be commissioned (16 million tonnes in 2013-14 and 8 million tonnes in 2015- 16). “The steel industry is facing raw material and water scarcity,” informed P. Raychaudhury, Executive Director of Steel Authority of India. “Land issues, environmental protection etc., could pose a problem. Besides, coking coal available in India is not suitable for steel production.

The demand is expected to go up by 2025 – 26, factor- ing an average GDP growth of 7%. But these are issues of little consequence considering the immense potential steel offers to the Indian shipping. A turnaround is not im- possible and very much in the hands of stakeholders if they play the cards right.

There’s been a new twist to the Jones Act.

Money crunchers are making a huge profi t from the artifi cial market in the domestic oil trade. ExxonMobil has chartered the Over- seas Cascade at $110,000 a day, almost 50 percent higher for the same ship a few months ago. Meanwhile one of the Koch brothers has scored big off the same oil company by relet- ting the American Phoenix for $100,000 a day, more than double the rate Koch Industries is paying for the ship. The cause is of course the booming oil shale industry (fracking) and the 50 or so U.S.-fl agged tankers that can carry the oil between U.S. ports. The boom in tanker rates bears out the predictions of some ana- lysts, who have been saying for years that pro- tecting the industry has led to the opposite of what was originally intended – less competi- tion instead of more. Alarms and warnings are spreading about the need to change all legis- lation relating to U.S.-fl ag shipping. Richard

Bank, who was at one time a senior offi cial in the State Department’s Offi ce of Maritime Af- fairs and now runs a consulting fi rm, reckons that the principle of protecting the U.S. Mer- chant Marine is not being maintained. In a re- cent interview with Forbes, he said that opera- tors such as APL have been swallowed up by foreign corporations, while others have with- ered and died. He gave three reasons – high operating costs, bureaucracy and regulations, and unhelpful trade unions.

Meanwhile merchant shipping subsidies and the like, particularly the food aid program, are going to foreign-owned ships [Maersk is the best-known of these in the industry] con- veniently fl agged in the U.S. In theory, these ships have to be made available to the govern- ment or navy in emergencies, but Bank says a government of the owning company (e.g. Den- mark with Maersk) could prohibit the vessel being used in a war zone.

Jones Act supporters say, with some justifi - cation, that it’s needed for military operations and also supports thousands of jobs. Oppo- nents say that those jobs are becoming an ex- pensive luxury and that even more jobs would be created if the law is loosened.

Professional App for iPhone, Android and

When you leave the page and head to the screen, Maritime Reporter’s family of online offerings provides the most digital and online news portals for news & insight. Here are select stories from last month on MaritimeProfessional.com 8 Maritime Reporter & Engineering News • JANUARY 2014