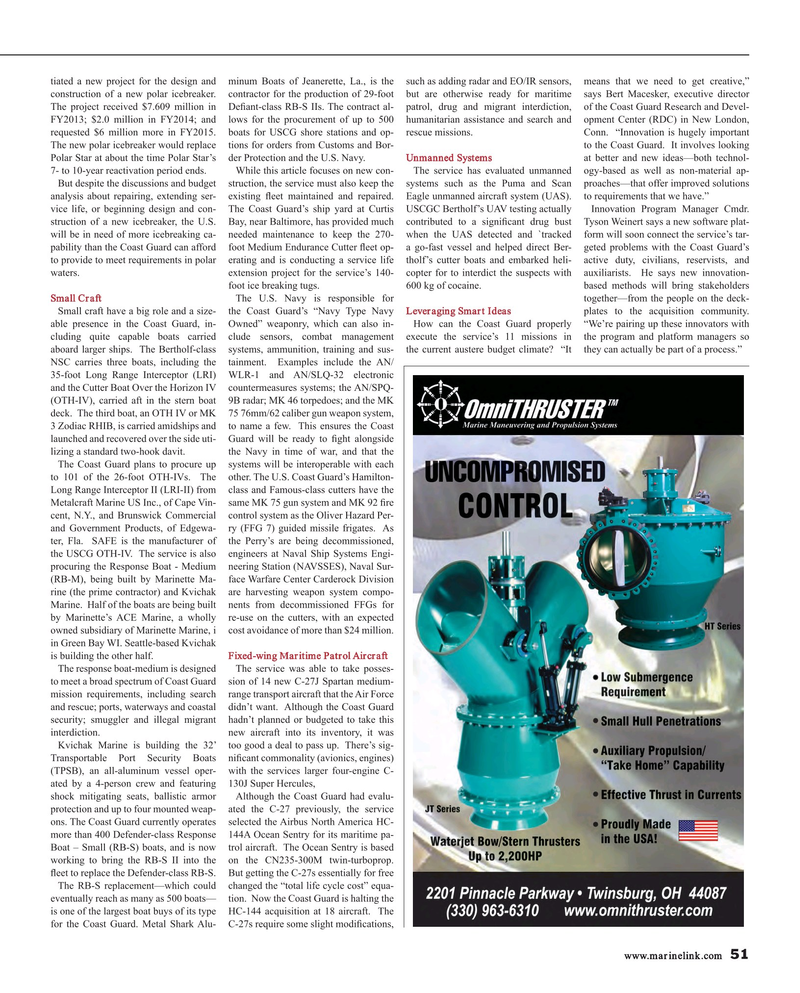 tiated a new project for the design and minum Boats of Jeanerette, La., is the such as adding radar and EO/IR sensors, means that we need to get creative,” construction of a new polar icebreaker. contractor for the production of 29-foot but are otherwise ready for maritime says Bert Macesker, executive director

FY2013; $2.0 million in FY2014; and lows for the procurement of up to 500 humanitarian assistance and search and opment Center (RDC) in New London, requested $6 million more in FY2015. boats for USCG shore stations and op- rescue missions. Conn. “Innovation is hugely important

The new polar icebreaker would replace tions for orders from Customs and Bor- to the Coast Guard. It involves looking

Polar Star at about the time Polar Star’s der Protection and the U.S. Navy. Unmanned Systems at better and new ideas—both technol- 7- to 10-year reactivation period ends. While this article focuses on new con- The service has evaluated unmanned ogy-based as well as non-material ap-

But despite the discussions and budget struction, the service must also keep the systems such as the Puma and Scan proaches—that offer improved solutions analysis about repairing, extending ser- existing ? eet maintained and repaired. Eagle unmanned aircraft system (UAS). to requirements that we have.” vice life, or beginning design and con- The Coast Guard’s ship yard at Curtis USCGC Bertholf’s UAV testing actually Innovation Program Manager Cmdr. struction of a new icebreaker, the U.S. Bay, near Baltimore, has provided much contributed to a signi? cant drug bust Tyson Weinert says a new software plat- will be in need of more icebreaking ca- needed maintenance to keep the 270- when the UAS detected and `tracked form will soon connect the service’s tar- pability than the Coast Guard can afford foot Medium Endurance Cutter ? eet op- a go-fast vessel and helped direct Ber- geted problems with the Coast Guard’s to provide to meet requirements in polar erating and is conducting a service life tholf’s cutter boats and embarked heli- active duty, civilians, reservists, and waters. extension project for the service’s 140- copter for to interdict the suspects with auxiliarists. He says new innovation- foot ice breaking tugs. 600 kg of cocaine. based methods will bring stakeholders

Small Craft The U.S. Navy is responsible for together—from the people on the deck-

Small craft have a big role and a size- the Coast Guard’s “Navy Type Navy Leveraging Smart Ideas plates to the acquisition community. able presence in the Coast Guard, in- Owned” weaponry, which can also in- How can the Coast Guard properly “We’re pairing up these innovators with cluding quite capable boats carried clude sensors, combat management execute the service’s 11 missions in the program and platform managers so aboard larger ships. The Bertholf-class systems, ammunition, training and sus- the current austere budget climate? “It they can actually be part of a process.”

NSC carries three boats, including the tainment. Examples include the AN/ 35-foot Long Range Interceptor (LRI) WLR-1 and AN/SLQ-32 electronic and the Cutter Boat Over the Horizon IV countermeasures systems; the AN/SPQ- (OTH-IV), carried aft in the stern boat 9B radar; MK 46 torpedoes; and the MK deck. The third boat, an OTH IV or MK 75 76mm/62 caliber gun weapon system, 3 Zodiac RHIB, is carried amidships and to name a few. This ensures the Coast launched and recovered over the side uti- Guard will be ready to ? ght alongside lizing a standard two-hook davit. the Navy in time of war, and that the

The Coast Guard plans to procure up systems will be interoperable with each to 101 of the 26-foot OTH-IVs. The other. The U.S. Coast Guard’s Hamilton-

Marine. Half of the boats are being built nents from decommissioned FFGs for by Marinette’s ACE Marine, a wholly re-use on the cutters, with an expected owned subsidiary of Marinette Marine, i cost avoidance of more than $24 million.

in Green Bay WI. Seattle-based Kvichak is building the other half. Fixed-wing Maritime Patrol Aircraft

The response boat-medium is designed The service was able to take posses- to meet a broad spectrum of Coast Guard sion of 14 new C-27J Spartan medium- mission requirements, including search range transport aircraft that the Air Force and rescue; ports, waterways and coastal didn’t want. Although the Coast Guard security; smuggler and illegal migrant hadn’t planned or budgeted to take this interdiction. new aircraft into its inventory, it was

Kvichak Marine is building the 32’ too good a deal to pass up. There’s sig-

Boat – Small (RB-S) boats, and is now trol aircraft. The Ocean Sentry is based working to bring the RB-S II into the on the CN235-300M twin-turboprop. ? eet to replace the Defender-class RB-S. But getting the C-27s essentially for free

The RB-S replacement—which could changed the “total life cycle cost” equa- eventually reach as many as 500 boats— tion. Now the Coast Guard is halting the is one of the largest boat buys of its type HC-144 acquisition at 18 aircraft. The for the Coast Guard. Metal Shark Alu- C-27s require some slight modi? cations, www.marinelink.com 51