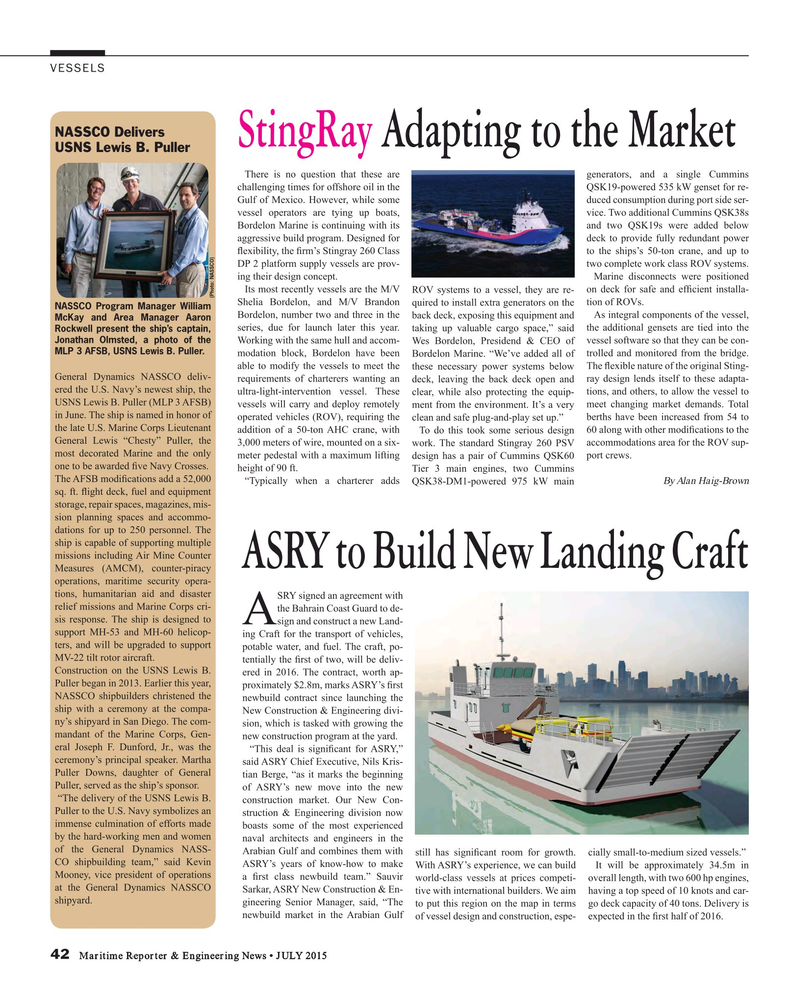 StingRay Adapting to the Market

There is no question that these are generators, and a single Cummins challenging times for offshore oil in the QSK19-powered 535 kW genset for re-

Gulf of Mexico. However, while some duced consumption during port side ser- vessel operators are tying up boats, vice. Two additional Cummins QSK38s

Bordelon Marine is continuing with its and two QSK19s were added below aggressive build program. Designed for deck to provide fully redundant power ? exibility, the ? rm’s Stingray 260 Class to the ships’s 50-ton crane, and up to

Its most recently vessels are the M/V ROV systems to a vessel, they are re- on deck for safe and ef? cient installa- (Photo: NASSCO)

Shelia Bordelon, and M/V Brandon quired to install extra generators on the tion of ROVs.

Bordelon, number two and three in the back deck, exposing this equipment and As integral components of the vessel,

McKay and Area Manager Aaron series, due for launch later this year. taking up valuable cargo space,” said the additional gensets are tied into the

Jonathan Olmsted, a photo of the

Working with the same hull and accom- Wes Bordelon, Presidend & CEO of vessel software so that they can be con-

MLP 3 AFSB, USNS Lewis B. Puller. modation block, Bordelon have been Bordelon Marine. “We’ve added all of trolled and monitored from the bridge. able to modify the vessels to meet the these necessary power systems below The ? exible nature of the original Sting-

General Dynamics NASSCO deliv- requirements of charterers wanting an deck, leaving the back deck open and ray design lends itself to these adapta- ered the U.S. Navy’s newest ship, the ultra-light-intervention vessel. These clear, while also protecting the equip- tions, and others, to allow the vessel to

USNS Lewis B. Puller (MLP 3 AFSB) vessels will carry and deploy remotely ment from the environment. It’s a very meet changing market demands. Total in June. The ship is named in honor of operated vehicles (ROV), requiring the clean and safe plug-and-play set up.” berths have been increased from 54 to the late U.S. Marine Corps Lieutenant addition of a 50-ton AHC crane, with To do this took some serious design 60 along with other modi? cations to the

General Lewis “Chesty” Puller, the 3,000 meters of wire, mounted on a six- work. The standard Stingray 260 PSV accommodations area for the ROV sup- most decorated Marine and the only meter pedestal with a maximum lifting design has a pair of Cummins QSK60 port crews. one to be awarded ? ve Navy Crosses.

SRY signed an agreement with relief missions and Marine Corps cri- the Bahrain Coast Guard to de- sis response. The ship is designed to

Asign and construct a new Land- support MH-53 and MH-60 helicop- ing Craft for the transport of vehicles, ters, and will be upgraded to support potable water, and fuel. The craft, po-

tentially the ? rst of two, will be deliv-

Construction on the USNS Lewis B. ered in 2016. The contract, worth ap-

New Construction & Engineering divi- ny’s shipyard in San Diego. The com- sion, which is tasked with growing the mandant of the Marine Corps, Gen- new construction program at the yard.

Puller Downs, daughter of General tian Berge, “as it marks the beginning

Puller, served as the ship’s sponsor.

of ASRY’s new move into the new “The delivery of the USNS Lewis B. construction market. Our New Con-

Puller to the U.S. Navy symbolizes an struction & Engineering division now immense culmination of efforts made boasts some of the most experienced by the hard-working men and women naval architects and engineers in the of the General Dynamics NASS-

ASRY’s years of know-how to make With ASRY’s experience, we can build It will be approximately 34.5m in

Sarkar, ASRY New Construction & En- tive with international builders. We aim having a top speed of 10 knots and car- shipyard. gineering Senior Manager, said, “The to put this region on the map in terms go deck capacity of 40 tons. Delivery is newbuild market in the Arabian Gulf of vessel design and construction, espe- expected in the ? rst half of 2016. 42 Maritime Reporter & Engineering News • JULY 2015