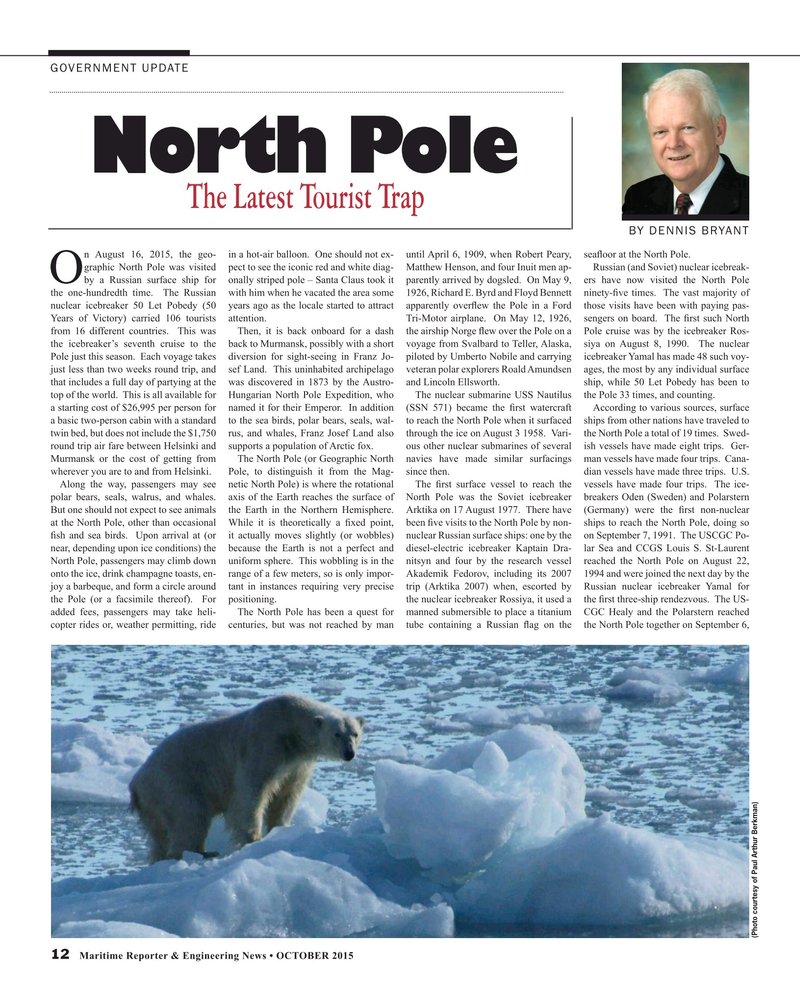 BY DENNIS BRYANT n August 16, 2015, the geo- in a hot-air balloon. One should not ex- until April 6, 1909, when Robert Peary, sea? oor at the North Pole. graphic North Pole was visited pect to see the iconic red and white diag- Matthew Henson, and four Inuit men ap- Russian (and Soviet) nuclear icebreak-

Oby a Russian surface ship for onally striped pole – Santa Claus took it parently arrived by dogsled. On May 9, ers have now visited the North Pole the one-hundredth time. The Russian with him when he vacated the area some 1926, Richard E. Byrd and Floyd Bennett ninety-? ve times. The vast majority of nuclear icebreaker 50 Let Pobedy (50 years ago as the locale started to attract apparently over? ew the Pole in a Ford those visits have been with paying pas-

Years of Victory) carried 106 tourists attention. Tri-Motor airplane. On May 12, 1926, sengers on board. The ? rst such North from 16 different countries. This was Then, it is back onboard for a dash the airship Norge ? ew over the Pole on a Pole cruise was by the icebreaker Ros- the icebreaker’s seventh cruise to the back to Murmansk, possibly with a short voyage from Svalbard to Teller, Alaska, siya on August 8, 1990. The nuclear

Pole just this season. Each voyage takes diversion for sight-seeing in Franz Jo- piloted by Umberto Nobile and carrying icebreaker Yamal has made 48 such voy- just less than two weeks round trip, and sef Land. This uninhabited archipelago veteran polar explorers Roald Amundsen ages, the most by any individual surface that includes a full day of partying at the was discovered in 1873 by the Austro- and Lincoln Ellsworth. ship, while 50 Let Pobedy has been to top of the world. This is all available for Hungarian North Pole Expedition, who The nuclear submarine USS Nautilus the Pole 33 times, and counting. a starting cost of $26,995 per person for named it for their Emperor. In addition (SSN 571) became the ? rst watercraft According to various sources, surface a basic two-person cabin with a standard to the sea birds, polar bears, seals, wal- to reach the North Pole when it surfaced ships from other nations have traveled to twin bed, but does not include the $1,750 rus, and whales, Franz Josef Land also through the ice on August 3 1958. Vari- the North Pole a total of 19 times. Swed- round trip air fare between Helsinki and supports a population of Arctic fox. ous other nuclear submarines of several ish vessels have made eight trips. Ger-

Along the way, passengers may see netic North Pole) is where the rotational The ? rst surface vessel to reach the vessels have made four trips. The ice- polar bears, seals, walrus, and whales. axis of the Earth reaches the surface of North Pole was the Soviet icebreaker breakers Oden (Sweden) and Polarstern

But one should not expect to see animals the Earth in the Northern Hemisphere. Arktika on 17 August 1977. There have (Germany) were the ? rst non-nuclear at the North Pole, other than occasional While it is theoretically a ? xed point, been ? ve visits to the North Pole by non- ships to reach the North Pole, doing so ? sh and sea birds. Upon arrival at (or it actually moves slightly (or wobbles) nuclear Russian surface ships: one by the on September 7, 1991. The USCGC Po- near, depending upon ice conditions) the because the Earth is not a perfect and diesel-electric icebreaker Kaptain Dra- lar Sea and CCGS Louis S. St-Laurent

North Pole, passengers may climb down uniform sphere. This wobbling is in the nitsyn and four by the research vessel reached the North Pole on August 22, onto the ice, drink champagne toasts, en- range of a few meters, so is only impor- Akademik Fedorov, including its 2007 1994 and were joined the next day by the joy a barbeque, and form a circle around tant in instances requiring very precise trip (Arktika 2007) when, escorted by Russian nuclear icebreaker Yamal for the Pole (or a facsimile thereof). For positioning. the nuclear icebreaker Rossiya, it used a the ? rst three-ship rendezvous. The US- added fees, passengers may take heli- The North Pole has been a quest for manned submersible to place a titanium CGC Healy and the Polarstern reached copter rides or, weather permitting, ride centuries, but was not reached by man tube containing a Russian ? ag on the the North Pole together on September 6, (Photo courtesy of Paul Arthur Berkman) 12 Maritime Reporter & Engineering News • OCTOBER 2015