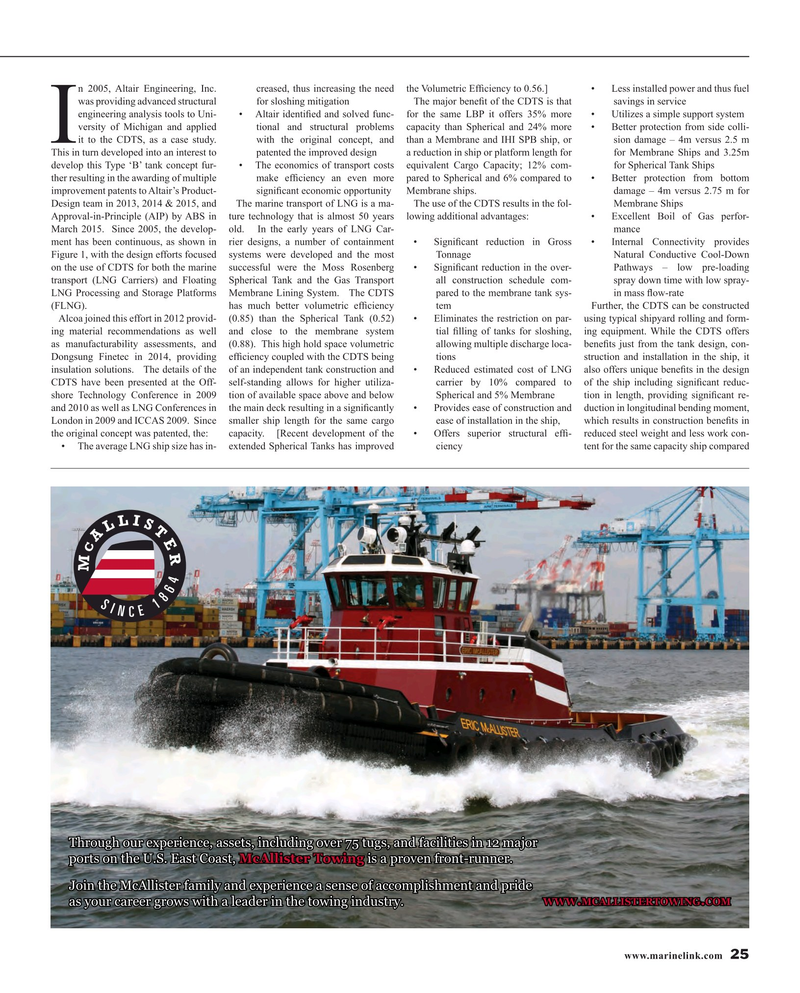 n 2005, Altair Engineering, Inc. creased, thus increasing the need the Volumetric Ef? ciency to 0.56.] • Less installed power and thus fuel was providing advanced structural for sloshing mitigation The major bene? t of the CDTS is that savings in service engineering analysis tools to Uni- • Altair identi? ed and solved func- for the same LBP it offers 35% more • Utilizes a simple support system versity of Michigan and applied tional and structural problems capacity than Spherical and 24% more • Better protection from side colli-

Iit to the CDTS, as a case study. with the original concept, and than a Membrane and IHI SPB ship, or sion damage – 4m versus 2.5 m

This in turn developed into an interest to patented the improved design a reduction in ship or platform length for for Membrane Ships and 3.25m develop this Type ‘B’ tank concept fur- • The economics of transport costs equivalent Cargo Capacity; 12% com- for Spherical Tank Ships ther resulting in the awarding of multiple make ef? ciency an even more pared to Spherical and 6% compared to • Better protection from bottom improvement patents to Altair’s Product- signi? cant economic opportunity Membrane ships. damage – 4m versus 2.75 m for

March 2015. Since 2005, the develop- old. In the early years of LNG Car- mance ment has been continuous, as shown in rier designs, a number of containment • Signi? cant reduction in Gross • Internal Connectivity provides

Figure 1, with the design efforts focused systems were developed and the most Tonnage Natural Conductive Cool-Down on the use of CDTS for both the marine successful were the Moss Rosenberg • Signi? cant reduction in the over- Pathways – low pre-loading transport (LNG Carriers) and Floating Spherical Tank and the Gas Transport all construction schedule com- spray down time with low spray-

LNG Processing and Storage Platforms Membrane Lining System. The CDTS pared to the membrane tank sys- in mass ? ow-rate (FLNG). has much better volumetric ef? ciency tem Further, the CDTS can be constructed

Alcoa joined this effort in 2012 provid- (0.85) than the Spherical Tank (0.52) • Eliminates the restriction on par- using typical shipyard rolling and form- ing material recommendations as well and close to the membrane system tial ? lling of tanks for sloshing, ing equipment. While the CDTS offers as manufacturability assessments, and (0.88). This high hold space volumetric allowing multiple discharge loca- bene? ts just from the tank design, con-

Dongsung Finetec in 2014, providing ef? ciency coupled with the CDTS being tions struction and installation in the ship, it insulation solutions. The details of the of an independent tank construction and • Reduced estimated cost of LNG also offers unique bene? ts in the design

CDTS have been presented at the Off- self-standing allows for higher utiliza- carrier by 10% compared to of the ship including signi? cant reduc- shore Technology Conference in 2009 tion of available space above and below Spherical and 5% Membrane tion in length, providing signi? cant re- and 2010 as well as LNG Conferences in the main deck resulting in a signi? cantly • Provides ease of construction and duction in longitudinal bending moment,

London in 2009 and ICCAS 2009. Since smaller ship length for the same cargo ease of installation in the ship, which results in construction bene? ts in the original concept was patented, the: capacity. [Recent development of the • Offers superior structural ef? - reduced steel weight and less work con- • The average LNG ship size has in- extended Spherical Tanks has improved ciency tent for the same capacity ship compared

Through our experience, assets, including over 75 tugs, and facilities in 12 major ports on the U.S. East Coast, McAllister Towing is a proven front-runner.

as your career grows with a leader in the towing industry.