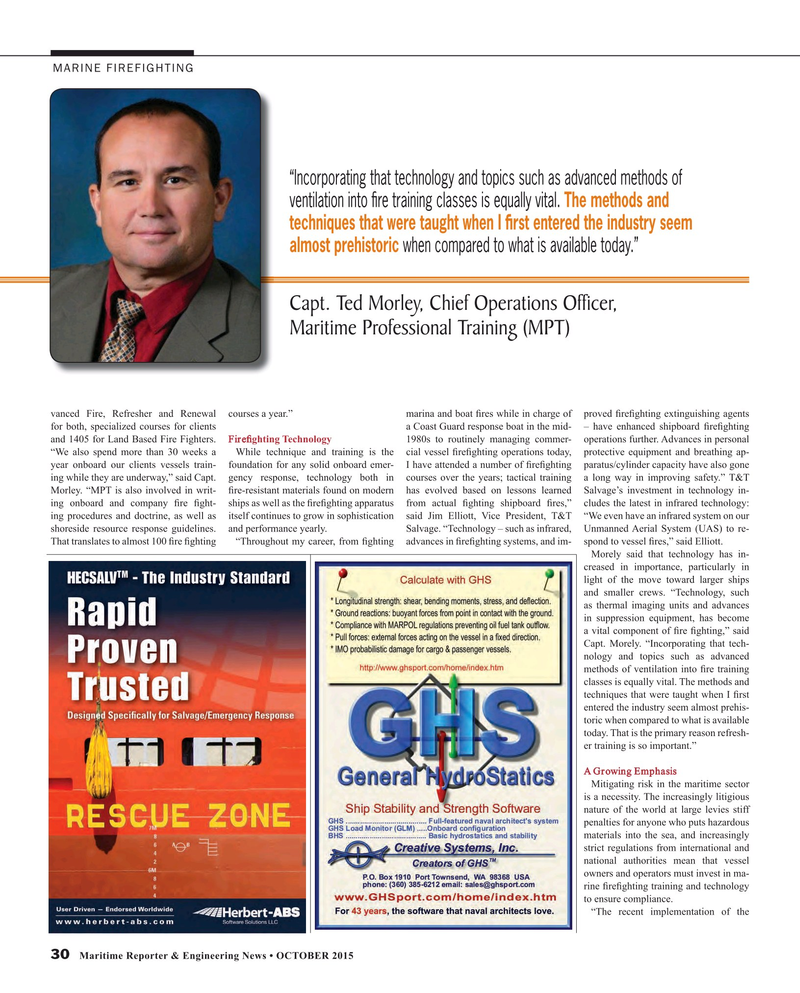 MARINE FIREFIGHTING “Incorporating that technology and topics such as advanced methods of ventilation into ? re training classes is equally vital. The methods and techniques that were taught when I ? rst entered the industry seem almost prehistoric when compared to what is available today.”

Maritime Professional Training (MPT) vanced Fire, Refresher and Renewal courses a year.” marina and boat ? res while in charge of proved ? re? ghting extinguishing agents for both, specialized courses for clients a Coast Guard response boat in the mid- – have enhanced shipboard ? re? ghting and 1405 for Land Based Fire Fighters. Fire? ghting Technology 1980s to routinely managing commer- operations further. Advances in personal “We also spend more than 30 weeks a While technique and training is the cial vessel ? re? ghting operations today, protective equipment and breathing ap- year onboard our clients vessels train- foundation for any solid onboard emer- I have attended a number of ? re? ghting paratus/cylinder capacity have also gone ing while they are underway,” said Capt. gency response, technology both in courses over the years; tactical training a long way in improving safety.” T&T

Morley. “MPT is also involved in writ- ? re-resistant materials found on modern has evolved based on lessons learned Salvage’s investment in technology in- ing onboard and company ? re ? ght- ships as well as the ? re? ghting apparatus from actual ? ghting shipboard ? res,” cludes the latest in infrared technology: ing procedures and doctrine, as well as itself continues to grow in sophistication said Jim Elliott, Vice President, T&T “We even have an infrared system on our shoreside resource response guidelines. and performance yearly. Salvage. “Technology – such as infrared, Unmanned Aerial System (UAS) to re-

That translates to almost 100 ? re ? ghting “Throughout my career, from ? ghting advances in ? re? ghting systems, and im- spond to vessel ? res,” said Elliott.

Morely said that technology has in- creased in importance, particularly in light of the move toward larger ships and smaller crews. “Technology, such as thermal imaging units and advances in suppression equipment, has become a vital component of ? re ? ghting,” said

Capt. Morely. “Incorporating that tech- nology and topics such as advanced methods of ventilation into ? re training classes is equally vital. The methods and techniques that were taught when I ? rst entered the industry seem almost prehis- toric when compared to what is available today. That is the primary reason refresh- er training is so important.”

Mitigating risk in the maritime sector is a necessity. The increasingly litigious nature of the world at large levies stiff penalties for anyone who puts hazardous materials into the sea, and increasingly strict regulations from international and national authorities mean that vessel owners and operators must invest in ma- rine ? re? ghting training and technology to ensure compliance.