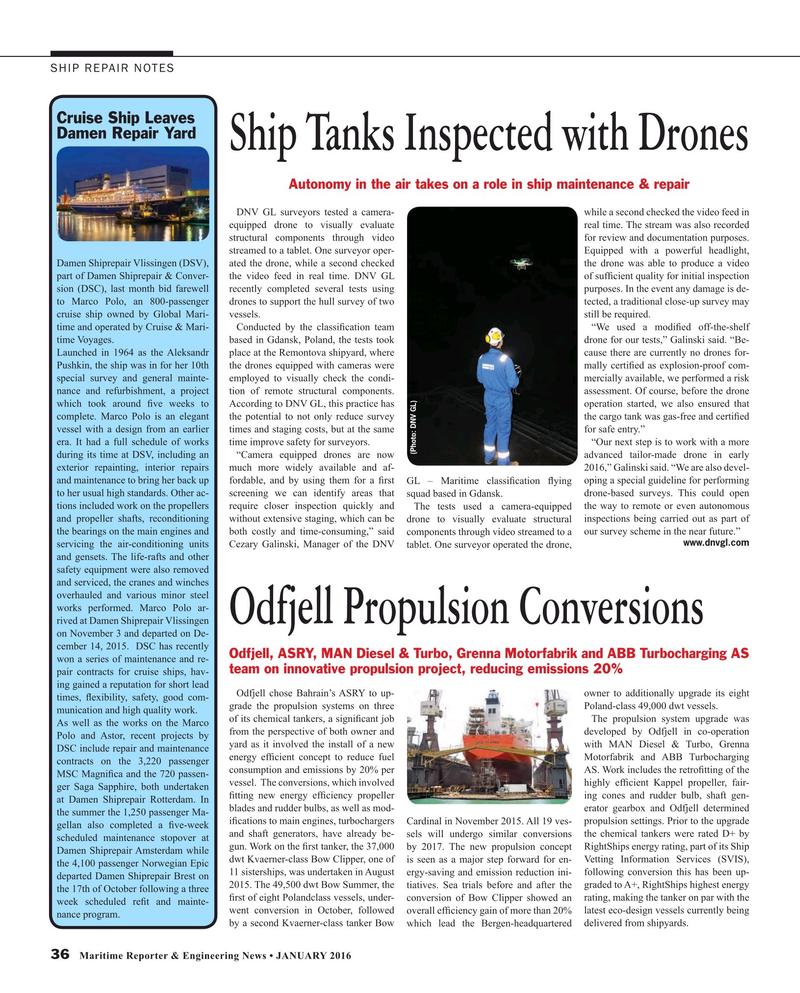 DNV GL surveyors tested a camera- while a second checked the video feed in equipped drone to visually evaluate real time. The stream was also recorded structural components through video for review and documentation purposes. streamed to a tablet. One surveyor oper- Equipped with a powerful headlight,

time and operated by Cruise & Mari- Conducted by the classi? cation team “We used a modi? ed off-the-shelf time Voyages. based in Gdansk, Poland, the tests took drone for our tests,” Galinski said. “Be-

Launched in 1964 as the Aleksandr place at the Remontova shipyard, where cause there are currently no drones for-

Pushkin, the ship was in for her 10th the drones equipped with cameras were mally certi? ed as explosion-proof com- special survey and general mainte- employed to visually check the condi- mercially available, we performed a risk nance and refurbishment, a project tion of remote structural components. assessment. Of course, before the drone which took around ? ve weeks to According to DNV GL, this practice has operation started, we also ensured that complete. Marco Polo is an elegant the potential to not only reduce survey the cargo tank was gas-free and certi? ed vessel with a design from an earlier times and staging costs, but at the same for safe entry.” era. It had a full schedule of works time improve safety for surveyors. “Our next step is to work with a more (Photo: DNV GL) during its time at DSV, including an “Camera equipped drones are now advanced tailor-made drone in early exterior repainting, interior repairs much more widely available and af- 2016,” Galinski said. “We are also devel- and maintenance to bring her back up fordable, and by using them for a ? rst GL – Maritime classi? cation ? ying oping a special guideline for performing to her usual high standards. Other ac- screening we can identify areas that squad based in Gdansk. drone-based surveys. This could open tions included work on the propellers require closer inspection quickly and The tests used a camera-equipped the way to remote or even autonomous and propeller shafts, reconditioning without extensive staging, which can be drone to visually evaluate structural inspections being carried out as part of the bearings on the main engines and both costly and time-consuming,” said components through video streamed to a our survey scheme in the near future.” www.dnvgl.com servicing the air-conditioning units Cezary Galinski, Manager of the DNV tablet. One surveyor operated the drone, and gensets. The life-rafts and other safety equipment were also removed and serviced, the cranes and winches overhauled and various minor steel works performed. Marco Polo ar-

Polo and Astor, recent projects by yard as it involved the install of a new with MAN Diesel & Turbo, Grenna

DSC include repair and maintenance energy ef? cient concept to reduce fuel Motorfabrik and ABB Turbocharging contracts on the 3,220 passenger consumption and emissions by 20% per AS. Work includes the retro? tting of the

MSC Magni? ca and the 720 passen- vessel. The conversions, which involved highly ef? cient Kappel propeller, fair- ger Saga Sapphire, both undertaken ? tting new energy ef? ciency propeller ing cones and rudder bulb, shaft gen- at Damen Shiprepair Rotterdam. In blades and rudder bulbs, as well as mod- erator gearbox and Odfjell determined the summer the 1,250 passenger Ma- i? cations to main engines, turbochargers Cardinal in November 2015. All 19 ves- propulsion settings. Prior to the upgrade gellan also completed a ? ve-week and shaft generators, have already be- sels will undergo similar conversions the chemical tankers were rated D+ by scheduled maintenance stopover at gun. Work on the ? rst tanker, the 37,000 by 2017. The new propulsion concept RightShips energy rating, part of its Ship

Damen Shiprepair Amsterdam while dwt Kvaerner-class Bow Clipper, one of is seen as a major step forward for en- Vetting Information Services (SVIS), the 4,100 passenger Norwegian Epic 11 sisterships, was undertaken in August ergy-saving and emission reduction ini- following conversion this has been up- departed Damen Shiprepair Brest on 2015. The 49,500 dwt Bow Summer, the tiatives. Sea trials before and after the graded to A+, RightShips highest energy the 17th of October following a three ? rst of eight Polandclass vessels, under- conversion of Bow Clipper showed an rating, making the tanker on par with the week scheduled re? t and mainte- went conversion in October, followed overall ef? ciency gain of more than 20% latest eco-design vessels currently being nance program.

by a second Kvaerner-class tanker Bow which lead the Bergen-headquartered delivered from shipyards.