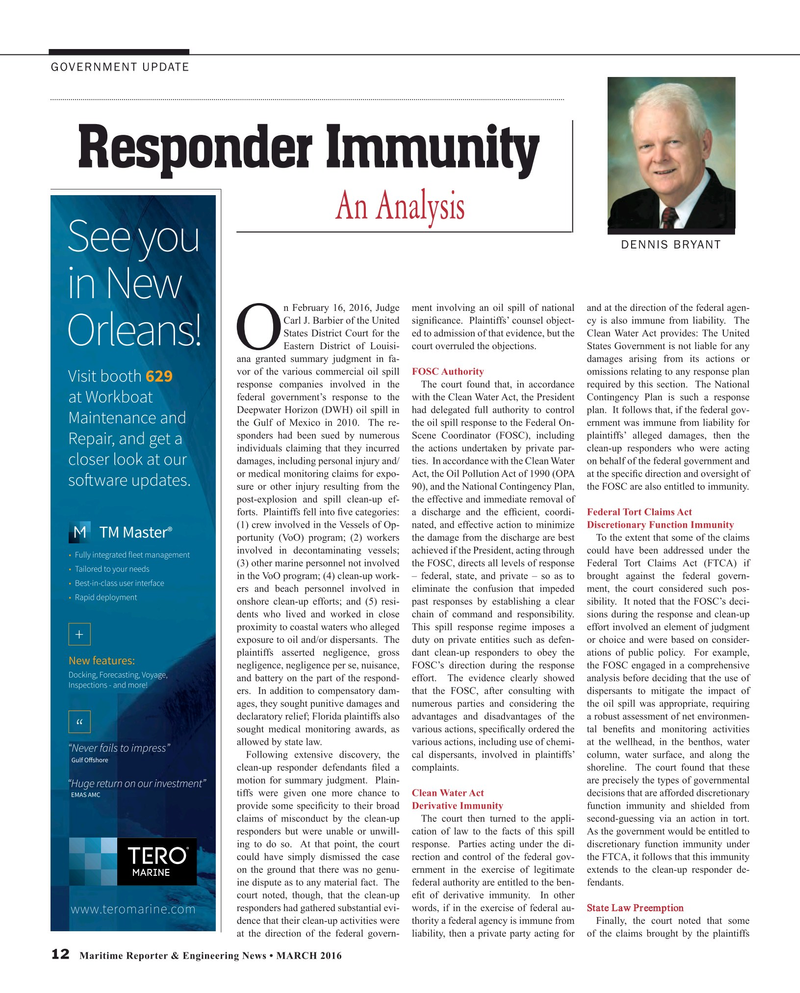 See you in New n February 16, 2016, Judge ment involving an oil spill of national and at the direction of the federal agen-

States District Court for the ed to admission of that evidence, but the Clean Water Act provides: The United

OEastern District of Louisi- court overruled the objections. States Government is not liable for any ana granted summary judgment in fa- damages arising from its actions or vor of the various commercial oil spill FOSC Authority omissions relating to any response plan

Visit booth 629 response companies involved in the The court found that, in accordance required by this section. The National federal government’s response to the with the Clean Water Act, the President Contingency Plan is such a response at Workboat

Deepwater Horizon (DWH) oil spill in had delegated full authority to control plan. It follows that, if the federal gov-

Maintenance and the Gulf of Mexico in 2010. The re- the oil spill response to the Federal On- ernment was immune from liability for sponders had been sued by numerous Scene Coordinator (FOSC), including plaintiffs’ alleged damages, then the

Repair, and get a individuals claiming that they incurred the actions undertaken by private par- clean-up responders who were acting damages, including personal injury and/ ties. In accordance with the Clean Water on behalf of the federal government and closer look at our or medical monitoring claims for expo- Act, the Oil Pollution Act of 1990 (OPA at the speci? c direction and oversight of 0,?4/"2-!1"0?

sure or other injury resulting from the 90), and the National Contingency Plan, the FOSC are also entitled to immunity. post-explosion and spill clean-up ef- the effective and immediate removal of forts. Plaintiffs fell into ? ve categories: a discharge and the ef? cient, coordi- Federal Tort Claims Act (1) crew involved in the Vessels of Op- nated, and effective action to minimize Discretionary Function Immunity ®

TM Master portunity (VoO) program; (2) workers the damage from the discharge are best To the extent that some of the claims involved in decontaminating vessels; achieved if the President, acting through could have been addressed under the • 2))6&+1"$/1"!?""1*+$"*"+1 (3) other marine personnel not involved the FOSC, directs all levels of response Federal Tort Claims Act (FTCA) if • Tailored to your needs in the VoO program; (4) clean-up work- – federal, state, and private – so as to brought against the federal govern- • Best-in-class user interface ers and beach personnel involved in eliminate the confusion that impeded ment, the court considered such pos- •-&!!"-),6*"+1 onshore clean-up efforts; and (5) resi- past responses by establishing a clear sibility. It noted that the FOSC’s deci- dents who lived and worked in close chain of command and responsibility. sions during the response and clean-up proximity to coastal waters who alleged This spill response regime imposes a effort involved an element of judgment + exposure to oil and/or dispersants. The duty on private entities such as defen- or choice and were based on consider- plaintiffs asserted negligence, gross dant clean-up responders to obey the ations of public policy. For example,

New features: negligence, negligence per se, nuisance, FOSC’s direction during the response the FOSC engaged in a comprehensive

Docking, Forecasting, Voyage, and battery on the part of the respond- effort. The evidence clearly showed analysis before deciding that the use of +0-" 1&,+0?+!*,/"?

ers. In addition to compensatory dam- that the FOSC, after consulting with dispersants to mitigate the impact of ages, they sought punitive damages and numerous parties and considering the the oil spill was appropriate, requiring declaratory relief; Florida plaintiffs also advantages and disadvantages of the a robust assessment of net environmen- sought medical monitoring awards, as various actions, speci? cally ordered the tal bene? ts and monitoring activities allowed by state law. various actions, including use of chemi- at the wellhead, in the benthos, water “Never fails to impress”

Following extensive discovery, the cal dispersants, involved in plaintiffs’ column, water surface, and along the 2)#?0%,/" clean-up responder defendants ? led a complaints. shoreline. The court found that these motion for summary judgment. Plain- are precisely the types of governmental “Huge return on our investment” tiffs were given one more chance to Clean Water Act decisions that are afforded discretionary

EMAS AMC provide some speci? city to their broad Derivative Immunity function immunity and shielded from claims of misconduct by the clean-up The court then turned to the appli- second-guessing via an action in tort. responders but were unable or unwill- cation of law to the facts of this spill As the government would be entitled to ing to do so. At that point, the court response. Parties acting under the di- discretionary function immunity under could have simply dismissed the case rection and control of the federal gov- the FTCA, it follows that this immunity on the ground that there was no genu- ernment in the exercise of legitimate extends to the clean-up responder de- ine dispute as to any material fact. The federal authority are entitled to the ben- fendants. court noted, though, that the clean-up e? t of derivative immunity. In other responders had gathered substantial evi- words, if in the exercise of federal au- State Law Preemption www.teromarine.com dence that their clean-up activities were thority a federal agency is immune from Finally, the court noted that some at the direction of the federal govern- liability, then a private party acting for of the claims brought by the plaintiffs 12 Maritime Reporter & Engineering News • MARCH 2016