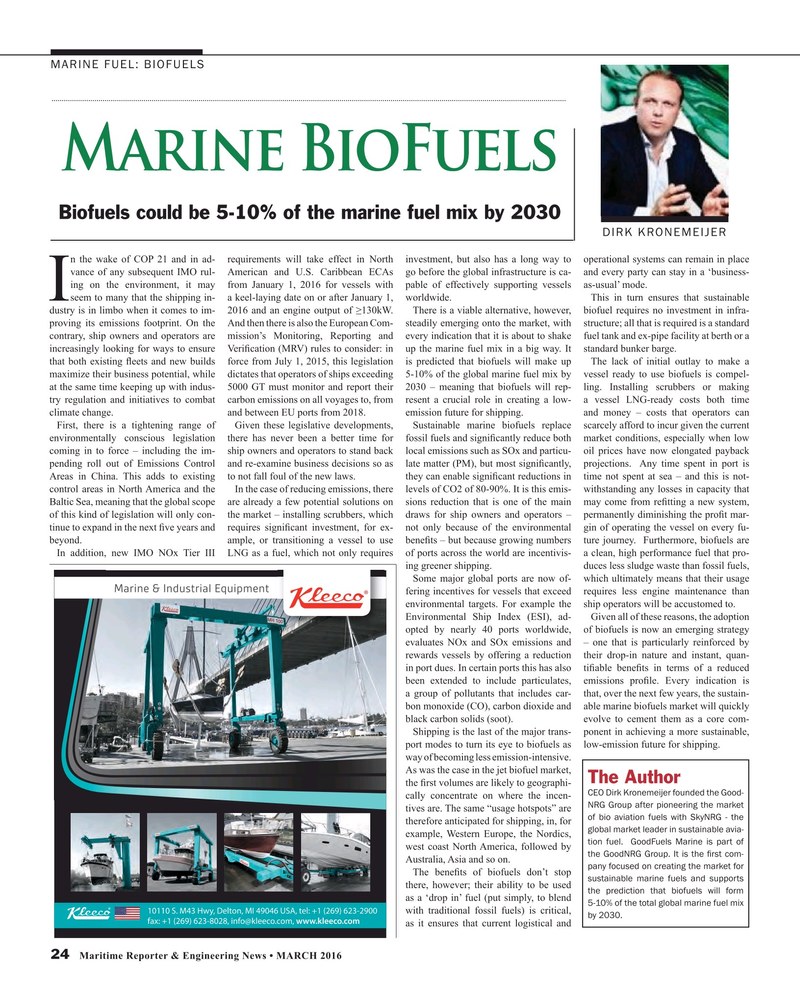 DIRK KRONEMEIJER n the wake of COP 21 and in ad- requirements will take effect in North investment, but also has a long way to operational systems can remain in place vance of any subsequent IMO rul- American and U.S. Caribbean ECAs go before the global infrastructure is ca- and every party can stay in a ‘business- ing on the environment, it may from January 1, 2016 for vessels with pable of effectively supporting vessels as-usual’ mode.

Iseem to many that the shipping in- a keel-laying date on or after January 1, worldwide. This in turn ensures that sustainable dustry is in limbo when it comes to im- 2016 and an engine output of =130kW. There is a viable alternative, however, biofuel requires no investment in infra- proving its emissions footprint. On the And then there is also the European Com- steadily emerging onto the market, with structure; all that is required is a standard contrary, ship owners and operators are mission’s Monitoring, Reporting and every indication that it is about to shake fuel tank and ex-pipe facility at berth or a increasingly looking for ways to ensure Veri? cation (MRV) rules to consider: in up the marine fuel mix in a big way. It standard bunker barge. that both existing ? eets and new builds force from July 1, 2015, this legislation is predicted that biofuels will make up The lack of initial outlay to make a maximize their business potential, while dictates that operators of ships exceeding 5-10% of the global marine fuel mix by vessel ready to use biofuels is compel- at the same time keeping up with indus- 5000 GT must monitor and report their 2030 – meaning that biofuels will rep- ling. Installing scrubbers or making try regulation and initiatives to combat carbon emissions on all voyages to, from resent a crucial role in creating a low- a vessel LNG-ready costs both time climate change. and between EU ports from 2018. emission future for shipping. and money – costs that operators can

First, there is a tightening range of Given these legislative developments, Sustainable marine biofuels replace scarcely afford to incur given the current environmentally conscious legislation there has never been a better time for fossil fuels and signi? cantly reduce both market conditions, especially when low coming in to force – including the im- ship owners and operators to stand back local emissions such as SOx and particu- oil prices have now elongated payback pending roll out of Emissions Control and re-examine business decisions so as late matter (PM), but most signi? cantly, projections. Any time spent in port is

Areas in China. This adds to existing to not fall foul of the new laws. they can enable signi? cant reductions in time not spent at sea – and this is not- control areas in North America and the In the case of reducing emissions, there levels of CO2 of 80-90%. It is this emis- withstanding any losses in capacity that

Baltic Sea, meaning that the global scope are already a few potential solutions on sions reduction that is one of the main may come from re? tting a new system, of this kind of legislation will only con- the market – installing scrubbers, which draws for ship owners and operators – permanently diminishing the pro? t mar- tinue to expand in the next ? ve years and requires signi? cant investment, for ex- not only because of the environmental gin of operating the vessel on every fu- beyond. ample, or transitioning a vessel to use bene? ts – but because growing numbers ture journey. Furthermore, biofuels are

In addition, new IMO NOx Tier III LNG as a fuel, which not only requires of ports across the world are incentivis- a clean, high performance fuel that pro- ing greener shipping. duces less sludge waste than fossil fuels,

Marine & Industrial Equipment fering incentives for vessels that exceed requires less engine maintenance than ® environmental targets. For example the ship operators will be accustomed to.

Environmental Ship Index (ESI), ad- Given all of these reasons, the adoption opted by nearly 40 ports worldwide, of biofuels is now an emerging strategy evaluates NOx and SOx emissions and – one that is particularly reinforced by rewards vessels by offering a reduction their drop-in nature and instant, quan- in port dues. In certain ports this has also ti? able bene? ts in terms of a reduced been extended to include particulates, emissions pro? le. Every indication is a group of pollutants that includes car- that, over the next few years, the sustain- bon monoxide (CO), carbon dioxide and able marine biofuels market will quickly black carbon solids (soot). evolve to cement them as a core com-

Shipping is the last of the major trans- ponent in achieving a more sustainable, port modes to turn its eye to biofuels as low-emission future for shipping.

As was the case in the jet biofuel market,

The Author the ? rst volumes are likely to geographi-

NRG Group after pioneering the market tives are. The same “usage hotspots” are of bio aviation fuels with SkyNRG - the therefore anticipated for shipping, in, for global market leader in sustainable avia- example, Western Europe, the Nordics, tion fuel. GoodFuels Marine is part of west coast North America, followed by the GoodNRG Group. It is the ? rst com-

Australia, Asia and so on. pany focused on creating the market for