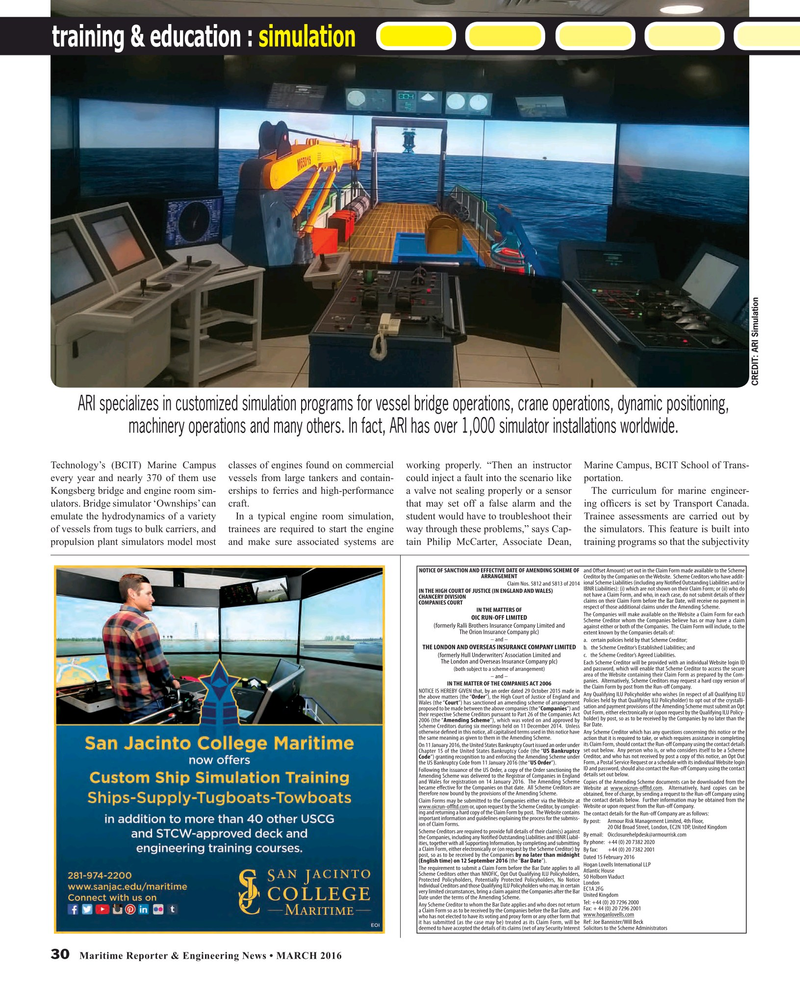 Technology’s (BCIT) Marine Campus classes of engines found on commercial working properly. “Then an instructor Marine Campus, BCIT School of Trans- every year and nearly 370 of them use vessels from large tankers and contain- could inject a fault into the scenario like portation.

Kongsberg bridge and engine room sim- erships to ferries and high-performance a valve not sealing properly or a sensor The curriculum for marine engineer- ulators. Bridge simulator ‘Ownships’ can craft. that may set off a false alarm and the ing of? cers is set by Transport Canada. emulate the hydrodynamics of a variety In a typical engine room simulation, student would have to troubleshoot their Trainee assessments are carried out by of vessels from tugs to bulk carriers, and trainees are required to start the engine way through these problems,” says Cap- the simulators. This feature is built into propulsion plant simulators model most and make sure associated systems are tain Philip McCarter, Associate Dean, training programs so that the subjectivity

ARRANGEMENT Creditor by the Com panies on the Website. Scheme Creditors who have addit -

Claim Nos. 5812 and 5813 of 2014 ional Scheme Liabilities (including any Notifed Out stand ing Liabilities and/or

IBNR Liabilities): (i) which are not shown on their Claim Form; or (ii) who do

IN THE HIGH COURT OF JUSTICE (IN ENGLAND AND WALES) not have a Claim Form, and who, in each case, do not submit details of their

CHANCERY DIVISION claims on their Claim Form before the Bar Date, will receive no pay ment in

COMPANIES COURT respect of those addit ional claims under the Amend ing Scheme.

IN THE MATTERS OF

Scheme Creditor whom the Com panies believe has or may have a claim (formerly Ralli Brothers Insurance Company Limited and against either or both of the Com panies. The Claim Form will include, to the

The Orion Insurance Company plc) extent known by the Com panies details of: – and – a. certain policies held by that Scheme Creditor;

Each Scheme Creditor will be provided with an individual Website login ID (both subject to a scheme of arrangement) and pass word, which will enable that Scheme Creditor to access the secure area of the Website contain ing their Claim Form as pre pared by the Com - – and – panies. Alter nativ ely, Scheme Creditors may request a hard copy version of

IN THE MATTER OF THE COMPANIES ACT 2006

NOTICE IS HEREBY GIVEN that, by an order dated 29 October 2015 made in the Claim Form by post from the Run-of Company.

the above matters (the “Order”), the High Court of Justice of England and Any Qualify ing ILU Policy holder who wishes (in respect of all Qualify ing ILU

Wales (the “Court”) has sanct ioned an amend ing scheme of arrange ment Policies held by that Qualify ing ILU Policy holder) to opt out of the crystalli - proposed to be made between the above com panies (the “Com panies”) and sation and payment provisions of the Amend ing Scheme must submit an Opt their respect ive Scheme Creditors pur suant to Part 26 of the Com panies Act Out Form, either elect ronic ally or (upon request by the Qualify ing ILU Policy - 2006 (the “Amend ing Scheme”), which was voted on and approved by holder) by post, so as to be received by the Com panies by no later than the

other wise defned in this notice, all capital ised terms used in this notice have Any Scheme Creditor which has any quest ions concern ing this notice or the the same mean ing as given to them in the Amending Scheme. action that it is required to take, or which requires assist ance in complet ing

On 11 January 2016, the United States Bank ruptcy Court issued an order under its Claim Form, should contact the Run-of Company using the contact details

Chapter 15 of the United States Bank ruptcy Code (the “US Bank ruptcy set out below. Any person who is, or who considers itself to be a Scheme

Code”) grant ing recog nition to and enforc ing the Amend ing Scheme under Creditor, and who has not received by post a copy of this notice, an Opt Out the US Bank ruptcy Code from 11 January 2016 (the “US Order”). Form, a Postal Service Request or a schedule with its individ ual Website login

Following the issuance of the US Order, a copy of the Order sanction ing the ID and pass word, should also contact the Run-of Com pany using the contact

Amend ing Scheme was delivered to the Registrar of Com panies in England details set out below.

Claim Forms may be sub mitted to the Com panies either via the Website at the contact details below. Further inform ation may be obtained from the www.oicrun-oftd.com or, upon request by the Scheme Creditor, by com plet - Website or upon request from the Run-of Company.

ing and return ing a hard copy of the Claim Form by post. The Website contains The contact details for the Run-of Company are as follows: import ant inform ation and guide lines explain ing the process for the sub miss - By post: Armour Risk Management Limited, 4th Floor, ion of Claim Forms.

Individ ual Creditors and those Qualify ing ILU Policy holders who may, in certain London very limited circum stances, bring a claim against the Com panies after the Bar EC1A 2FG

Date under the terms of the Amend ing Scheme.

Any Scheme Creditor to whom the Bar Date applies and who does not return Tel: +44 (0) 20 7296 2000 a Claim Form so as to be received by the Com panies before the Bar Date, and Fax: + 44 (0) 20 7296 2001 who has not elected to have its voting and proxy form or any other form that www.hoganlovells.com it has sub mitted (as the case may be) treated as its Claim Form, will be Ref: Joe Bannister/Will Beck deemed to have accepted the details of its claims (net of any Security Interest Solicitors to the Scheme Administrators 30 Maritime Reporter & Engineering News • MARCH 2016