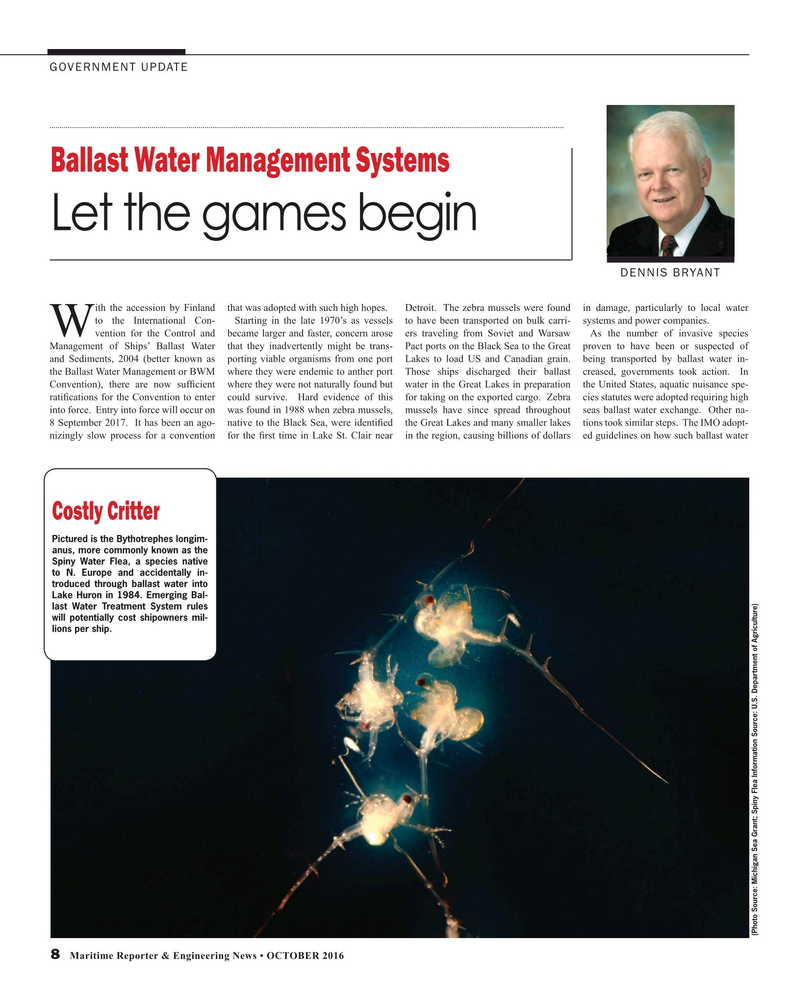 DENNIS BRYANT ith the accession by Finland that was adopted with such high hopes. Detroit. The zebra mussels were found in damage, particularly to local water to the International Con- Starting in the late 1970’s as vessels to have been transported on bulk carri- systems and power companies.

Wvention for the Control and became larger and faster, concern arose ers traveling from Soviet and Warsaw As the number of invasive species

Management of Ships’ Ballast Water that they inadvertently might be trans- Pact ports on the Black Sea to the Great proven to have been or suspected of and Sediments, 2004 (better known as porting viable organisms from one port Lakes to load US and Canadian grain. being transported by ballast water in- the Ballast Water Management or BWM where they were endemic to anther port Those ships discharged their ballast creased, governments took action. In

Convention), there are now suf? cient where they were not naturally found but water in the Great Lakes in preparation the United States, aquatic nuisance spe- rati? cations for the Convention to enter could survive. Hard evidence of this for taking on the exported cargo. Zebra cies statutes were adopted requiring high into force. Entry into force will occur on was found in 1988 when zebra mussels, mussels have since spread throughout seas ballast water exchange. Other na- 8 September 2017. It has been an ago- native to the Black Sea, were identi? ed the Great Lakes and many smaller lakes tions took similar steps. The IMO adopt- nizingly slow process for a convention for the ? rst time in Lake St. Clair near in the region, causing billions of dollars ed guidelines on how such ballast water

Pictured is the Bythotrephes longim- anus, more commonly known as the

Spiny Water Flea, a species native to N. Europe and accidentally in- troduced through ballast water into