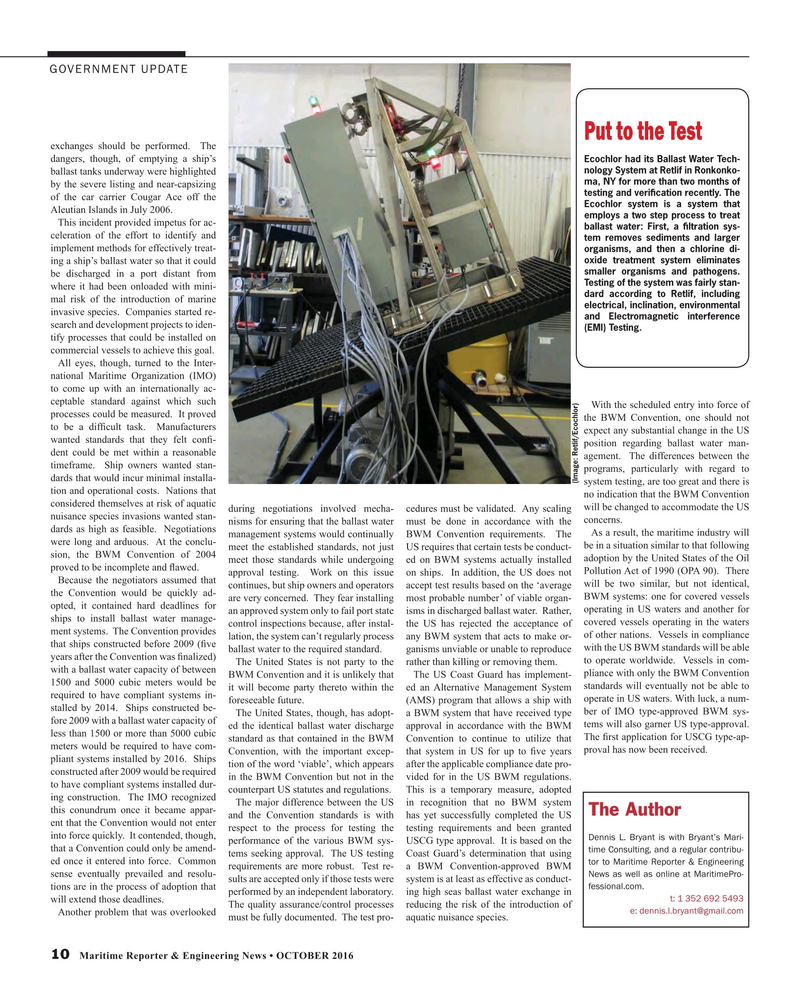 Put to the Test exchanges should be performed. The dangers, though, of emptying a ship’s

Ecochlor had its Ballast Water Tech- nology System at Retlif in Ronkonko- ballast tanks underway were highlighted ma, NY for more than two months of by the severe listing and near-capsizing testing and veri? cation recently. The of the car carrier Cougar Ace off the

Ecochlor system is a system that

This incident provided impetus for ac- ballast water: First, a ? ltration sys- celeration of the effort to identify and tem removes sediments and larger implement methods for effectively treat- organisms, and then a chlorine di- oxide treatment system eliminates ing a ship’s ballast water so that it could smaller organisms and pathogens. be discharged in a port distant from

Testing of the system was fairly stan- where it had been onloaded with mini- dard according to Retlif, including mal risk of the introduction of marine electrical, inclination, environmental invasive species. Companies started re- and Electromagnetic interference search and development projects to iden- (EMI) Testing.

tify processes that could be installed on commercial vessels to achieve this goal.

All eyes, though, turned to the Inter- national Maritime Organization (IMO) to come up with an internationally ac- ceptable standard against which such

With the scheduled entry into force of processes could be measured. It proved the BWM Convention, one should not to be a dif? cult task. Manufacturers expect any substantial change in the US wanted standards that they felt con? - position regarding ballast water man- dent could be met within a reasonable agement. The differences between the timeframe. Ship owners wanted stan- programs, particularly with regard to dards that would incur minimal installa- (Image: Retlif/Ecochlor) system testing, are too great and there is tion and operational costs. Nations that no indication that the BWM Convention considered themselves at risk of aquatic during negotiations involved mecha- cedures must be validated. Any scaling will be changed to accommodate the US nuisance species invasions wanted stan- nisms for ensuring that the ballast water must be done in accordance with the concerns.

As a result, the maritime industry will were long and arduous. At the conclu- be in a situation similar to that following sion, the BWM Convention of 2004 meet the established standards, not just US requires that certain tests be conduct- meet those standards while undergoing ed on BWM systems actually installed adoption by the United States of the Oil proved to be incomplete and ? awed.

approval testing. Work on this issue on ships. In addition, the US does not Pollution Act of 1990 (OPA 90). There

Because the negotiators assumed that continues, but ship owners and operators accept test results based on the ‘average will be two similar, but not identical, the Convention would be quickly ad-

BWM systems: one for covered vessels are very concerned. They fear installing most probable number’ of viable organ- opted, it contained hard deadlines for an approved system only to fail port state isms in discharged ballast water. Rather, operating in US waters and another for ships to install ballast water manage- control inspections because, after instal- the US has rejected the acceptance of covered vessels operating in the waters ment systems. The Convention provides of other nations. Vessels in compliance lation, the system can’t regularly process any BWM system that acts to make or- that ships constructed before 2009 (? ve ballast water to the required standard. ganisms unviable or unable to reproduce with the US BWM standards will be able years after the Convention was ? nalized) to operate worldwide. Vessels in com-

The United States is not party to the rather than killing or removing them.

BWM Convention and it is unlikely that The US Coast Guard has implement- 1500 and 5000 cubic meters would be it will become party thereto within the ed an Alternative Management System standards will eventually not be able to required to have compliant systems in- foreseeable future. (AMS) program that allows a ship with operate in US waters. With luck, a num- stalled by 2014. Ships constructed be-

The United States, though, has adopt- a BWM system that have received type ber of IMO type-approved BWM sys- fore 2009 with a ballast water capacity of ed the identical ballast water discharge approval in accordance with the BWM tems will also garner US type-approval. less than 1500 or more than 5000 cubic standard as that contained in the BWM Convention to continue to utilize that The ? rst application for USCG type-ap- meters would be required to have com-

Convention, with the important excep- that system in US for up to ? ve years proval has now been received.

pliant systems installed by 2016. Ships tion of the word ‘viable’, which appears after the applicable compliance date pro- constructed after 2009 would be required in the BWM Convention but not in the vided for in the US BWM regulations. to have compliant systems installed dur- counterpart US statutes and regulations. This is a temporary measure, adopted ing construction. The IMO recognized

The Author and the Convention standards is with has yet successfully completed the US ent that the Convention would not enter respect to the process for testing the testing requirements and been granted into force quickly. It contended, though,

Dennis L. Bryant is with Bryant’s Mari- performance of the various BWM sys- USCG type approval. It is based on the that a Convention could only be amend- time Consulting, and a regular contribu- tems seeking approval. The US testing Coast Guard’s determination that using ed once it entered into force. Common tor to Maritime Reporter & Engineering requirements are more robust. Test re- a BWM Convention-approved BWM

News as well as online at MaritimePro- sense eventually prevailed and resolu- sults are accepted only if those tests were system is at least as effective as conduct- fessional.com. tions are in the process of adoption that performed by an independent laboratory. ing high seas ballast water exchange in t: 1 352 692 5493 will extend those deadlines.

The quality assurance/control processes reducing the risk of the introduction of e: [email protected]

Another problem that was overlooked must be fully documented. The test pro- aquatic nuisance species.