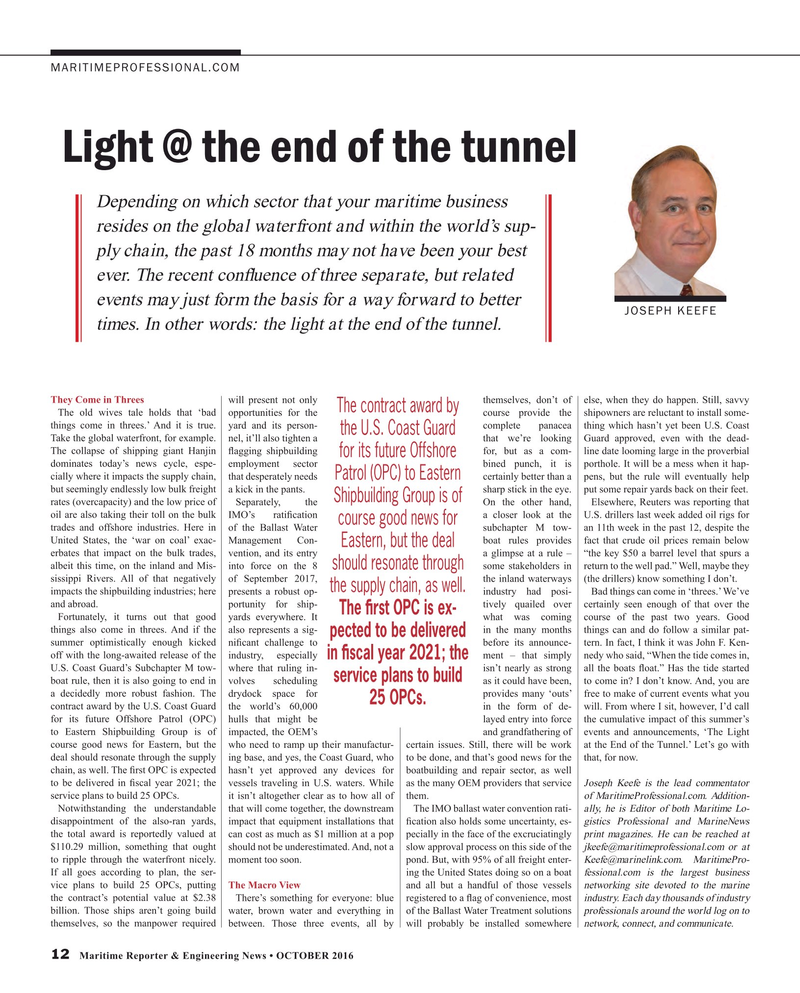 Light @ the end of the tunnel

Depending on which sector that your maritime business resides on the global waterfront and within the world’s sup- ply chain, the past 18 months may not have been your best ever. The recent con? uence of three separate, but related events may just form the basis for a way forward to better

JOSEPH KEEFE times. In other words: the light at the end of the tunnel.

They Come in Threes will present not only themselves, don’t of else, when they do happen. Still, savvy

The contract award by

The old wives tale holds that ‘bad opportunities for the course provide the shipowners are reluctant to install some- things come in threes.’ And it is true. yard and its person- complete panacea thing which hasn’t yet been U.S. Coast the U.S. Coast Guard

Take the global waterfront, for example. nel, it’ll also tighten a that we’re looking Guard approved, even with the dead-

The collapse of shipping giant Hanjin ? agging shipbuilding for, but as a com- line date looming large in the proverbial for its future Offshore dominates today’s news cycle, espe- employment sector bined punch, it is porthole. It will be a mess when it hap- cially where it impacts the supply chain, that desperately needs certainly better than a pens, but the rule will eventually help

Patrol (OPC) to Eastern but seemingly endlessly low bulk freight a kick in the pants. sharp stick in the eye. put some repair yards back on their feet.

Shipbuilding Group is of rates (overcapacity) and the low price of Separately, the On the other hand, Elsewhere, Reuters was reporting that oil are also taking their toll on the bulk IMO’s rati? cation a closer look at the U.S. drillers last week added oil rigs for course good news for trades and offshore industries. Here in of the Ballast Water subchapter M tow- an 11th week in the past 12, despite the

Eastern, but the deal erbates that impact on the bulk trades, vention, and its entry a glimpse at a rule – “the key $50 a barrel level that spurs a albeit this time, on the inland and Mis- into force on the 8 some stakeholders in return to the well pad.” Well, maybe they should resonate through sissippi Rivers. All of that negatively of September 2017, the inland waterways (the drillers) know something I don’t.

the supply chain, as well. impacts the shipbuilding industries; here presents a robust op- industry had posi- Bad things can come in ‘threes.’ We’ve and abroad. portunity for ship- tively quailed over certainly seen enough of that over the

Fortunately, it turns out that good yards everywhere. It what was coming course of the past two years. Good things also come in threes. And if the also represents a sig- in the many months things can and do follow a similar pat- pected to be delivered summer optimistically enough kicked ni? cant challenge to before its announce- tern. In fact, I think it was John F. Ken- off with the long-awaited release of the industry, especially ment – that simply nedy who said, “When the tide comes in, in ? scal year 2021; the

U.S. Coast Guard’s Subchapter M tow- where that ruling in- isn’t nearly as strong all the boats ? oat.” Has the tide started service plans to build boat rule, then it is also going to end in volves scheduling as it could have been, to come in? I don’t know. And, you are a decidedly more robust fashion. The drydock space for provides many ‘outs’ free to make of current events what you 25 OPCs.

contract award by the U.S. Coast Guard the world’s 60,000 in the form of de- will. From where I sit, however, I’d call for its future Offshore Patrol (OPC) hulls that might be layed entry into force the cumulative impact of this summer’s to Eastern Shipbuilding Group is of impacted, the OEM’s and grandfathering of events and announcements, ‘The Light course good news for Eastern, but the who need to ramp up their manufactur- certain issues. Still, there will be work at the End of the Tunnel.’ Let’s go with deal should resonate through the supply ing base, and yes, the Coast Guard, who to be done, and that’s good news for the that, for now. chain, as well. The ? rst OPC is expected hasn’t yet approved any devices for boatbuilding and repair sector, as well to be delivered in ? scal year 2021; the vessels traveling in U.S. waters. While as the many OEM providers that service Joseph Keefe is the lead commentator service plans to build 25 OPCs. it isn’t altogether clear as to how all of them. of MaritimeProfessional.com. Addition-

Notwithstanding the understandable that will come together, the downstream The IMO ballast water convention rati- ally, he is Editor of both Maritime Lo- disappointment of the also-ran yards, impact that equipment installations that ? cation also holds some uncertainty, es- gistics Professional and MarineNews the total award is reportedly valued at can cost as much as $1 million at a pop pecially in the face of the excruciatingly print magazines. He can be reached at $110.29 million, something that ought should not be underestimated. And, not a slow approval process on this side of the [email protected] or at to ripple through the waterfront nicely. moment too soon. pond. But, with 95% of all freight enter- [email protected] MaritimePro-

If all goes according to plan, the ser- ing the United States doing so on a boat fessional.com is the largest business vice plans to build 25 OPCs, putting The Macro View and all but a handful of those vessels networking site devoted to the marine the contract’s potential value at $2.38 There’s something for everyone: blue registered to a ? ag of convenience, most industry. Each day thousands of industry billion. Those ships aren’t going build water, brown water and everything in of the Ballast Water Treatment solutions professionals around the world log on to themselves, so the manpower required between. Those three events, all by will probably be installed somewhere network, connect, and communicate.