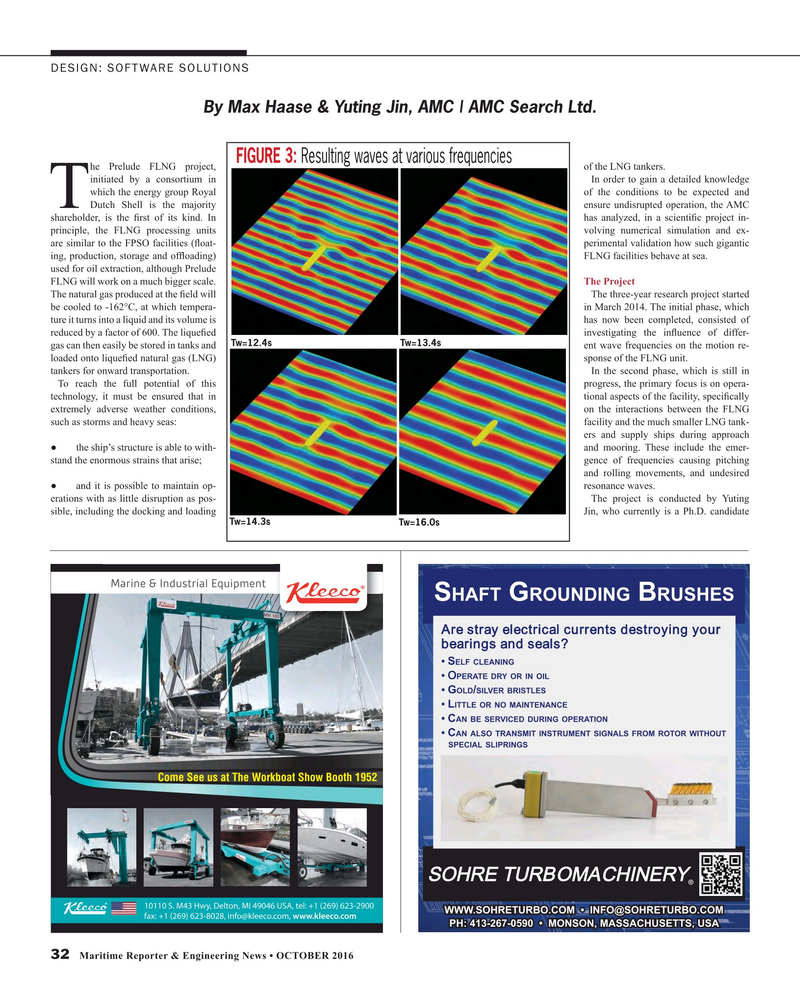 TDutch Shell is the majority ensure undisrupted operation, the AMC shareholder, is the ? rst of its kind. In has analyzed, in a scienti? c project in- principle, the FLNG processing units volving numerical simulation and ex- are similar to the FPSO facilities (? oat- perimental validation how such gigantic ing, production, storage and of? oading) FLNG facilities behave at sea.

used for oil extraction, although Prelude

FLNG will work on a much bigger scale. The Project

The natural gas produced at the ? eld will The three-year research project started be cooled to -162°C, at which tempera- in March 2014. The initial phase, which ture it turns into a liquid and its volume is has now been completed, consisted of reduced by a factor of 600. The lique? ed investigating the in? uence of differ-

Tw=12.4s Tw=13.4s gas can then easily be stored in tanks and ent wave frequencies on the motion re- loaded onto lique? ed natural gas (LNG) sponse of the FLNG unit.

tankers for onward transportation. In the second phase, which is still in

To reach the full potential of this progress, the primary focus is on opera- technology, it must be ensured that in tional aspects of the facility, speci? cally extremely adverse weather conditions, on the interactions between the FLNG such as storms and heavy seas: facility and the much smaller LNG tank- ers and supply ships during approach ? the ship’s structure is able to with- and mooring. These include the emer- stand the enormous strains that arise; gence of frequencies causing pitching and rolling movements, and undesired ? and it is possible to maintain op- resonance waves.

erations with as little disruption as pos- The project is conducted by Yuting sible, including the docking and loading Jin, who currently is a Ph.D. candidate

Are stray electrical currents destroying your bearings and seals?

?S ELF CLEANING ?O PERATE DRY OR IN OIL ?G / OLD SILVER BRISTLES ?L ITTLE OR NO MAINTENANCE ?C AN BE SERVICED DURING OPERATION ?C AN ALSO TRANSMIT INSTRUMENT SIGNALS FROM ROTOR WITHOUT

Come See us at The Workboat Show Booth 1952