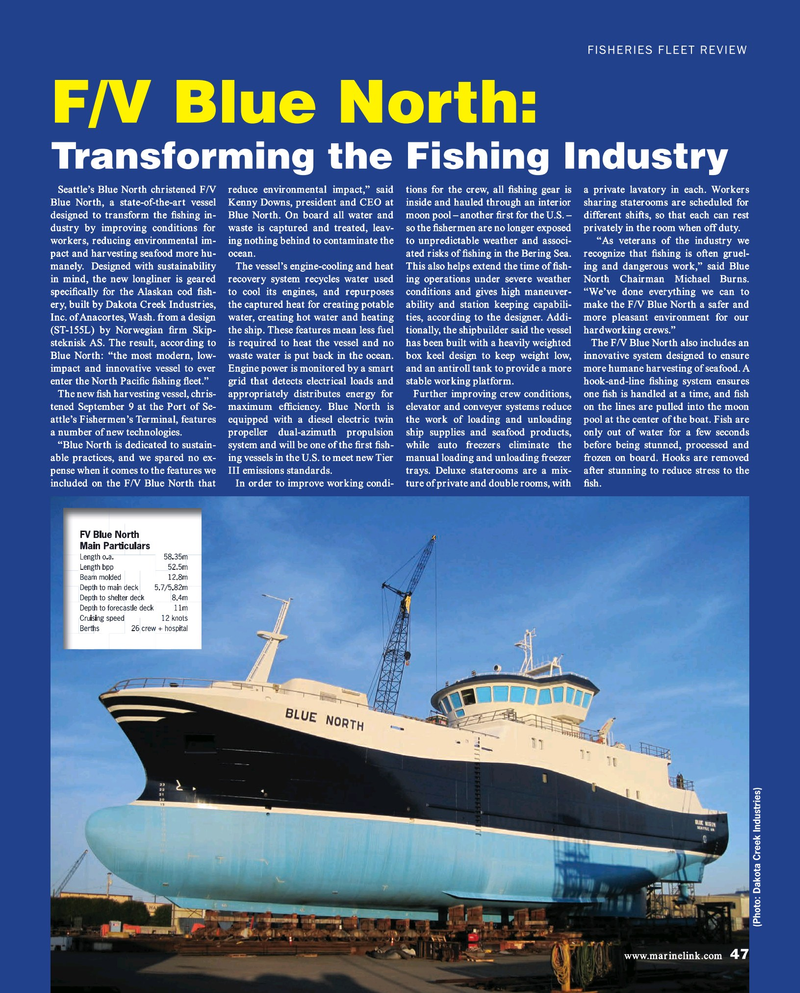 Seattle’s Blue North christened F/V reduce environmental impact,” said tions for the crew, all ? shing gear is a private lavatory in each. Workers

Blue North, a state-of-the-art vessel Kenny Downs, president and CEO at inside and hauled through an interior sharing staterooms are scheduled for designed to transform the ? shing in- Blue North. On board all water and moon pool – another ? rst for the U.S. – different shifts, so that each can rest dustry by improving conditions for waste is captured and treated, leav- so the ? shermen are no longer exposed privately in the room when off duty.

workers, reducing environmental im- ing nothing behind to contaminate the to unpredictable weather and associ- “As veterans of the industry we pact and harvesting seafood more hu- ocean. ated risks of ? shing in the Bering Sea. recognize that ? shing is often gruel- manely. Designed with sustainability The vessel’s engine-cooling and heat This also helps extend the time of ? sh- ing and dangerous work,” said Blue in mind, the new longliner is geared recovery system recycles water used ing operations under severe weather North Chairman Michael Burns. speci? cally for the Alaskan cod ? sh- to cool its engines, and repurposes conditions and gives high maneuver- “We’ve done everything we can to ery, built by Dakota Creek Industries, the captured heat for creating potable ability and station keeping capabili- make the F/V Blue North a safer and

Inc. of Anacortes, Wash. from a design water, creating hot water and heating ties, according to the designer. Addi- more pleasant environment for our (ST-155L) by Norwegian ? rm Skip- the ship. These features mean less fuel tionally, the shipbuilder said the vessel hardworking crews.” steknisk AS. The result, according to is required to heat the vessel and no has been built with a heavily weighted The F/V Blue North also includes an

Blue North: “the most modern, low- waste water is put back in the ocean. box keel design to keep weight low, innovative system designed to ensure impact and innovative vessel to ever Engine power is monitored by a smart and an antiroll tank to provide a more more humane harvesting of seafood. A enter the North Paci? c ? shing ? eet.” grid that detects electrical loads and stable working platform. hook-and-line ? shing system ensures

The new ? sh harvesting vessel, chris- appropriately distributes energy for Further improving crew conditions, one ? sh is handled at a time, and ? sh tened September 9 at the Port of Se- maximum ef? ciency. Blue North is elevator and conveyer systems reduce on the lines are pulled into the moon attle’s Fishermen’s Terminal, features equipped with a diesel electric twin the work of loading and unloading pool at the center of the boat. Fish are a number of new technologies. propeller dual-azimuth propulsion ship supplies and seafood products, only out of water for a few seconds “Blue North is dedicated to sustain- system and will be one of the ? rst ? sh- while auto freezers eliminate the before being stunned, processed and able practices, and we spared no ex- ing vessels in the U.S. to meet new Tier manual loading and unloading freezer frozen on board. Hooks are removed pense when it comes to the features we III emissions standards. trays. Deluxe staterooms are a mix- after stunning to reduce stress to the included on the F/V Blue North that In order to improve working condi- ture of private and double rooms, with ? sh.