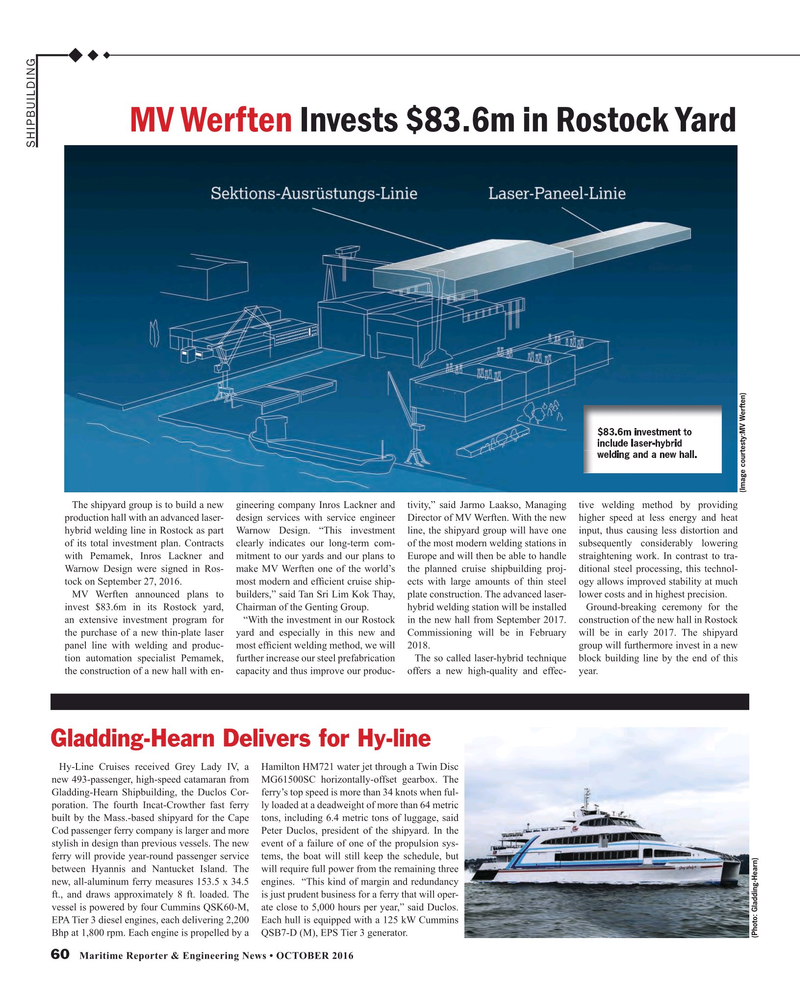 The shipyard group is to build a new gineering company Inros Lackner and tivity,” said Jarmo Laakso, Managing tive welding method by providing production hall with an advanced laser- design services with service engineer Director of MV Werften. With the new higher speed at less energy and heat hybrid welding line in Rostock as part Warnow Design. “This investment line, the shipyard group will have one input, thus causing less distortion and of its total investment plan. Contracts clearly indicates our long-term com- of the most modern welding stations in subsequently considerably lowering with Pemamek, Inros Lackner and mitment to our yards and our plans to Europe and will then be able to handle straightening work. In contrast to tra-

Warnow Design were signed in Ros- make MV Werften one of the world’s the planned cruise shipbuilding proj- ditional steel processing, this technol- tock on September 27, 2016. most modern and ef? cient cruise ship- ects with large amounts of thin steel ogy allows improved stability at much

invest $83.6m in its Rostock yard, Chairman of the Genting Group. hybrid welding station will be installed Ground-breaking ceremony for the an extensive investment program for “With the investment in our Rostock in the new hall from September 2017. construction of the new hall in Rostock the purchase of a new thin-plate laser yard and especially in this new and Commissioning will be in February will be in early 2017. The shipyard panel line with welding and produc- most ef? cient welding method, we will 2018. group will furthermore invest in a new tion automation specialist Pemamek, further increase our steel prefabrication The so called laser-hybrid technique block building line by the end of this the construction of a new hall with en- capacity and thus improve our produc- offers a new high-quality and effec- year.

Gladding-Hearn Shipbuilding, the Duclos Cor- ferry’s top speed is more than 34 knots when ful- poration. The fourth Incat-Crowther fast ferry ly loaded at a deadweight of more than 64 metric built by the Mass.-based shipyard for the Cape tons, including 6.4 metric tons of luggage, said

Cod passenger ferry company is larger and more Peter Duclos, president of the shipyard. In the stylish in design than previous vessels. The new event of a failure of one of the propulsion sys- ferry will provide year-round passenger service tems, the boat will still keep the schedule, but between Hyannis and Nantucket Island. The will require full power from the remaining three new, all-aluminum ferry measures 153.5 x 34.5 engines. “This kind of margin and redundancy ft., and draws approximately 8 ft. loaded. The is just prudent business for a ferry that will oper- vessel is powered by four Cummins QSK60-M, ate close to 5,000 hours per year,” said Duclos.

EPA Tier 3 diesel engines, each delivering 2,200 Each hull is equipped with a 125 kW Cummins