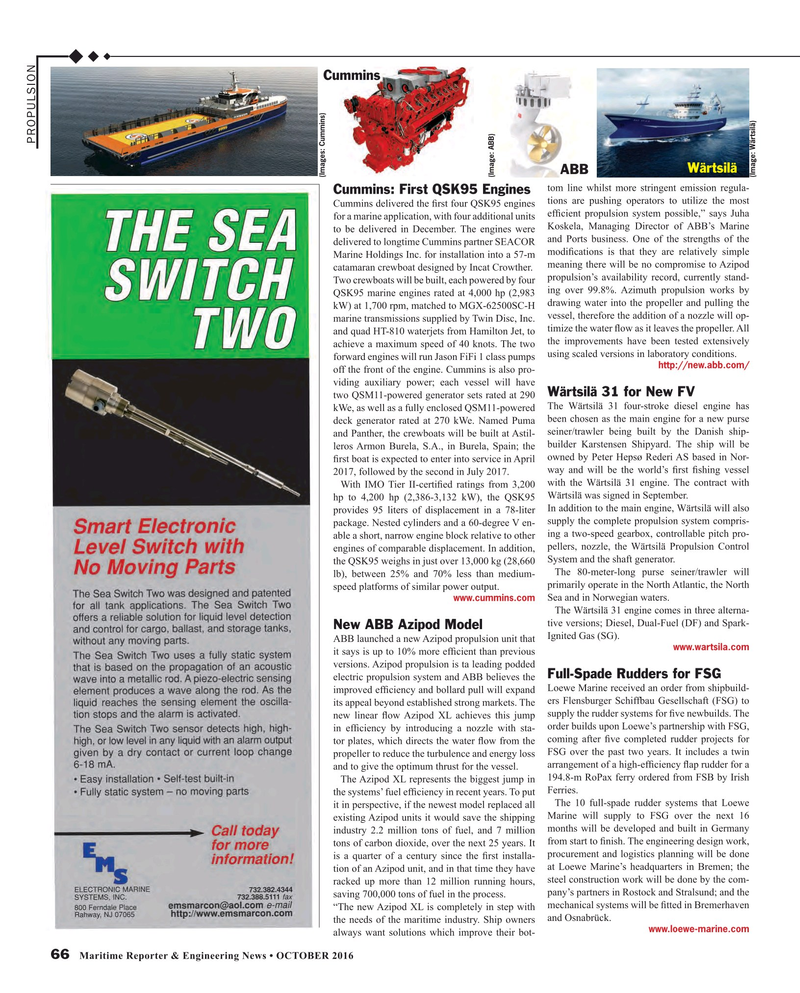 Cummins delivered the ? rst four QSK95 engines tions are pushing operators to utilize the most ef? cient propulsion system possible,” says Juha for a marine application, with four additional units to be delivered in December. The engines were Koskela, Managing Director of ABB’s Marine and Ports business. One of the strengths of the delivered to longtime Cummins partner SEACOR

Marine Holdings Inc. for installation into a 57-m modi? cations is that they are relatively simple meaning there will be no compromise to Azipod catamaran crewboat designed by Incat Crowther.

Two crewboats will be built, each powered by four

QSK95 marine engines rated at 4,000 hp (2,983 ing over 99.8%. Azimuth propulsion works by kW) at 1,700 rpm, matched to MGX-62500SC-H drawing water into the propeller and pulling the marine transmissions supplied by Twin Disc, Inc. vessel, therefore the addition of a nozzle will op- and quad HT-810 waterjets from Hamilton Jet, to timize the water ? ow as it leaves the propeller. All achieve a maximum speed of 40 knots. The two the improvements have been tested extensively using scaled versions in laboratory conditions.

forward engines will run Jason FiFi 1 class pumps http://new.abb.com/ off the front of the engine. Cummins is also pro- viding auxiliary power; each vessel will have

Wärtsilä 31 for New FV two QSM11-powered generator sets rated at 290 kWe, as well as a fully enclosed QSM11-powered The Wärtsilä 31 four-stroke diesel engine has deck generator rated at 270 kWe. Named Puma been chosen as the main engine for a new purse seiner/trawler being built by the Danish ship- and Panther, the crewboats will be built at Astil- leros Armon Burela, S.A., in Burela, Spain; the builder Karstensen Shipyard. The ship will be ? rst boat is expected to enter into service in April owned by Peter Hepsø Rederi AS based in Nor- way and will be the world’s ? rst ? shing vessel 2017, followed by the second in July 2017.

With IMO Tier II-certi? ed ratings from 3,200 with the Wärtsilä 31 engine. The contract with hp to 4,200 hp (2,386-3,132 kW), the QSK95 Wärtsilä was signed in September. provides 95 liters of displacement in a 78-liter In addition to the main engine, Wärtsilä will also supply the complete propulsion system compris- package. Nested cylinders and a 60-degree V en- able a short, narrow engine block relative to other ing a two-speed gearbox, controllable pitch pro- engines of comparable displacement. In addition, pellers, nozzle, the Wärtsilä Propulsion Control the QSK95 weighs in just over 13,000 kg (28,660 System and the shaft generator.

The 80-meter-long purse seiner/trawler will lb), between 25% and 70% less than medium- primarily operate in the North Atlantic, the North speed platforms of similar power output.

Sea and in Norwegian waters.

Full-Spade Rudders for FSG electric propulsion system and ABB believes the improved ef? ciency and bollard pull will expand Loewe Marine received an order from shipbuild- its appeal beyond established strong markets. The ers Flensburger Schiffbau Gesellschaft (FSG) to new linear ? ow Azipod XL achieves this jump supply the rudder systems for ? ve newbuilds. The order builds upon Loewe’s partnership with FSG, in ef? ciency by introducing a nozzle with sta- tor plates, which directs the water ? ow from the coming after ? ve completed rudder projects for propeller to reduce the turbulence and energy loss FSG over the past two years. It includes a twin arrangement of a high-ef? ciency ? ap rudder for a and to give the optimum thrust for the vessel.

The 10 full-spade rudder systems that Loewe it in perspective, if the newest model replaced all existing Azipod units it would save the shipping Marine will supply to FSG over the next 16 industry 2.2 million tons of fuel, and 7 million months will be developed and built in Germany tons of carbon dioxide, over the next 25 years. It from start to ? nish. The engineering design work, procurement and logistics planning will be done is a quarter of a century since the ? rst installa- tion of an Azipod unit, and in that time they have at Loewe Marine’s headquarters in Bremen; the racked up more than 12 million running hours, steel construction work will be done by the com- pany’s partners in Rostock and Stralsund; and the saving 700,000 tons of fuel in the process. “The new Azipod XL is completely in step with mechanical systems will be ? tted in Bremerhaven the needs of the maritime industry. Ship owners and Osnabrück. www.loewe-marine.com always want solutions which improve their bot- 66 Maritime Reporter & Engineering News • OCTOBER 2016