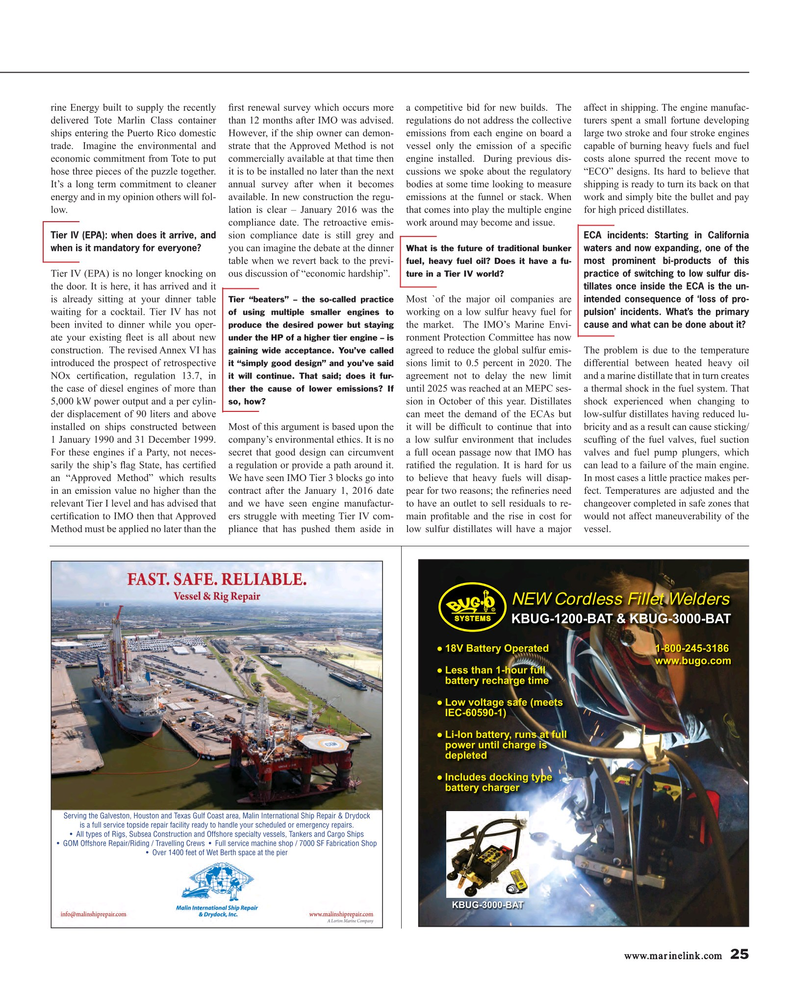 rine Energy built to supply the recently ? rst renewal survey which occurs more a competitive bid for new builds. The affect in shipping. The engine manufac- delivered Tote Marlin Class container than 12 months after IMO was advised. regulations do not address the collective turers spent a small fortune developing ships entering the Puerto Rico domestic However, if the ship owner can demon- emissions from each engine on board a large two stroke and four stroke engines trade. Imagine the environmental and strate that the Approved Method is not vessel only the emission of a speci? c capable of burning heavy fuels and fuel economic commitment from Tote to put commercially available at that time then engine installed. During previous dis- costs alone spurred the recent move to hose three pieces of the puzzle together. it is to be installed no later than the next cussions we spoke about the regulatory “ECO” designs. Its hard to believe that

It’s a long term commitment to cleaner annual survey after when it becomes bodies at some time looking to measure shipping is ready to turn its back on that energy and in my opinion others will fol- available. In new construction the regu- emissions at the funnel or stack. When work and simply bite the bullet and pay low. lation is clear – January 2016 was the that comes into play the multiple engine for high priced distillates. compliance date. The retroactive emis- work around may become and issue.

Tier IV (EPA): when does it arrive, and ECA incidents: Starting in California sion compliance date is still grey and you can imagine the debate at the dinner What is the future of traditional bunker when is it mandatory for everyone? waters and now expanding, one of the fuel, heavy fuel oil? Does it have a fu- table when we revert back to the previ- most prominent bi-products of this ture in a Tier IV world?

Tier IV (EPA) is no longer knocking on ous discussion of “economic hardship”. practice of switching to low sulfur dis- the door. It is here, it has arrived and it tillates once inside the ECA is the un- is already sitting at your dinner table Most `of the major oil companies are Tier “beaters” – the so-called practice intended consequence of ‘loss of pro- of using multiple smaller engines to waiting for a cocktail. Tier IV has not working on a low sulfur heavy fuel for pulsion’ incidents. What’s the primary produce the desired power but staying been invited to dinner while you oper- the market. The IMO’s Marine Envi- cause and what can be done about it?

under the HP of a higher tier engine – is ate your existing ? eet is all about new ronment Protection Committee has now gaining wide acceptance. You’ve called construction. The revised Annex VI has agreed to reduce the global sulfur emis- The problem is due to the temperature it “simply good design” and you’ve said introduced the prospect of retrospective sions limit to 0.5 percent in 2020. The differential between heated heavy oil it will continue. That said; does it fur-

NOx certi? cation, regulation 13.7, in agreement not to delay the new limit and a marine distillate that in turn creates ther the cause of lower emissions? If the case of diesel engines of more than until 2025 was reached at an MEPC ses- a thermal shock in the fuel system. That so, how?

5,000 kW power output and a per cylin- sion in October of this year. Distillates shock experienced when changing to der displacement of 90 liters and above can meet the demand of the ECAs but low-sulfur distillates having reduced lu- installed on ships constructed between Most of this argument is based upon the it will be dif? cult to continue that into bricity and as a result can cause sticking/ 1 January 1990 and 31 December 1999. company’s environmental ethics. It is no a low sulfur environment that includes scuf? ng of the fuel valves, fuel suction

For these engines if a Party, not neces- secret that good design can circumvent a full ocean passage now that IMO has valves and fuel pump plungers, which sarily the ship’s ? ag State, has certi? ed a regulation or provide a path around it. rati? ed the regulation. It is hard for us can lead to a failure of the main engine. an “Approved Method” which results We have seen IMO Tier 3 blocks go into to believe that heavy fuels will disap- In most cases a little practice makes per- in an emission value no higher than the contract after the January 1, 2016 date pear for two reasons; the re? neries need fect. Temperatures are adjusted and the relevant Tier I level and has advised that and we have seen engine manufactur- to have an outlet to sell residuals to re- changeover completed in safe zones that certi? cation to IMO then that Approved ers struggle with meeting Tier IV com- main pro? table and the rise in cost for would not affect maneuverability of the

Method must be applied no later than the pliance that has pushed them aside in low sulfur distillates will have a major vessel.