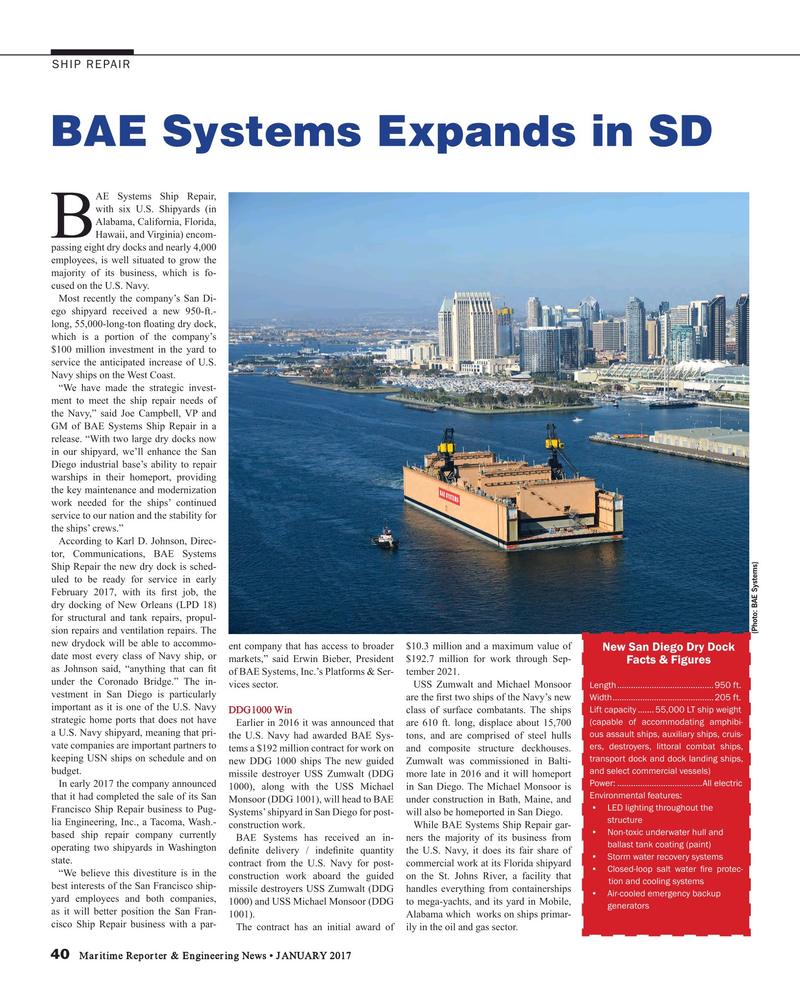 BHawaii, and Virginia) encom- passing eight dry docks and nearly 4,000 employees, is well situated to grow the majority of its business, which is fo- cused on the U.S. Navy.

Most recently the company’s San Di- ego shipyard received a new 950-ft.- long, 55,000-long-ton ? oating dry dock, which is a portion of the company’s $100 million investment in the yard to service the anticipated increase of U.S.

Navy ships on the West Coast.

“We have made the strategic invest- ment to meet the ship repair needs of the Navy,” said Joe Campbell, VP and

GM of BAE Systems Ship Repair in a release. “With two large dry docks now in our shipyard, we’ll enhance the San

Diego industrial base’s ability to repair warships in their homeport, providing the key maintenance and modernization work needed for the ships’ continued service to our nation and the stability for the ships’ crews.”

February 2017, with its ? rst job, the dry docking of New Orleans (LPD 18) for structural and tank repairs, propul- sion repairs and ventilation repairs. The (Photo: BAE Systems) new drydock will be able to accommo- ent company that has access to broader $10.3 million and a maximum value of

Facts & Figures as Johnson said, “anything that can ? t of BAE Systems, Inc.’s Platforms & Ser- tember 2021. under the Coronado Bridge.” The in- vices sector. USS Zumwalt and Michael Monsoor

vestment in San Diego is particularly

Lift capacity .......55,000 LT ship weight strategic home ports that does not have (capable of accommodating amphibi-

Earlier in 2016 it was announced that are 610 ft. long, displace about 15,700 a U.S. Navy shipyard, meaning that pri- ous assault ships, auxiliary ships, cruis- the U.S. Navy had awarded BAE Sys- tons, and are comprised of steel hulls vate companies are important partners to ers, destroyers, littoral combat ships, tems a $192 million contract for work on and composite structure deckhouses. keeping USN ships on schedule and on new DDG 1000 ships The new guided Zumwalt was commissioned in Balti- transport dock and dock landing ships, and select commercial vessels) budget.

In early 2017 the company announced 1000), along with the USS Michael in San Diego. The Michael Monsoor is

Environmental features: that it had completed the sale of its San Monsoor (DDG 1001), will head to BAE under construction in Bath, Maine, and • LED lighting throughout the

BAE Systems has received an in- ners the majority of its business from ballast tank coating (paint) operating two shipyards in Washington de? nite delivery / inde? nite quantity the U.S. Navy, it does its fair share of • Storm water recovery systems state.

contract from the U.S. Navy for post- commercial work at its Florida shipyard • Closed-loop salt water ? re protec- “We believe this divestiture is in the construction work aboard the guided on the St. Johns River, a facility that tion and cooling systems best interests of the San Francisco ship- missile destroyers USS Zumwalt (DDG handles everything from containerships • Air-cooled emergency backup yard employees and both companies, 1000) and USS Michael Monsoor (DDG to mega-yachts, and its yard in Mobile, generators as it will better position the San Fran- 1001). Alabama which works on ships primar- cisco Ship Repair business with a par-

The contract has an initial award of ily in the oil and gas sector.