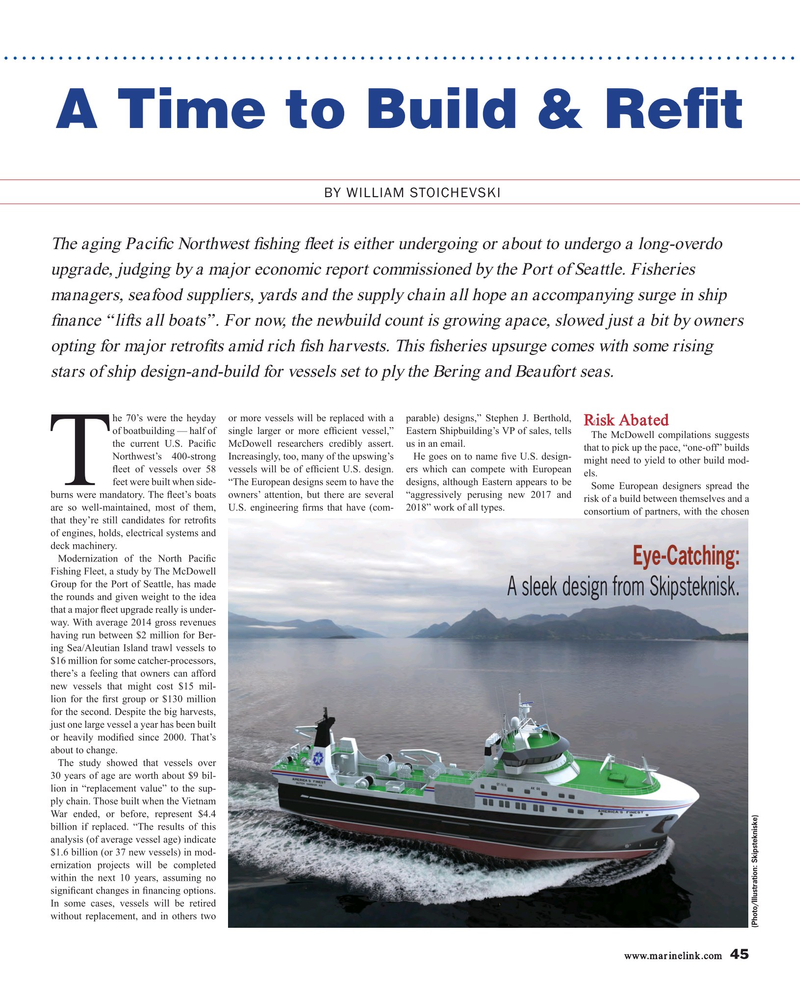 The aging Paci? c Northwest ? shing ? eet is either undergoing or about to undergo a long-overdo upgrade, judging by a major economic report commissioned by the Port of Seattle. Fisheries managers, seafood suppliers, yards and the supply chain all hope an accompanying surge in ship ? nance “lifts all boats”. For now, the newbuild count is growing apace, slowed just a bit by owners opting for major retro? ts amid rich ? sh harvests. This ? sheries upsurge comes with some rising stars of ship design-and-build for vessels set to ply the Bering and Beaufort seas. he 70’s were the heyday or more vessels will be replaced with a parable) designs,” Stephen J. Berthold,

The McDowell compilations suggests the current U.S. Paci? c McDowell researchers credibly assert. us in an email. that to pick up the pace, “one-off” builds

Northwest’s 400-strong Increasingly, too, many of the upswing’s He goes on to name ? ve U.S. design- might need to yield to other build mod- ? eet of vessels over 58 vessels will be of ef? cient U.S. design. ers which can compete with European els.

Tfeet were built when side- “The European designs seem to have the designs, although Eastern appears to be

Some European designers spread the burns were mandatory. The ? eet’s boats owners’ attention, but there are several “aggressively perusing new 2017 and risk of a build between themselves and a are so well-maintained, most of them, U.S. engineering ? rms that have (com- 2018” work of all types.

consortium of partners, with the chosen that they’re still candidates for retro? ts of engines, holds, electrical systems and deck machinery.

Modernization of the North Paci? c

Fishing Fleet, a study by The McDowell

Group for the Port of Seattle, has made

A sleek design from Skipsteknisk.

the rounds and given weight to the idea that a major ? eet upgrade really is under- way. With average 2014 gross revenues having run between $2 million for Ber- ing Sea/Aleutian Island trawl vessels to $16 million for some catcher-processors, there’s a feeling that owners can afford new vessels that might cost $15 mil- lion for the ? rst group or $130 million for the second. Despite the big harvests, just one large vessel a year has been built or heavily modi? ed since 2000. That’s about to change.

The study showed that vessels over 30 years of age are worth about $9 bil- lion in “replacement value” to the sup- ply chain. Those built when the Vietnam

War ended, or before, represent $4.4 billion if replaced. “The results of this analysis (of average vessel age) indicate $1.6 billion (or 37 new vessels) in mod- ernization projects will be completed within the next 10 years, assuming no signi? cant changes in ? nancing options.

In some cases, vessels will be retired without replacement, and in others two (Photo/Illustration: Skipstekniske) www.marinelink.com 45