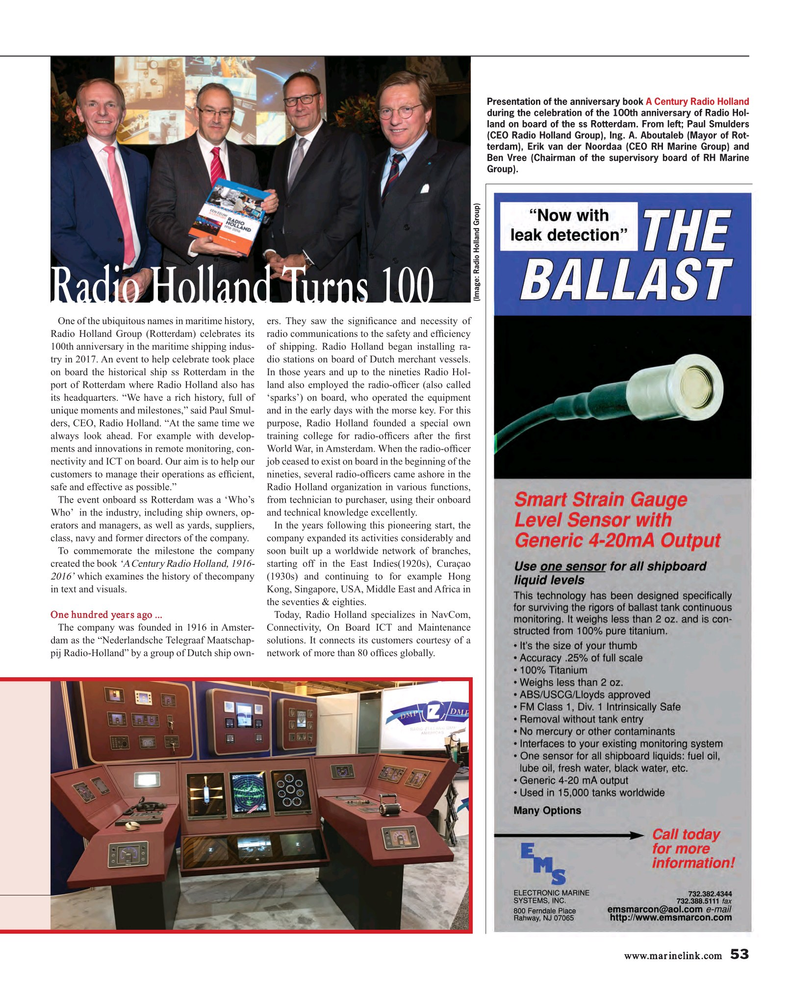 Ben Vree (Chairman of the supervisory board of RH Marine

One of the ubiquitous names in maritime history, ers. They saw the signi? cance and necessity of

Radio Holland Group (Rotterdam) celebrates its radio communications to the safety and ef? ciency 100th anniversary in the maritime shipping indus- of shipping. Radio Holland began installing ra- try in 2017. An event to help celebrate took place dio stations on board of Dutch merchant vessels. on board the historical ship ss Rotterdam in the In those years and up to the nineties Radio Hol- port of Rotterdam where Radio Holland also has land also employed the radio-of? cer (also called its headquarters. “We have a rich history, full of ‘sparks’) on board, who operated the equipment unique moments and milestones,” said Paul Smul- and in the early days with the morse key. For this ders, CEO, Radio Holland. “At the same time we purpose, Radio Holland founded a special own always look ahead. For example with develop- training college for radio-of? cers after the ? rst ments and innovations in remote monitoring, con- World War, in Amsterdam. When the radio-of? cer nectivity and ICT on board. Our aim is to help our job ceased to exist on board in the beginning of the customers to manage their operations as ef? cient, nineties, several radio-of? cers came ashore in the safe and effective as possible.” Radio Holland organization in various functions,

The event onboard ss Rotterdam was a ‘Who’s from technician to purchaser, using their onboard

Who’ in the industry, including ship owners, op- and technical knowledge excellently.

erators and managers, as well as yards, suppliers, In the years following this pioneering start, the class, navy and former directors of the company. company expanded its activities considerably and

To commemorate the milestone the company soon built up a worldwide network of branches, created the book ‘A Century Radio Holland, 1916- starting off in the East Indies(1920s), Curaçao 2016’ which examines the history of thecompany (1930s) and continuing to for example Hong in text and visuals. Kong, Singapore, USA, Middle East and Africa in the seventies & eighties.

One hundred years ago ... Today, Radio Holland specializes in NavCom,

The company was founded in 1916 in Amster- Connectivity, On Board ICT and Maintenance dam as the “Nederlandsche Telegraaf Maatschap- solutions. It connects its customers courtesy of a pij Radio-Holland” by a group of Dutch ship own- network of more than 80 of? ces globally.