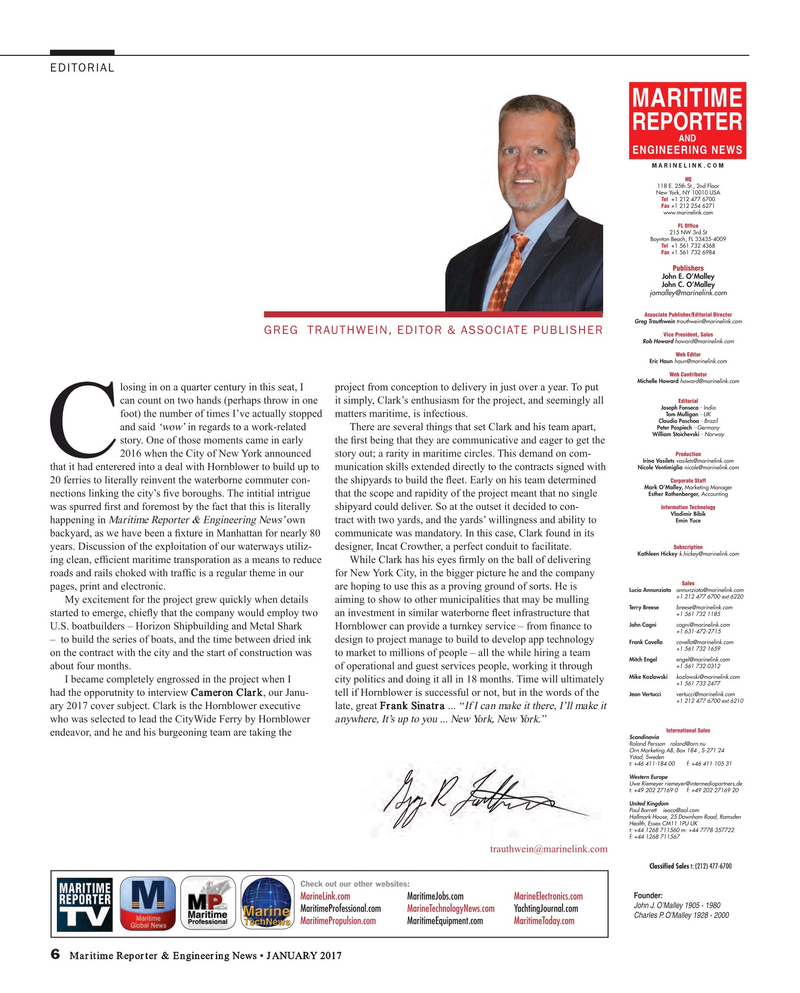 Michelle Howard howard@marinelink.com losing in on a quarter century in this seat, I project from conception to delivery in just over a year. To put

Editorial can count on two hands (perhaps throw in one it simply, Clark’s enthusiasm for the project, and seemingly all

Peter Pospiech - Germany and said ‘wow’ in regards to a work-related There are several things that set Clark and his team apart,

William Stoichevski - Norway story. One of those moments came in early the ? rst being that they are communicative and eager to get the

Production 2016 when the City of New York announced story out; a rarity in maritime circles. This demand on com-

Nicole Ventimiglia nicole@marinelink.com that it had enterered into a deal with Hornblower to build up to munication skills extended directly to the contracts signed with

Corporate Staff 20 ferries to literally reinvent the waterborne commuter con- the shipyards to build the ? eet. Early on his team determined

Esther Rothenberger, Accounting nections linking the city’s ? ve boroughs. The intitial intrigue that the scope and rapidity of the project meant that no single

Information Technology was spurred ? rst and foremost by the fact that this is literally shipyard could deliver. So at the outset it decided to con-

Emin Yuce happening in Maritime Reporter & Engineering News’ own tract with two yards, and the yards’ willingness and ability to backyard, as we have been a ? xture in Manhattan for nearly 80 communicate was mandatory. In this case, Clark found in its

Subscription years. Discussion of the exploitation of our waterways utiliz- designer, Incat Crowther, a perfect conduit to facilitate.

Kathleen Hickey k.hickey@marinelink.com ing clean, ef? cient maritime transporation as a means to reduce While Clark has his eyes ? rmly on the ball of delivering roads and rails choked with traf? c is a regular theme in our for New York City, in the bigger picture he and the company

Sales pages, print and electronic. are hoping to use this as a proving ground of sorts. He is

Terry Breese breese@marinelink.com +1 561 732 1185 started to emerge, chie? y that the company would employ two an investment in similar waterborne ? eet infrastructure that

U.S. boatbuilders – Horizon Shipbuilding and Metal Shark Hornblower can provide a turnkey service – from ? nance to 631-472-2715 +1 – to build the series of boats, and the time between dried ink design to project manage to build to develop app technology

Frank Covella covella@marinelink.com +1 561 732 1659 on the contract with the city and the start of construction was to market to millions of people – all the while hiring a team

Mitch Engel engel@marinelink.com +1 561 732 0312 about four months. of operational and guest services people, working it through

I became completely engrossed in the project when I city politics and doing it all in 18 months. Time will ultimately +1 561 733 2477 had the opporutnity to interview Cameron Clark, our Janu- tell if Hornblower is successful or not, but in the words of the

International Sales endeavor, and he and his burgeoning team are taking the

Check out our other websites: